Most of the storefronts on Beacon’s Main Street West End were boarded up. The Cup & Saucer Tea Room shared a block with a religious fundamentalist art gallery, a gypsy fortune-teller and a Dominican bodega, across the street from a Puerto Rican take-out restaurant.

What sounds like a street scene from a 1970s film was actually Beacon just 10 years ago. This is how John Gilvey describes the neighborhood in the year 2003, when he and his wife, Wendy, Michael Benzer and Jennifer Smith bought an old firehouse that could be a showroom for their handcrafted glassware.

“Michael and I had talked for years about having a retail location but we thought we’d have to do it in a place like Cape Cod, Woodstock or Rhinebeck. We had been making glass in Beacon since 1984 but had never sold any of it here,” Gilvey explained. “It was a very different place than it is now.”

This weekend, on Saturday, Oct. 12, Hudson Beach Glass celebrates the 10th anniversary of its gallery and glass-blowing demonstration studio at 162 Main St. Their original workshop on Maple Street has been active since 1987.

It was the same year that Dia opened an art museum here. “I saw how the Dia building in Chelsea changed that neighborhood,” Gilvey continued. “We knew something good would happen but I can’t say we knew something this good was going to happen.” 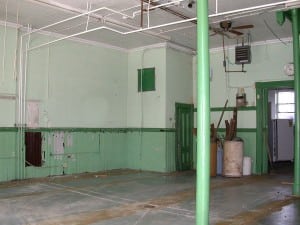 The front room of the firehouse in 2003.

After looking at properties that are now Dim Sum Go Go, Alps Sweet Shop and the Japanese restaurant, Isamu, Gilvey and Benzer settled on the 19th-century brick firehouse that had ceased operations more than 23 years earlier and was housing a food bank. The artists received a Section 108 HUD loan guarantee at an extremely low rate, but still needed the down payment to close. They bought the building in August 2002 for $270,000 and invested an additional $200,000 on renovations.

“The entire building was painted red and we had to replace every door and window. There wasn’t any usable plumbing or electrical,” said Gilvey. “By winter, we had a building with no heat, no windows and a mass of wires.”

For Beacon’s first-ever Second Saturday (Beacon Arts Community Association launched the same year), the team opened their doors to the public with just one shelf of glassware and a propane heater. The glass blowing furnace was lit up soon after. Hudson Beach Glass’s grand opening celebration was held in October 2003, where they served homemade sushi and projected Werner Herzog’s film, Heart of Glass, on the side of the building.

Michael Benzer first met John Gilvey in 1975, when Michael was a teenager learning how to blow glass at the Bucks Rock Performing and Creative Arts Camp in New Milford, Conn. John was one of his teachers. They stayed in touch during Michael’s studies at Rochester Institute of Technology (where the School for American Crafts is located) and through his move to Beacon in 1983. Benzer purchased the 14,000-square-foot warehouse on Maple Street to grow his glass tile business, Architectural Glass, Inc. Jennifer Smith, also a graduate of RIT, moved to Beacon in 1986 to work for Benzer. They were married in 1990.

John and Wendy Gilvey, who recently celebrated their 40th wedding anniversary, were already living in Poughquag, N.Y., where they still have a home and studio. In 1980, John “got lucky” with a bunch of department stores, including Bergdorf Goodman and Neiman Marcus. At one time, he was the second full-time employee of Dick Polich, founder of Polich Tallix Fine Art Foundry, which was then located in Nelsonville. Wendy was the first.

Janet Griffin has been working at Hudson Beach Glass since 1987. “I met John and Wendy when they had a studio in Wingdale in 1977,” she said. “They hired me full-time when Wendy was pregnant with their third child and things had reached critical mass.” Janet was responsible for the design and layout of the firehouse. Her background in graphic design, photography and theater proved instrumental in coordinating trade shows and managing customer service.

Early in his career, Michael Benzer found a photographic lens-grinding device at a junkyard in Rochester and used it as a mold for a glass bowl, grinding off the bottom so that it would sit on a flat surface. It became a signature piece for Hudson Beach Glass and sold at trade shows. A friend with a store in New Hampshire thought the bowl looked better sitting on one of the company’s glass tiles. The rest is history.

“It was an instant success,” said Wendy Gilvey. “The concept of this rounded bowl resting on a base was totally new. No one had seen anything like it. We had seven initial designs and only five colors, so we started mixing and matching for variety.” Using a divot to attach the two pieces, the company expanded on their business using this process.

Half of the glassware at the store is made at the Maple Street workshop, at the demonstration studio on Main Street, or at John and Wendy’s home-based studio. In addition to selling their own designs, they represent about 30 other artists. 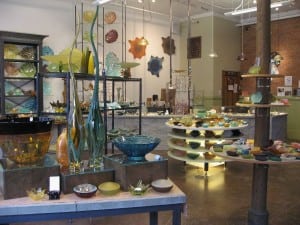 In 2008, Hudson Beach Glass felt the market crash along with the rest of the country. “In the 80s and 90s, we would see at least 100 different glass blowers at trade shows making totally diverse product. A lot of those studios closed,” said John Gilvey. “When the world tanked, a lot of our retailers said ‘I’m done.’ We lost about 40 percent of our wholesale business.”

“But the movement was waning, too,” he continued, referring to the “subsistence-crafting” trend born out of the 1970s counter-culture. “But retail has since gotten much more interesting. We’re going more into design stores and furniture shops. I think our stuff is well designed and I know it’s well made, and people appreciate that.”

According to Benzer, their wholesale business is holding steady from five years ago but retail is improving. “2012 was our best year since opening and 2013 is on track for the same, maybe better,” he said.

Talking about the new artisanal movement currently sweeping the country, John Gilvey jokingly promotes Hudson Beach Glass as “locally blown.” But do they see themselves as pioneers in the Hudson Valley?

“We were blessed to be in Beacon when it all happened but I don’t think we started anything,” he said. “The American Crafts Council promoted the idea of an American craft gallery in the early 1970s. They were founded in Rhinebeck and based in Highland for years. Aileen Osborne Webb, born in Garrison and married to Vanderbilt Webb, started the American Crafts Council in 1936 during the Great Depression.” 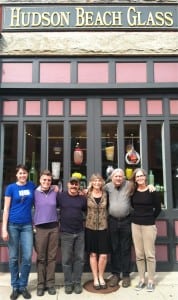 “First of all, the word ‘craft’ is outdated. My kids wouldn’t be seen at a craft show,” said Wendy Gilvey. “Not many young people come into our store, but we hope their interest in locally-produced food and drink might extend to us.”

Hudson Beach Glass added a demonstration studio at the firehouse because “it’s a great spectator craft,” said Wendy Gilvey. The store and the studio are open seven days a week, except for major holidays. Bead making and glass blowing classes are offered regularly.

Kathleen Andersen, who blows glass in the Main Street studio, has been working at Hudson Beach Glass for five years. “They are some of the hardest working people I know, but they still find time to encourage me and my ideas for the studio and for my own art,” said Andersen. “They have taught me so much about what art can be and how to share it with others. What started as a job has become a way of life for me. The people who started as my employers and co-workers have become my family.”

For the party on Saturday, The Costellos will perform at 7:00 p.m. Bouyant Sea, a solo show of paintings by the Gilvey’s daughter, Khara, is being exhibited in the fine art gallery on the second floor. For Breast Cancer Awareness month, Hudson Beach Glass is selling a limited edition pink glass, for which all proceeds will go to local support groups.