The Philipstown Planning Board this week again reviewed plans for a primary school at the current Plumbush restaurant, moving toward a possible vote in November, even as members continued to question the lack of a sprinkler system for the building.

Meeting Thursday night (Oct. 17), the board members went through details of the proposed Manitou School, a for-profit enterprise being developed by Manitou Properties Co. LLC, whose executives include the founder of a pre-school in Garrison. At present, Plumbush Inn at the Parrott House, catering to weddings and similar events, occupies the premises, located just past Cold Spring and Nelsonville on Route 9D at Peekskill and Moffatt Roads.

Fire safety remains a concern for the proposed school at the Plumbush property.

Fire-safety concerns initially surfaced in September, after board members heard the school would not have a sprinkler system. For Thursday’s session, Glennon Watson, of Badey Watson Surveying & Engineering P.C., the Manitou Properties representative, provided copies of New York State requirements for fire safety in schools. According to the state building code, schools must provide sprinklering unless each classroom has at least one exterior exit at the ground level.

At Plumbush, every classroom “will have direct access to the outdoors,” Watson said. “We will meet the code.”

Watson’s materials also revealed that the state also does not demand that a building the size of Plumbush provide an elevator, another concern raised earlier.

However, as work on other aspects of the plan got wrapped up and the Planning Board did not object to a suggestion by its attorney that it might vote on the project in November, some members raised further questions about fire safety. A fire in 2010 temporarily hindered but did not permanently shut down Plumbush operations. 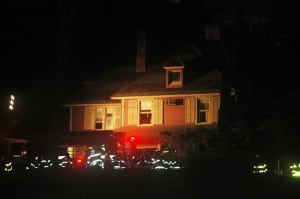 Firefighters work at Plumbush during a fire in 2010.

“That’s an old wooden horrible building that’s ancient that will go up like a tinderbox. It’s very scary,” said Pat Sexton, a Planning Board member who recalled that her own home burned in less than three minutes after a lightning strike. “It doesn’t seem like the people building the school have any concerns about a fire. I don’t understand it. [If] you’re going to build something like this, then you’re going to have to pay for a sprinkler system in there to make it safe.”

She pointed out that the Planning Board tells applicants to ensure safe traffic patterns and environmental protection and meet other stipulations and wondered why “we do nothing about an old wooden building over 100 years old.”

Board Member Anthony Merante expressed similar views. “If we have no options in this, why is this board even here?” he asked. “The biggest thing for me is this sprinkler business. There is a calling here above and beyond what the code calls for.” He added that one spark could cause a fire and questioned the state of the electrical wiring in the building. “I’m really concerned about some of these things that can lead to fire. To me this is very critical,” Merante said.

Planning Board Chairman Michael Leonard said the issue “isn’t just like sprinklers or no sprinklers. There is more” to the matter, including activities that fall under the jurisdiction of the town code enforcement and building inspection department.

Applicants must follow a separate fire-safety plan, he explained. “There’s a lot to a fire plan. They’re going to have to meet fire standards that are beyond us; there are limitations for us” in purview. Leonard said that answers to his own inquiries “gave me assurance, to know there is a process beyond us” for addressing fire safety. “Obviously, we’re not the only step in the process.”

A few other possible loose ends appeared, also, including a request from the Cold Spring Cemetery management that a fence between the properties be upgraded. “We’ll do it, provided it’s our fence” and not the cemetery’s, Watson replied. He likewise agreed to a request from Planning Board Member Neal Zuckerman for a diagram showing exterior exits from all the planned classrooms and, in general, said that any other unresolved items could be dealt with before a board meeting next month.

Adam Rodd, the board’s attorney, proposed that the board consider voting on the school plans in November. He offered to prepare the necessary resolution, and Leonard concurred.

In other business, the Planning Board referred to the Zoning Board of Appeals an application for a subdivision of the Winter Hill estate on Snake Hill Road into two sections, to allow the owner to give one piece – about one-third of the total existing holding – to New York State for park land. The state owns adjacent land around the historic North Redoubt military site.