Philipstown’s re-zoning furor propelled small-business owner Lee Erickson into public affairs some four years ago and after the debate ended he eschewed a return to a quiet life. 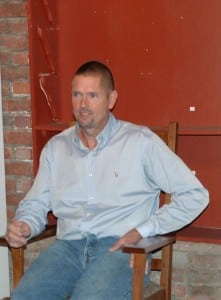 A few months after the Town Board in 2011 approved the rezoning, Erickson ran as the Republican candidate for Philipstown supervisor against the incumbent, Democrat Richard Shea. He lost, but this year came back to seek office again – not as contender for supervisor but as a candidate for councilman. [The supervisor and four councilmen / councilwomen or councilors make up the Town Board; no separate town “council” exists.]

Erickson, representing both the Republican and Conservative parties, operates a woodworking business, serves with the Garrison Volunteer Fire Company, and coaches children’s football. On Thursday morning (Oct. 24) in an interview with Philipstown.info/The Paper, he discussed his views on budget matters, dirt roads, the Butterfield Hospital redevelopment project, inter-municipal consolidation, and other issues.

Born in Brewster, he came to Philipstown as a 1-year-old. “Before several years ago, I wasn’t too much involved,” he said. Then “the town kind of grabbed me and pulled me in.” Talk of a possible change in zoning of his property from commercial to residential left him feeling “I can’t believe this happening,” he said. “I didn’t realize the town could come along and rezone you like that.” So he became active and, in time “saw I could do a lot of good, staying involved.”

Ticking off reasons for running, he said “I want to see things stay good here.” He suggested various ways to achieve that goal, including initiatives to “expand the town tax base if we could” through “smart, targeted business growth. I think we need to have a more pro-active role in seeking out businesses,” as a town alone or in conjunction with Putnam County, he said.

To reduce expenses and meet the tax-hike cap, currently 1.66 percent yearly, along with suitable economic growth he advocated consolidating suitable government functions, more Recreation Department revenue-generating events and programs, and being vigilant about such things as highway department operations and employee union negotiations.

“Yeh,” he would take a relatively tough stance in holding the line on spending during contract talks, he said. If unions want a $1.50-an-hour wage increase, “I’d say, ‘show me why,’” he said. “On the other hand, if I see they’re really being short-changed,” he would support an increase, he said.

He also suggested that Philipstown and Cold Spring “could probably merge the highway departments … in such a way you might be able to cut costs” and might consolidate justice courts, share an inter-governmental quarters at a redeveloped Butterfield site or elsewhere, and adopt other forms of consolidation and cooperation.

In terms of services, “I don’t see too much we could get out of” providing, he added. “I don’t see we can cut” one or more services entirely. “You can’t cut [your way] to prosperity.” Instead, he reiterated his call for “creating revenue through smart business” growth. “If you don’t work those revenue streams better,” when the tax cap hits, “it’s going to hurt” the town, he said.

Listing other concerns, Erickson mentioned that “seniors are a big issue.” For years, residents and town and village officials have wanted a senior-citizen center, perhaps at Butterfield. During the 2011 campaign, it appeared that Butterfield redevelopment was moving forward in good order, Erickson said. Yet, “in two years we’ve gone backward.”

Discussions have occurred about a senior-citizen center, saving the post office, rezoning the site, and related items, at village, town, or county levels. There are “little meetings, all over the place, but nobody is sitting down at one table,” Erickson pointed out, promising, if elected to speak loudly in favor of gathering all the parties “in one room” to thrash out problems. “Is there a letter of intent from everybody lined up here” – the village, town, and county governments that could take space in a common municipal building – to “show there’s a total community commitment?” he wondered.

He also cited dealing with dirt roads as an ongoing challenge and called for paving those with grades of 15 percent or more. Doing so, he proposed, would save money – “we’ve spent a lot over the years over nothing” – and protect both the environment and the property rights of residents whose land is at risk of contamination from materials applied to dirt roads. “I’m in favor of paving steep slopes where there is constant run-off,” Erickson said. “One of the concerns I have is the tax money we spend, the wash-outs.”

If dirt-road advocates find a feasible alternative to paving, he would agree to use that approach, he said. “If not,” if no such solution exists, “then we have to seriously consider paving dirt roads” – the stretches with steep grades. Wooded areas nearby “are devastated” by dirt-road surface treatments, he said. “It’s eventually getting into the aquifer” and threatening water supplies. “That’s no good.”

As a member of the GVFC awaiting special training to “jump in” to burning buildings, Erickson also sees a need for more public awareness of the fact its members “are all volunteers,” like those of the town’s other fire companies. “It’s 24/7,” he said of the responsibility. “I became active because they’re always short of manpower.”

If elected, he pledged to excuse himself from votes on GVFC issues, “but I’d like to stay at the table as long as I can” to give input. At the same time, he said, he has warned his GVFC colleagues that “I’m going to let it be known” if they do something questionable financially or otherwise.