In a telephone call to Philipstown.info, Shea said that shortly earlier he had spoken with Jonathan Rose, the Garrison Institute founder, who “assured us we’re going to have continued use of the land in back” of the Recreation Center. “This is good news,” Shea said. 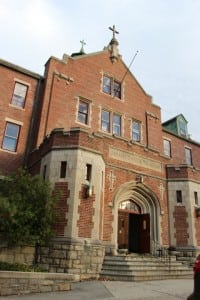 Shea’s announcement dispels a specter that arose ghoul-like in the pages of The Putnam County News and Recorder newspaper just before Halloween – and the Nov. 5 town election – that the subdivision of land near the Recreation Center by the Open Space Conservancy would end public access to the playing field and threaten the historic Hamilton Fish mansion, headquarters of the Garrison Institute.

The conservancy is the land-acquisition affiliate of the Open Space Institute, a leading environmental-land preservation organization. Several years ago, OSI gave Philipstown the Recreation Center building, part of a 22-acre tract, as well as 18 acres for the separate Town Park on Route 9D. After at least four months of review, in August the Philipstown Planning Board approved the subdivision of Open Space land bordering the Recreation Center into three lots, each 20 acres. No public objections or outcry ensued.

Shea explained that the Garrison Institute had been in the process of buying the land it occupies, that he had held discussions with institute officials, and that he understood that the transaction had been finalized, but could not divulge anything until Friday when he located Rose, who is away from Philipstown. He said that in confirming the purchase, Rose mentioned the back field and told him: “‘Of course you can continue to use it. We’re neighbors.’

The subdivision issue became contentious at an Oct. 21 candidates’ debate sponsored by the PCNR and spilled over into an article in that newspaper and campaign advertising. At the PCNR debate, prefacing her question with the statement that “the Hamilton Fish Mansion is in danger of being destroyed,” PCNR staff member Annie Chesnut asked Town Board candidates if the Open Space application had been fast-tracked by the town Planning Board.

An article by reporter Tim Greco in the PCNR Oct. 30 repeated the query about a decision “fast-tracked” and referred to “a subdivision for residential housing,” as if scores of new homes would soon materialize on Open Space-divested land. The area is zoned Institutional Conservation-Rural Conservation, specifying 20-acre parcels. The Oct. 30 PCNR also contained a political ad for Lee Erickson, Republican candidate for a Town Board councilor post, arguing that Shea’s leadership of the town government has led to “the loss of the Rec Center back lawn to a new subdivision.”

In Tuesday’s election, the chairman of the Philipstown Planning Board, Mike Leonard, is a Democratic candidate for a Town Board slot. So is John Van Tassel, a current Town Board councilor seeking a second four-year term; with Shea (who runs unopposed) they comprise the Democratic ticket.

On Wednesday night, in an interview with Philipstown.info, Shea expressed bewilderment at the sudden insinuations about Planning Board treatment of the Open Space subdivision, describing it as a form of political attack. Friday he spoke in a similar vein.  “I’m completely baffled” by the negativity in print in the PCNR, he said. “It seems to be intentional.”

He described his efforts since “the day we heard the property was going to be subdivided” to ensure the town did not lose use of the back field. “People need to be cognizant that the Town Board is doing its job. We’re not sitting back” and just letting things happen. “We are pro-active,” he emphasized.

Shea also praised Open Space and the Garrison Institute. “Both are good organizations to have in Philipstown,” he said. “Someone trying to cast doubt about Open Space has an uphill battle. They gave us our Rec Center; they gave us our town park – millions of dollars of real estate for our use. To me OSI is a hero in this town.”