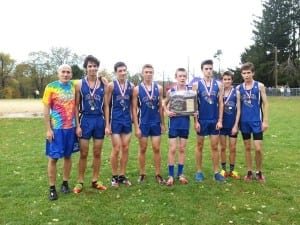 Hard work during the regular season has been paying dividends for Haldane’s athletic teams in playoff action this week.

The boys’ and girls’ cross country teams both won Section 1 Class D championships and will participate in the State Championships at Queensbury High School in Queensbury, N.Y., on Saturday, Nov. 9. The boys’ race begins at 9:25 a.m. and the girls get underway at 11:10 a.m.

Boys’ soccer won the Class C Section 1 Championship with a 2-0 victory over Solomon Schechter and went on to defeat S.S. Seward Institute in the Regional Semi-Final. They now advance to the Regional Final against Friends Academy on Saturday, Nov. 9, at Arlington High School in Poughkeepsie. The game is scheduled for 12:30 p.m., however Haldane Athletic Director Tom Cunningham is seeking a time change. Please check the Haldane website for details.

The football team plays in the sectional final at noon on Saturday, Nov. 9, at Mahopac High School, facing Tuckahoe.

The girls’ volleyball team won their 11th straight Class D Section 1 Championship with a 3-0 victory over Keio Academy and will play in the Regional Final at 6 p.m. on Friday, Nov. 8, facing Shelter Island High School at Pelham High School.

Details regarding upcoming games can be found on the Haldane website at haldaneschool.org.

One thought on “Banner Week for Haldane Athletes”