Veterans Day (Nov. 11) comes and like many holidays quickly passes. Perhaps we pause and reflect for a moment on the sacrifice and hard-bitten service of those in the military and their families. Some of us say “thank you for your service” if the opportunity arises. A relatively few attend a ceremony of remembrance and gratitude unless it is part of a larger event such as a football game.

For veterans themselves, every day is Veterans Day. For the living, especially those who served in war zones, every day recalls the dead who once stood next to them. For the wounded, and there are many of them because we can now preserve life with miraculous effectiveness, every day carries a reminder of the loss, pain and physical redefinition of the person in the world.

American culture, despite its penchant for violence in its many forms of entertainment, does not easily account in the real social world for those who choose to wear the uniform and train for combat and risk death or permanent harm. Citizens no longer bear an obligation to divert career aspirations when the government declares that war is necessary. Accordingly, those who have gone (and still go) to war in Iraq and Afghanistan today return to a world that has paid scant attention to, let alone appreciation for, the all-consuming contribution of the veteran. 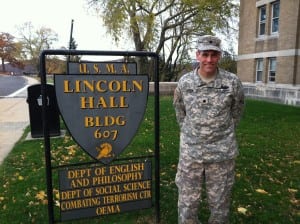 “How does a nation show thanks? How does the average citizen show thanks? I think people are concerned about this. They don’t know exactly what they should do. So it often comes out in this phrase ‘thank you for your service.’ People know the soldiers have done something most are not asked to do. Yet how do you render thanks given the indeterminate nature of the wars? Were they well fought or won? What are you thanking them for? That becomes a sticking point,” said Peter Molin near the start of an interview on how people might begin to understand the experience of today’s veterans.

Lt. Col. Molin is a veteran himself with service in Afghanistan training the Afghan army under battlefield conditions. These days the active duty infantry soldier of 26 years also holds the position of Assistant Professor of Literature at the U.S. Military Academy. When teaching at West Point and active duty military duties permit, Molin also pursues a passion for promoting and celebrating the art (writing, painting, photography, music) produced by contemporary veterans. 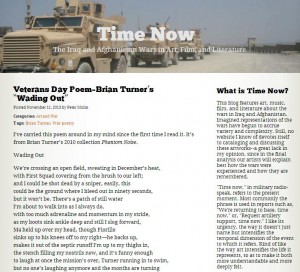 For anyone interested in beginning to understand veterans’ experiences, Molin’s blog Time Now: The Iraq and Afghanistan Wars in Art, Film and Literature is an informative survey of the current modes recent veterans use to express their memories, feelings and perspective. Even a casual scroll through Molin’s presentations provides a rich menu of possibilities for further exploration.

In creating a context for discussing Veterans Day and veterans Molin references a recent Army football game on Veterans Day weekend, which he attended with a student exchange group from Vassar College as part of an initiative to help bridge the civilian-military divide. He saw the occasion as a worthwhile, enjoyable time describing how the president of Vassar and the superintendent of West Point personally greeted the students and cadets. The event also included ceremonial tributes to all veterans.

As a contrast Molin then mentions a 2012 novel, Billy Lynn’s Long Halftime Walk by Ben Fountain, which has its characters at a Dallas Cowboys football game that also includes a similar intent to show appreciation for vets. “The novel offers a scathing satirical commentary by the main character on everyone involved in the team’s operations as well as all the people attending the game. The characters see an America that just wants to celebrate them without being forced to deal with them; it’s a tense, fraught book,” said Molin who considers the work as the best of the current crop of novels about war experience.

Two other 2012 novels Yellow Birds by Kevin Powers and Fobbit by David Abrams are also standouts according to Molin. He observes that many of these new war novels do not contain much actual combat description reflecting the changed nature of the experience. Danger is a constant threat, but the actual violence can come in a moment, from a bomb on the road or a rocket into a military base. 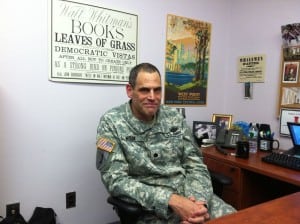 A poem, Wading Out from Brian Turner’s 2010 poetry collection Phantom Noise displays a similar interest in the disconnect between war’s experience and the ordinary American lifestyle.

After describing the landscape and the anxieties of yet another patrol Turner writes:

If one day we find ourselves poolside in California/the day as bright as this one, how will we hose ourselves off/to remove the stench, standing around a barbecue/talking football-how will we do that?

What Turner is plumbing here is the difficulty of going forward, asking how to get to a place where that is not a complicated thing,” said Molin.

“Most of the time, veterans carefully negotiate the terms by which they talk about war, with whom they talk about their experiences, and how they talk about what they have seen and done. On Veterans Day they and the country let their guard down a little. If the public celebrations veer toward an excess of patriotism and gratitude on the side of the citizenry, and of privilege and indulgence on the side of the vets, that’s OK.  It’s way better than doing nothing, wouldn’t you agree, at least for a day?” said Molin.

Asked to elaborate on what might hold veterans of war back from reintegrating themselves into the regular life of the community Molin replied: “It has a lot to do with survivor’s guilt for those who have seen a lot of combat and maybe have seen their buddies die. You feel like your good times, your ability and your right to laugh and enjoy yourself is compromised by the fact that someone else who was close to you cannot.  Maybe you feel complicit or responsible for their deaths. If you’ve been to war you always have that in your mind going forward.”

Molin underscores that the national gratitude as expressed by the government is readily apparent in the form of medical and healthcare and a new GI Bill for education funding. “There’s a lot of good stuff happening out there,” he said. And he includes the many programs at colleges and other institutions that offer veterans opportunities to pursue artistic interests. “There is a great desire by vets to use art to communicate their war experiences. Many see art as the domain of life they want to pursue and they do it with ambition and energy,” said Molin.

Film, photography, painting and music all find their way to Molin’s blog. He mentions the GI Film Festival project, which sponsors and showcases films by and about veterans. The Graffiti of War Project is a program featuring art and sculpture about war by vets.

Molin began the blog a year ago because he did not see anyone compiling art from soldiers. He does not see himself as a critic but rather someone who wants to “get the conversation started and also be in the conversation.” He said the blog has developed a lot of new friendships and has helped him think about the war for himself.

“I am a serving military officer so I am very determined not to be critical of the government or the military or give away strategy. Art allows you to have conversations about things without discussing policy. I want to be loyal to the people I served with. We all worked hard overseas and sacrificed a great deal. The art I talk about might be more cynical or more despairing or radical in its politics. We talk about it in the context of art. These are not my views. I want to create a catalog of the things that are out there. I want to pay homage,” he said.

Molin worries that audiences have not paid sufficient attention to the works out there, even critically acclaimed material such as the novels mentioned earlier or the widely distributed films The Hurt Locker or Zero Dark Thirty. He is looking forward to the upcoming film based on Lone Survivor, by Navy SEAL Marcus Luttrell, which depicts straightforward battle heroics.

As for veterans he expresses a guarded optimism. “I think you’ll see increasing participation by Iraq and Afghanistan veterans on Veterans Day,” Molin said. “They like to come out of their private lives and celebrate among themselves and accept the gratitude of the citizens. For the first two or three years vets are so concerned with their identity. It informs everything they do. In the process of getting on with their lives it comes up less and less.”

One thought on “Every Day is Veterans Day”