Haldane Drama’s fall production this year is Thornton Wilder’s emblematic American classic, Our Town. This is the 75th anniversary of one of the country’s most-produced plays, and it represents a change for Haldane, which has typically presented comedies or lighter dramatic productions. (See related story on the production on page 7.) 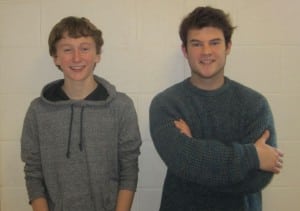 The leading part of the Stage Manager (the character name) is ambitious, with pages of uninterrupted text. The role is daunting even to experienced professional actors. Director Martha Mechalakos, working with a complete double cast (down to the smallest roles) chose two young actors to play the role: Aidan Gallagher, 17, a senior, who will perform Friday night, and Nolan Shea, 15, a sophomore, who performs on Saturday night.

She based her decision on their auditions, and didn’t realize until it was pointed out later that, in an interesting mirror of the play itself, which depicts a small town like this one in many ways, both young men are from local families with multi-generational roots. Philipstown.info/The Paper spoke with the student actors about parallels between stage and real life, their hometown and its fictitious equivalent, Grover’s Corners.

“It’s almost a play about Cold Spring. The audience will see it as an accurate reflection of life here and I think they will really enjoy it.” — Aidan Gallagher

Philipstown.info: How far back do your Philipstown roots go?

Nolan Shea: I think about 400 years — wait, let me text my father. (The correct information: “since before 1870” was relayed later.)

Aidan Gallagher: On my mother’s side of the family I believe it goes back to my great-grandfather — in that vicinity. My father’s family came from Ireland and Austria and I don’t think they have been here as long.

Philipstown.info: Have most family members stayed here, or moved away?

Shea: My dad is one of six brothers. One lives in Beacon, two in Massachusetts, one in Saratoga, and one in Westchester, so they’re spread out. They come back though, because they love it; it’s a great town.

Gallagher: There are a lot of Gallaghers in town; I get made fun of. My dad is the eldest of four and three of them are still here. Most of my mother’s family is in Beacon; we are all very close.

Philipstown.info: Is having a lot of family living so near a good thing, or can it get claustrophobic?

Gallagher: It’s absolutely something I appreciate and I don’t take it for granted. Such a caring group of people who are with you as you grow up affects you in a positive way.

Philipstown.info: In “Our Town” George [the young male character] decides against going away to agricultural college because he can get more from staying home. Do you plan on remaining in this area?

Gallagher: Because I’ve had such a positive upbringing I would want future generations of Gallaghers to have a similar experience. It is pretty important to me that my family continues to live here.

Shea: I’m just a sophomore — I have no idea yet.

Philipstown.info: In the first scenes of the play, the Stage Manager sets the scene of the town: “Up here is Main Street, way back there is the railway station … .” There are references to the churches, Town Hall, the grocery store, the cemetery, and, particularly aptly: “The same names as are around here now.” Does this sound, in many ways, like a contemporary description to you?” 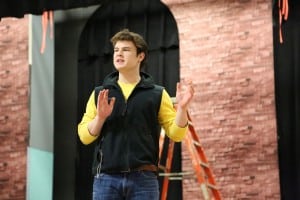 Aidan Gallagher gets into his character at a recent ”Our Town” rehearsal.
Photo by Jim Mechalakos

Gallagher: Yes, completely. It’s amazing how similar it is, from the rows of stores, to the churches found on the smaller streets running off of Main Street. And it’s an expression of how in a small town everybody knows everything about everybody.

Shea: You can’t do anything without everyone knowing.

Philipstown.info: The geographic setting is uncannily similar to Cold Spring as well. As is this description of life here: “We’ve got a lot of pleasures here. We like the sun coming up over the mountain in the morning. We all notice a good deal about the birds. We watch the change of the seasons.” When you describe ‘Grover’s Corners’ are you envisioning this town as you speak?

Shea: In one scene in particular, at the beginning of Act III, I’ve planned out all the mountains I’m describing, viewing them from standing on a hilltop: the range of hills, lakes in front of me.

Gallagher: Most Stage Managers have to fabricate some visual representation of what the town is, but we’re so similar it’s easier to visualize. I see Storm King, Bull Hill, all these different mountains.

Philipstown.info: In the play a cornerstone is placed in a bank being built which will give people a thousand years from now an idea of ‘the way we are now.’ What would you place in one now, for the same purpose?

Gallagher: If Cold Spring were to make a cornerstone for future generations to see what life was like here, it might almost seem necessary to include a scale model of the gazebo, which seems integral to the culture within the village. Or maybe even a painting of a local range of mountains, to reflect on the scenic parts of Cold Spring. It’s things like that – that identify Cold Spring as Cold Spring.

Shea: There are a lot of things I would like to put in the cornerstone but the most important ones are: a piece of the great chain that crossed the Hudson; a cannon ball forged at the foundry; a piece of granite from the quarry at Little Stony Point; a model of the gazebo; a painting of the Hudson River; and finally a picture of everyone in the whole town  – down in the cemetery on Memorial Day.

Philipstown.info: What would you call the “soul” of Cold Spring? Is it a specific location, a time in history, something about the people who choose to live here, some feature of the landscape, or anything else? 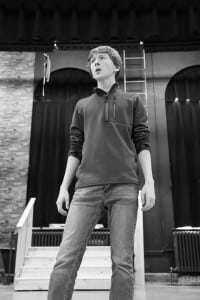 Nolan Shea rehearses for ”Our Town.” (Photo by Jim Mechalakos)

Shea: I feel there is only one answer and that is the Hudson River. If we were to be moved away from the Hudson, Cold Spring would never be anything remotely close to being what it is today. All of the nature around us, the people that visit, and the image of the town would be completely different. The Hudson River is what made this town what it is today.

Gallagher: The soul of Cold Spring, to me, is its generational aspect.  For hundreds of years, the same families have been living here, a lot like how it is in Our Town. And this contributes to the reason why everyone is so close … it’s almost as if we’re a big family, rather than a small village, as cliché as it sounds.

Philipstown.info: What was your reaction upon being cast as the Stage Manager?

Gallagher: At first I was reluctant; it was a cumbersome amount of lines. But I’ve found it’s easier for me to channel this character because it’s so easy for me to relate to him.

Shea: When the casting list was put up I started looking at [the character of] George and followed down from there. I thought ‘I guess I didn’t get a part,’ and then I moved my eyes to the top and couldn’t believe it. I read the play last year in drama so I knew it, but now I’ve read it eight or nine times and it has stuck to me. It was terrifying at first but I’m a lot happier with it now. It’s a lot to learn, but we’re trying to break it up and we’re excited to do it.

Philipstown.info: There is a lot of conjecture about who or what the Stage Manager is; some say he is God, others disagree. What do you think?

Gallagher: It’s universally acknowledged that he is some sort of deity, but he is also a civilian in the town. He’s enlightening the audience as to the daily lives of the people, so in that sense he’s a human being, but he’s all-knowing too. The spectrum is broad because of the two different roles he has.

Philipstown.info: One of the Stage Manager’s lines goes something like: “You’re 21 and you make a few decisions then whisssh, you’re 70 … and that white-haired lady at your side has eaten over 50,000 meals with you. How do such big things begin?”  As 17- and 15-year olds, can you relate to that idea?

Gallagher: Yes. It’s weird, but it’s so true. Time goes by so quickly, and you can easily make rash decisions, which then affect so much of your life.

Shea: You see, through the play, how much can happen in just nine years, and you realize it’s true.

Philipstown.info: How do you think the Haldane High School audience will react to this production?

Gallagher: I can’t even begin to imagine. It has a very solemn atmosphere.

Shea: It does start out funny — and we’ll definitely be playing those scenes out.

Gallagher: I think the high school and the community will respect it.  Maybe it’s not “entertaining” as some of our other shows in a ha-ha kind of way; it’s more of a moral and ethical play.

Shea: It’s kind of a test run to see if we can continue to do stuff like this in the future.

Gallagher: It’s almost a play about Cold Spring. The audience will see it as an accurate reflection of life here and I think they will really enjoy it.

Our Town will be performed at the Haldane auditorium at 7 p.m. on Dec. 6 and 7. Tickets, available at the door, are $12 for adults, and $5 for seniors and students.

One thought on “Their Town”