The Cold Spring waterfront will receive a great deal of attention in 2014. Significant issues remain unresolved ­– including an agreement for the cleanup of toxic coal tar and the impact of that project on the Cold Spring Boat Club. Village trustees will also revisit docking fees and consider policies necessitated by the increased use of the dock in 2013.

Shoreline protection will also be in the news as the village benefits from a grant to design measures to protect Dockside from erosion and flooding – initiatives that will become more urgent in the years ahead if water levels in the Hudson River rise as predicted. Also waiting in the wings is a yet-to-be-determined agreement between the village and the State of New York regarding management of the Dockside property.

It is not yet known if the Cold Spring Boat Club site will be suitable for construction after the DEC cleanup of coal tar.

In October 2013, the New York Department of Environmental Conservation (DEC) agreed to an extensive cleanup of coal tar in the area of the Cold Spring Boat Club after the Village Board rejected a proposal to remove approximately 20 percent of the toxic deposits, a by-product of a manufactured gas plant that operated on the site in the late 19th century. The village has until Jan. 31, 2014 to confirm to DEC that the boat club building will be removed and vacated by Sept. 1, a measure required because coal tar deposits lie directly beneath the structure.

In an email to The Paper, Cold Spring Mayor Ralph Falloon said the status of the agreement with DEC is “questionable” because it is not yet known what state the site will be in after the cleanup, possibly making replacement of the building difficult. “I am optimistic that we will have some type of agreement in writing (through) good faith for both sides,” he said.

The Cold Spring Boat Club was established in 1955 on lands leased from the village, owner of the property. Last fall, the possibility that removing the club’s building would negate the lease was raised; however at an Oct. 26 meeting, Falloon, supported by Village Attorney Mike Liguori, indicated that is not the case. The mayor made it clear that he wants to see the boat club return after the cleanup. “This is not an excuse to do away with the boat club,” he said at that time.

However, the club may not completely mirror its past when the lease is rewritten. Falloon said that the village Comprehensive Plan will be considered as part of the process. That document calls for continued benefits to club members but also recommends greater community access to club facilities and increased revenue generation to benefit the village. The club currently pays no taxes or rent. 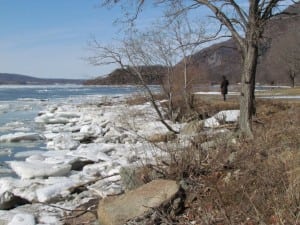 Erosion is already significant at Dockside. Rising water levels will only increase the threat.

Early in 2013, more than 40 residents attended a workshop that examined how climate change is likely to affect the village and what can be done about it. DEC officials highlighted a startling prediction – that Hudson River water levels at Cold Spring will rise by four feet by 2080. Erosion is already an issue at Dockside, the undeveloped parkland north of the bandstand.

In November, DEC announced a grant of $75,000 to design measures to reduce erosion and increase the property’s ability to withstand higher water levels, storm surges and wave action while also improving aquatic habitat. Shoreline management measures will be discussed at a public meeting on Thursday, Jan. 16, at the village fire hall beginning at 7 p.m. Milone & MacBroom Inc. has been hired to design demonstration projects for Dockside that can also serve as a model in similar settings elsewhere.

Fall 2013 saw a surge in dockage at Cold Spring by cruise boats based in New York City and New Jersey. On a number of autumn weekends three boats docked simultaneously, sending hundreds of visitors to Main Street for an afternoon stay. Restaurants and cafes were the biggest winners, often filling to capacity immediately after the boats docked. One cruise line canceled more than 40 cruises out of Cold Spring but may return next year once its boats are properly outfitted to use the dock.

The village plans to review docking fees and policies.

The influx of tourists created no parking problems, but not everyone was enthralled by the boom in foot traffic. Speaking at a Nov. 9 Village Board meeting, Deputy Mayor Bruce Campbell referred to it as a “saturation of tourists” that “swamp the restaurants (and) swamp the waterfront.” A resident complained that the boats interfere with fishing and crabbing from the dock.

“The increased use of the dock by cruise boats showed (its) value and the desire to visit our village,” Falloon told The Paper via email. “I believe we need to better manage … docking to (prevent) overwhelming our village all at once.” He said one solution may be to stagger docking times, adding that there is a need to ensure that people can also simply enjoy the dock.

Bad weather recently forced cancellation of a Village Board meeting at which dockage fees and policies were to be discussed. The issue will undoubtedly be taken up early in the New Year.

The Dockside property, the former site of a popular local restaurant, is now owned by the New York State Office of Parks, Recreation and Historic Preservation. An agreement through which the Village of Cold Spring would manage and potentially develop the site for recreational uses has been pending for several years.

With so many other pressing waterfront issues to be addressed it seems unlikely an agreement will be reached soon, however Falloon is somewhat optimistic. “I would like to come to agreement regarding Dockside in 2014,” he told The Paper, though he indicated he has remaining concerns. “I feel we do all the work to maintain their property … with no resources or help from them.”

It will be a busy year at the waterfront – and at Village Hall.

4 thoughts on “Focus Turns to Riverfront Challenges in 2014”