Key Putnam County government officials began the new year with the same salaries as in 2013, with a few notable exceptions – such as the two election commissioners whose pay apparently leapt by more than 12 percent – comparisons of the salary rosters for 2013 and 2014 reveal.

Typically, the Putnam County Legislature sets the salaries for the oncoming year at its prior-year final meeting. Thus it finalized the 2013 salaries at a year-end session in December 2012 and fixed the 2014 salaries on Dec. 20, 2013. 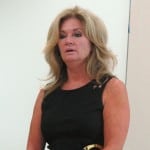 Putnam County Executive MaryEllen Odell, shown at a meeting in Carmel last August, is drawing the same pay for 2014 as in 2013. Photo by L.S. Armstrong

In unanimous votes the legislature, including Philipstown’s representative Barbara Scuccimarra, made the 2014 salary for its members $35,136, as in 2013. Likewise, it kept the pay of County Executive MaryEllen Odell at $148,635. However, the legislators voted to pay the two election commissioners $71,477 each. Minutes of the 2012-end-of-the-year meeting show that the legislature set the election commissioners’ 2013 pay at $63,477, $8,000 less. Recipients of the higher pay are long-time Republican Commissioner Anthony Scannapieco and new Democratic Commissioner Catherine Croft, the replacement for Robert Bennett, who held the office for years before retiring last month. Each party has one commissioner.

Under New York State law, the salaries for Odell and the elected commissioners take effect 45 days after their adoption unless challenged by a permissive referendum (launched by a voter petition).

Further line-by-line salary comparison shows that the legislature set the 2013 pay of District Attorney Adam Levy at $158,933. For 2014, the legislature voted to give the district attorney $165,657. Whether Levy hangs onto his job this year remains unclear, given his embroilment in investigations over rape allegations involving a friend and questions of his own conduct in various capacities.

The salary of the county clerk, Dennis Sant, who generated national controversy last year for his refusal to divulge public records with gun-ownership details, will get $119,494 for 2014, as in 2013.

Recently re-elected Sheriff Donald Smith and Commissioner of Finance William Carlin also are drawing the same pay in 2014 as they did in 2013: $137,273 for Smith and $131,263 for Carlin. And the salary of Fred Pena, the commissioner of highways and facilities, stays at $121,000.

Philipstown resident Vincent Tamagna also will draw the same amount, $75,000, in 2014 as in 2013 for serving as county transportation program manager (called the operations manager in the 2013 salary schedule). The salary of another local resident, Libby Pataki, director of the Putnam County Tourism Office, does not appear in the pay roster; her agency is sometimes considered a quasi-governmental entity.