The public may soon get more parking alongside park land.

The Philipstown Zoning Board of Appeals Monday night (Jan. 13) approved subdivision of the approximately 30-acre Winter Hill estate to allow 9.2 acres to be donated to the State of New York.

Adjacent to state property and located just off Snake Hill Road, close to Route 9D, the sliced-off parcel is big enough for the state to build a parking lot for vehicles of hikers headed uphill to Revolutionary War military redoubts.

The ZBA made its approval contingent upon the gift of the parcel to the state. Specifically, the board voted 5-0 to grant a variance, needed because under town zoning subdivided parcels are supposed to be 20 acres in size. 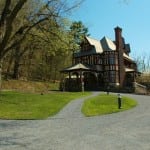 At a public hearing preceding the ZBA vote, no one in the sparse audience commented and the hearing closed. ZBA members, too, said little, beyond posing a few questions, including one about the motives of the Winter Hill owner, Christopher Buck.

Representing Buck, Glennon Watson, of Badey & Watson Surveying & Engineering P.C., dismissed suggestions that Buck seeks to reduce the amount of land he owns subject to property taxes. “That’s not the purpose” of the donation. “The purpose really is to create a parking area. This is a very altruistic thing he’s doing here,” Watson said.

Watson and Buck said the state has been interested in providing parking to keep cars from using the edge of narrow roads, like Snake Hill or Avery.

ZBA Chairman Robert Dee observed that a defined parking area “would get people off the street,” a safety concern.

Buck and Watson also said that because New York State pays a form of tax on its park land, the parcel would not be going off the tax rolls.

Overall, the conveyance “is beneficial to the community,” ZBA member Paula Clair said before the vote.

According to the pamphlet 22 Hikes in Philipstown, history suffuses the redoubts, reachable by trails from Snake Hill Road. From 1779-83, Continental Army troops occupied the North Redoubt. Now a state historic site, the redoubt included artillery battery fortifications still partly visible. Hikers can now use an old redoubt cannon road as part of the trail system.

Gen. George Washington reportedly was inspecting the South Redoubt when Benedict Arnold, on the verge of being caught for treason, fled down a nearby path to the Hudson River and escaped.

Those who make the trek up the ridge to the redoubts find “sweeping Hudson River vistas from summit ruins of two Revolutionary War forts,” promises 22 Hikes in Philipstown.

Buck offered a similar opinion. “It’s a beautiful hike up there,” he said.