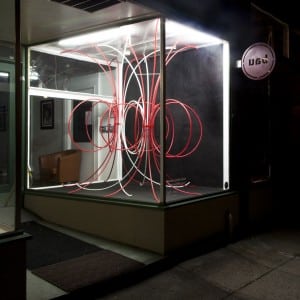 Sculpture by David Provan, a new installation for the window of bau Gallery, is on view in Beacon and will remain in place until Feb. 2. The new work, This Brief Moment x 2, is constructed of welded steel and PEX tubing, a type of polyethylene tubing commonly used in plumbing. This is Provan’s second use of this unorthodox material as a sculptural medium: the first was in The Geometry of Light, a monumental piece that was shown in the Collaborative Concepts Saunder’s Farm Project 2013 and resembled a pair of fountains, 13-feet-high, erupting in white sprays of PEX tubes that swayed in the breeze.

This Brief Moment x 2 merges two of Provan’s career-long themes: the Interaction of Opposites series and the Life Path series. In this instance, each vortex shape models a surge of energy composed of discrete elements. The trajectory of these elements, moving from the outer perimeter into the heart of the vortex, merges into an identity, which then disperses, tracing an arc from birth to death or development to destruction. When these two (red) vortices come within proximity of one another, they spawn a third (white) event.

Provan grew up in Silicon Valley. After four years in the Navy, he worked and studied in Japan, India, Nepal and London. In 1979 he received a B.A. from Yale University and, later, his M.A. from the Royal College of Art. A former Buddhist monk, he has incorporated elements of Eastern philosophy into his sculpture from the beginning. bau Gallery is located at 506 Main St., Beacon.