Help is on the way for Dockside’s ailing shoreline. Once the site of a popular riverfront restaurant in Cold Spring, the property’s shoreline is eroding significantly due to wave action from the Hudson River, the destructive force of storms and rising water levels. On Thursday (Jan. 16) local residents met with a team from Milone & MacBroom, Inc., Hudson & Pacific Designs and EarthRise Designs at the Cold Spring fire hall – part of the early stages of a project to design measures to combat erosion at Dockside that can also serve as a model to waterfront communities throughout the Hudson River estuary.

The design work is being funded by a $75,000 grant from the New York State Department of Environmental Conservation (DEC) and the Hudson River Estuary Program in partnership with the New England Interstate Water Pollution Control Commission. 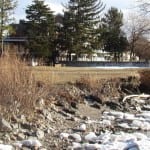 According to Dan Miller, DEC’s Project Manager for Dockside, the initiative will not actually construct protective measures at Dockside. Instead, shore protection strategies tailored specifically to conditions at Dockside will be designed; the result being a “shovel ready” project that can be carried out once additional funding is secured. David Murphy, a consultant with Milone & MacBroom said he expects designs to be complete by November.

Tropical Storm Irene and Superstorm Sandy battered Dockside in recent years and Murphy reminded the audience of about 25 residents that such events won’t be the last of the severe weather. “Storms will occur – whether you believe they are happening more frequently or not.”

He also said that rising sea levels would result in higher flood levels at Dockside. While the erosion control measures being designed won’t prevent flooding, Murphy said that the project aims to “design a resilient, sustainable shoreline that resists erosion, provides  (wildlife) habitat … and is compatible with future park use.”

The presentation included aerial photos of Dockside illustrating how the projected rise in sea levels will affect the site through the 2020s, 2050s and 2080s. Photos of shoreline protection projects implemented in other parts of New York including Coxsackie, Esopus and Cooperstown – and containing design elements likely to be included at Dockside – were also shown.

Key aspects of those designs include the use of rip-rap, loose stone of varying sizes, combined with vegetation – both of which help fight erosion while also benefitting fish and wildlife habitat. One fact that came out in the early stages of research that surprised even the consultants is that the shoreline at Dockside contains at least 24 non‐native and 18 invasive vegetative species. 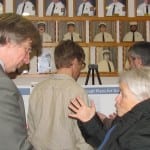 Dockside as a sloop port?

Much of the meeting was devoted to answering residents’ questions while also collecting their ideas on numerous subjects relating to the project. Facilitator Don Watson referred to it as a “Yes session” – meaning that information would be gathered but no evaluation of suggestions would be made that evening.

Garrison resident Sandy Saunders, always a colorful figure at public meetings, said that historically, Dockside had served as a sloop port and that it should be restored to that use. He suggested that boats such as The Clearwater should be able to dock and take on repairs there and that a “Clearwater 2” be built on the site. Residents living between the river and the railroad tracks concerned about possible impacts on flooding were assured that shoreline measures designed for Dockside would have no adverse effects on adjacent properties. Watson explained that a “living shoreline” such as the one to be designed for Dockside, diffuses wave action and tends to absorb water.

“It may make things a little better – and certainly no worse” with regard to flooding, he said. He also pointed out that the current high water mark would be used in the design of protective works – not the pre-Hurricane Sandy shoreline.

Murphy said that previous concept plans for Dockside will be taken into account in the design of shoreline protection measures, including such things as a boat ramp for the Building Bridges Building Boats program and “toe-in-water” access to the river, items that both support enhanced public use of the property – a key goal of the project.

Considering the riverfront as a whole

Anne Impellizzeri, a member of the Cold Spring Planning Board and the Special Board for the Local Waterfront Revitalization Plan, said there is a need to consider the Dockside project within the context of the entire village riverfront. She questioned if kayaking facilities would be appropriate at Dockside, given that Foundry Dock already provides that type of river access.

“How much (kayak access) is needed?” she asked. She also pointed out that the recent increase in use of the main dock by cruise boats creates conflict with recreational users and she wondered if Dockside might be suitable for crabbing and fishing. The possibility of creating jetties off Dockside that could gather sand and create beaches was also raised. Other topics included everything from water quality issues and the need for signage to use of the site for outdoor films and the need to consider the many ideas put forward at meetings in the past.

When asked what is unique about Dockside, Murphy said, “To have a park of that size, with that view, is precious. So many communities don’t have that.” He said that for the type of shoreline found there, the cost of erosion control measures would likely be in the $500,000 to $1 million range. Dockside is owned by the New York State Department of Parks, Recreation and Historic Preservation and is part of the Hudson Highlands State Park Preserve. An agreement is pending between the Village of Cold Spring and the state under which the village would assume management of the property.