Galef, whose district in the lower chamber of the New York State Legislature includes Philipstown, hosted a public forum at the Butterfield Library in Cold Spring. The two-hour event drew about 15 hardy participants, including a critic who occupied a corner chair and said nothing but displayed a sign reading “resign Galef: 35 years of BAD government.” 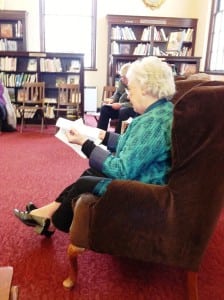 Assemblywoman Sandy Galef goes through her notes at the forum.

The assemblywoman presented highlights of initiatives pending in Albany, including the push by fellow Democrat Gov. Andrew Cuomo for consolidation of local governments and governmental districts.

Galef explained that Cuomo proposes to keep local property taxes at the current level for two years if municipal and school district tax increases do not exceed the state’s 2 percent cap the first year and if in the second year along with compliance with the cap such jurisdictions begin to consolidate operations or share services. “He’s trying to freeze your property taxes,” Galef said of Cuomo.

School districts could streamline by no longer handling such tasks as purchasing and payrolls individually and instead cede authority to their BOCES (regional Board of Cooperative Educational Services), Galef suggested.

Mary Boyle, a teacher in Peekskill, attacked limits on tax hikes. “The tax caps are killing the schools. You’re bleeding the schools dry,” at a time of increasing student need, said Boyle. “There’s a lot of unfunded mandates” and expenses that must be borne. “That’s not the fault of a teachers’ union. That’s a fault of Wall Street” refusing to pay its fair tax share and of unscrupulous or illegal practices in the financial sector, Boyle alleged. “Those guys should have went to jail,” she argued. 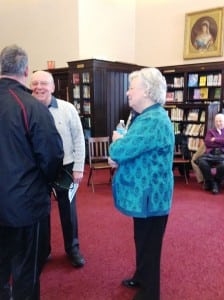 Assemblywoman Sandy Galef chats with constituents at the Jan. 25 forum.

Other attendees likewise called for tougher regulation of the financial sector, including stronger laws and penalties for those engaging in fraud and other misconduct. “Put them in jail,” one man urged, noting, however that “the judge can only put people in jail if the law says they go to jail.”

Galef promised to check to see what relevant regulatory proposals might be pending in Albany.

Another audience suggestion involved state limits on the number of administrators a small school district can employ. “Here at Haldane for 800 students” there are multiple principals, plus a superintendent and other officials, a constituent told Galef. “For a small district, this seems particularly top-heavy.”

As the state takes up the budget this year, Galef said, “there’s going to be a lot of maneuvering among people that want different things,” with a “tug of war going on between these different school districts” over allocation of education aid. “You never get what you want [totally]. It’s all a balance,” she observed. “All of it has a ripple effect, whatever we do.”

Galef urged residents worried about fracking, a controversial method of extracting fuel from underground rock formations, to continue informing Cuomo of their opposition, before the state adopts a policy. After seeing the problems attributed to fracking in other states, “I think it’s good we waited,” she said.

District 1 Putnam County Legislator Barbara Scuccimarra raised the issue of possible use in New York of fracking wastewater in road-surface treatments. “I think anything that could threaten our water supply — you can’t let it happen,” she said. “It [water] is just too precious.”

Fracking waste “does eventually wind up in the drinking water” if used on roads, said Dr. Peter Bach, a veterinarian who practices in Cold Spring.

Galef predicted that New York would soon legalize medical use of marijuana, regarded as a helpful tool in cancer treatment, but “I don’t think there’s anything [planned] about legalizing marijuana generally.”

“We have to be very cautious,” Scuccimarra said. She described marijuana as “a gateway drug” — one often leading to use of other illicit drugs and drug abuse.

Bach warned that marijuana remains potent in the human body about three times as long as alcohol.  “If we’re going to lower the threshold of marijuana, I think we need to inform people of what we’re getting into,” he said. For one thing, Bach said, “we have enough traffic deaths already” from accidents involving substance abuse. “I don’t think we should tolerate any more.”