It takes but little effort to come across great historical events and figures in Philipstown. We’re fortunate to live in an area rich with people who did extraordinary things and had an influence on the current landscape. James F. Brown was one of those figures, playing a role in the growing horticultural movement in America in the 1800s and escaping slavery to become an artisan, homeowner and voter. During the era of “gentlemen farmers” when leaders like Thomas Jefferson were experimenting and adding science to gardening and farming, Brown’s story stands out because he was a free black man who became the master gardener for one of our area’s largest and most significant estates.

Visit Mount Gulian in Fishkill to learn about the nearly 300-year history of the Verplanck family on an estate that once covered 85,000 acres in what is now known as Fishkill and Beacon. Brown started working for the family as a coachman and rose to be in charge of their fields, gardens and crops, managing the staff and overseeing all the operations. A crowd at the Putnam History Museum on Saturday, Feb. 22, gathered to hear Myra B. Young Armstead read from her book about Brown, Freedom’s Gardener, James F. Brown, Horticulture, and the Hudson Valley in Antebellum America. She spent nine years researching and writing the book. 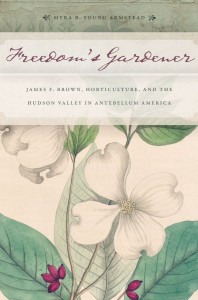 Armstead, a professor of History at Bard College who has written two previous books about the Antebellum period and black life in the Hudson Valley, came across Brown’s diary by chance on a tour of Mount Gulian. The diary is a remarkable record of Brown’s life spanning nearly 40 years from 1829 to 1866. It chronicles his life from the time when he was a slave through his escape, then his emancipation and life as a free man. Brown ran away from his slave owner after the event passed when he was promised emancipation. The man who owned him left a will stating that Brown was to be freed upon his death, but his wife didn’t honor that.

Brown, who was literate in spite of his enslavement, left letters and other notations in his diary about his decision to leave. Armstead read from the book: “In February of each year, he hauled dung for fertilizer to ready the fields for spring planting. He purchased the finest seed from Parmentier’s in Brooklyn and Thornburn’s in Manhattan. He taught himself to grow Swedish turnips and award-winning celery, savoy cabbages and gooseberries.”

When he made it to New York, he was employed by the Verplanck family first as a coachman and finally as their master gardener. They helped him buy his freedom once and for all when his former owner discovered his whereabouts. Armstead read a passage at the museum about Brown traveling to a garden show in Philadelphia. She made his life come alive by filling in the details of what his life would have been like based on her own research. The story would be enjoyable to anyone wanting to understand black life in America and the role of someone involved in the fascinating history of the horticultural movement in America.

For further reading about the subject, “A Rich Spot of Earth” Thomas Jefferson’s Revolutionary Garden at Monticello by Peter J. Hatch, the Director of Gardens and Grounds at Monticello since 1977, was the winner of a 2013 American Horticultural Society Book Award. The description from the publisher, Yale Press, describes it as a book full of color photos of Monticello showing the range of plants and crops that have been restored to their historical record.

Andrea Wulf’s book, The Founding Gardeners: The Revolutionary Generation, Nature, and the Shaping of the American Nation also focuses on the history of horticulture in America. According to Knopf, the publisher, the book details how the leaders who shaped America’s history, George Washington, Thomas Jefferson, James Madison, and John Adams, among others, also were dedicated to horticulture on their estates and those values are shown in their impact. The history of gardening encompasses social, cultural and political movements that are fascinating to read.