The Philipstown Town Board last week heard tales of costly cleanups involving snow and ice on town roads and dog droppings at a town park — a problem seemingly as persistent as winter storms or summer heat.

In its formal monthly meeting Thursday night (March 6), the board also moved toward getting a generator at the recycling center for the emergency responder radio antenna there, to keep communications going during a crisis.

A written monthly update by Highway Superintendent Roger Chirico revealed that the latest storm, with “its generous snow accumulation and ice build-up,” alone cost the town $86,955. He broke that total down into $41,828.46 for sand and salt for road surfaces, $25,136.96 in employee overtime, and $19,990 for hiring outside contractors to help, a rare necessity. In summation, Chirico wrote, in a report read by Councilor John Van Tassel: “The storms this year have been running on an average of $30,000 per storm, which is normal.”

Chirico likewise advised that water run-off creates havoc. “I cannot emphasize enough how dangerous this situation can be especially this time of year where it can turn to ice,” he stated. “There have been times where the department had to go out early in the morning and sand the road in the area where the run-off has turned into ice.” The superintendent warned that property owners must deal with water flow. Letting it get onto someone else’s land or “the town roads is illegal” as well as a town financial burden, he said.

He said his department is “filling potholes and beginning to grade the roads back to pre-storm condition. We know the conditions of the roads are not optimal and your patience is appreciated,” he said.

Pothole repair practices drew a question from audience member Robert Juby, a resident of East Mountain Road South, who said highway crews typically fill potholes with crushed stone and rocks in warmer weather. “If it were muddy, they’d do that and it would knit into the road.” But now “it’s frozen solid,” he said. “It’s not knitting; it can’t. I don’t understand.”

Councilor Nancy Montgomery said she and Chirico had surveyed Lane Gate Road, which had similar potholes to fill. “As he explained it, if he hadn’t done that, come a month from now it would be mud,” she said. She pledged to check with Chirico about the department’s methods.

Juby observed that if Chirico “waited and it got muddy, people would be up here complaining that it was all so muddy.” He praised the town’s efforts overall: “The roads are really in pretty good shape. It’s amazing, considering what it’s been like.” 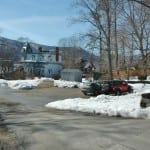 A report from Butterfield Library contained more snow woe. Although not a town department, the library gets tax money channeled through the town budget and sends regular reports. In the latest, read by Montgomery, Library Director Gillian Thorpe noted that “ice and snow removal caused major issues with the library’s parking lot,” which the library “closed to the public, as we could not keep it free of ice for a few days. Unfortunately, people removed our caution tape and used the lot anyway,” Thorpe wrote. “The library would like to ask the public to please respect our signs… .”

Thorpe’s report also informed the Town Board of a gift, a $20,000 annuity, from Arthur and Andrea Gruber to honor Arthur’s mother, Rita Greenberg, and support the library technology budget.

In another bit of financial good news, Montgomery reported a $50,000 municipal facilities grant for the planned pavilion at the town park on Route 9D, Garrison. She said the town obtained it through the work of Recreation-and-Parks Director Amber Stickle and Claudio Marzollo, a Recreation Commission member, with help at the state level from Assemblywoman Sandy Galef.

The situation at a second park, at Quarry Pond, off of Route 9 in the northern end of town, also drew the board’s attention. Montgomery and Van Tassel said dog owners often allow their pets to defecate but do not clean up the mess afterward and also let their dogs run loose. Montgomery said signs will be installed reminding owners “to please clean up after their dogs. It’s a huge problem,” she said. “We’re getting lots of complaints from the public. This was supposed to be a passive park” with no or minimal expenses. “Now we find it’s costing us a lot of time and money to maintain.” She also pointed out that letting dogs run unleashed “is against the law” and urged the public to call the Putnam County Sheriff’s Department when it occurs.

“It’s unsafe, with the dogs running loose,” Van Tassel agreed. “It’s really upsetting. We need to take better care of the park.” The Town Board has been wrestling with dog-related problems at the park since at least mid-2011.

Supervisor Richard Shea told his colleagues that Cold Spring Fire Company No. 1, which serves Cold Spring, Nelsonville, and parts of Philipstown, wants a generator to guarantee non-interrupted radio communication via the antenna at the town recycling center. He recommended “just getting it done and then seeing how we’re going to pay for it.”

According to board members, the antenna serves town emergency responder and preparedness activities, the highway department, and other crucial operations. Shea said the generator would ensure that radio communication “when we need it the most” if power to the area goes down in a disaster.

The other board members concurred, though they took no vote. On Montgomery’s suggestion, Putnam County District 1 Legislator Barbara Scuccimarra promised to seek possible Putnam County assistance with the project.