Backs Butterfield government center if county can own its space

After five years as a Putnam Valley Town Board member and almost 18 as District 2 representative in the Putnam County Legislature, educator Sam Oliverio has set his sights on another office: Putnam County executive.

To win it in November’s general election, Oliverio, the lone Democrat on the county legislature, must defeat the Republican choice — expected to be incumbent MaryEllen Odell, if no one brings a successful GOP primary challenge to her. 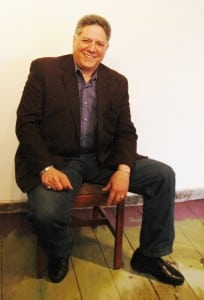 During a wide-ranging interview with Philipstown.info / The Paper on Wednesday (March 26), Oliverio discussed his reasons for running and commented on several issues, including creation of a senior citizen center and county offices in a redeveloped Butterfield Hospital complex.

Aside from being a legislator, Oliverio is assistant principal at Putnam Valley High School and previously served in that capacity at the Putnam Valley Middle School. Before that, he was a guidance counselor. A 1971 graduate of Lakeland High School, he spent three years as a military police investigator with the U.S. Army and earned an undergraduate degree in education from New Paltz State University (State University of New York at New Paltz) and a master’s degree in guidance from Oneonta State.

Oliverio said that he has seen an unhappy change in county leadership under Odell. “In the past two years, I’ve found our county government kowtowing and answering to outside forces,” whom he described as “those who are politically connected or big-business interests. The moms and dads, the grandmas and grandpas,” and the middle class, Oliverio said, “have been left out. And it’s time we gave Putnam back to the people. That’s whom we should be listening to, not anyone else. As an experienced, focused legislator, I truly believe I can bring Putnam back to the glory it had prior to these outside forces taking over. I will represent the individuals who make up the county.”

Butterfield and a senior center

Oliverio favors putting a county-sponsored senior citizen center and branches of county offices, such as the Department of Motor Vehicles, Sheriff’s Department, social services, and Office for the Aging, at a redeveloped Butterfield Hospital site. However, he does not want such facilities there if the county must lease the space for more than a couple of years, instead of owning it directly.

“I’m in favor of doing a senior center in Butterfield, but I will not agree to it if it’s strictly a rental deal,” he said. “I want a lease with option to buy. I’ve always strongly believed that governmental buildings need to be owned by the government, not rented. I want to be able to buy the space we occupy. If that can’t be done, I will be a ‘no’ vote” in the county legislature, assuming the question arises before his term ends. (Because of term limits, he must leave the legislature at the end of the year.)

Oliverio likewise backs county sharing of sales tax revenue with the municipalities in which it is raised, but, again, with a caveat: He would share the excess sales tax — the amount above the figure predicted for sales tax income in the yearly county budget. (He did not explain what might happen to sharing in a year when county budget-setters estimate exactly what tax subsequently comes in and no excess accrues.)

“I’ve been a big proponent of sharing sales tax,” Oliverio said. “That’s something I will pursue … not so much sharing the actual sales tax we estimate the county to get, but the excess sales tax.” In recent years, the county ended up with $2 million or $3 million more in sales tax revenue than it expected, he said. “That’s the money I would share. It doesn’t affect the county’s budget.” He said he sponsored a sales-tax-sharing proposal but “unfortunately, the administration urged some of my peers not to support it” and it failed.

He suggested Main Street might benefit from a sharing program. “Philipstown has a great row of businesses here” in Cold Spring, he said. “It’s a big tourist attraction. It provides so much sales tax for the county. And yet we do not support Philipstown in their infrastructure, their maintenance” for that tourism, Oliverio said. He foresees sharing sales tax in a way that reflects the amount generated in each community — a method by which, as he acknowledged, Carmel and the Town of Southeast would get substantially more than Philipstown.

Oliverio was uncertain whether the county should appeal the decision in a legal case it lost when it attempted to maintain the secrecy of licensed handgun owners who did not choose to keep their names off the public record. As someone who enjoys target shooting, “I am a strong proponent of Second Amendment rights,” he said. “Now, do we continue to fight a lawsuit to protect those individuals who did not make use of the opportunity to have their names held [confidentially]? Should they continue to have their names shielded? This continued appeal is going to cost a lot of taxpayer dollars,” he said. “But at the same time I want to defend the rights of individuals who under the Second Amendment want to protect their identity in owning a handgun. So I am torn. I can see both sides of the issue.”

Oliverio noted that he began his career in elected office as a Republican, only to diverge from the GOP when he objected to disbanding the Putnam Valley police force. Since then “I’ve been very pleased to be a Democrat,” he said. “The Republicans always, always pressure their people, whether the issue was right or wrong, to follow the party line. I’ve never had that from our Democratic Party in this county,” even when he and party officials disagree. Thus, he went on, he has never been warned to acquiesce or face an internal party challenge in a primary election. “Yet the Republicans do that all the time to good people,” he said. “If you don’t follow the dictates of the Republican dogma, you get ‘primaried.’”

Oliverio said that if he becomes county executive, he anticipates no real problems in working with the Republican-controlled county legislature. He cited his successes in the legislature in spearheading opposition to use of “fracking” by-products on county roads; demanding a wider evacuation-safety zone around the Indian Point nuclear power plant — and overriding an Odell veto; and advocating that Putnam outlaw smoking in indoor places, making it the leader among counties in the state.

“I’ve worked for 18 years as a minority” in the legislature and introduced many initiatives, he said. “Almost every single one has been approved. Whether an individual is a Republican or Democrat, they’re human beings. And when you can lay out the issues and show the good, and the correctness of your point of view, good people with good intentions will agree with you, regardless of their political affiliation.”