The Philipstown Food Pantry received a $1,900 boost this week when Fr. Shane Scott-Hamblen and Gordon Stewart, publisher of The Paper, presented the pantry’s volunteer coordinator Andrea Bach with a check. The funds arose from part of the ticket sales of the Dec. 22 performance of The Messiah at St. Mary’s Episcopal Church where Scott-Hamblen is pastor. Stewart organized and conducted the George Frideric Handel work, which had two performances. 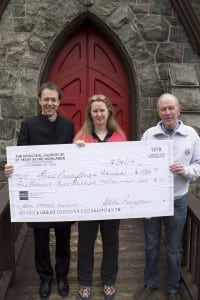 Bach expressed her appreciation for the funds on behalf of the food pantry’s clients and underscored that the funds were especially welcome given the coming Easter season when the pantry makes a special effort to provide a little something extra to families to help mark the occasion. She mentioned the possibility of purchasing trays of fruits and vegetables to augment donated hams for an Easter meal.

“It’s important that for the big holidays the family can sit down and enjoy a wonderful meal together,” said Bach.  The food pantry is operated under the auspices of the First Presbyterian Church in Cold Spring.

The food pantry only serves citizens of Philipstown who are required to demonstrate residency. On occasion someone will show up from another jurisdiction. Bach said she never turns anyone away if it is their first time, but she is obligated under state rules to direct them to the services in their home area.

Bach said the pantry currently assists approximately 25 to 30 households involving well over 100 people. She said there were eight to 10 households when she started a few years ago. The pantry supplies three days worth of food for the week including breakfast, lunch and dinner.

The numbers are going up both in terms of households and people particularly over the last year or two according to Bach. She attributed this to both the state of the overall economy as well as the fraying of the social safety net wherein support payments such as food stamps and Social Security don’t keep pace with the needs of some people. She said senior citizens account for the latest increase in clients. “Its particularly hard for them to come to the food pantry because they have been working hard all their lives, they’ve put into Social Security and now they don’t get enough to get through the month and buy food.”

The food pantry is in part funded by a state grant that accounts for about half a year’s needs. “It’s a very important thing to get private money donations or food donations,” said Bach. But she stressed that monetary donations can go much further because of the pantry’s eligibility to purchase foodstuffs at even less than wholesale prices. “While you may buy a can of beans for 98 cents, I can buy four cans of beans for 98 cents,” she said.

“All the churches contribute to this,” said Scott-Hamblen, commenting on the donation, which he attributed to Stewart’s work. “It’s a joint outreach rather than each of us having our own pantry.”

“And it’s not just donations, we also have volunteers from all the communities of faith here,” added Bach.

Monetary contributions to the Philipstown Food Pantry can be mailed to the First Presbyterian Church, 10 Academy St., Cold Spring.