“This has always been our little idea. We always had a plan for this place.”

These sentences, spoken by Lydia McMahon, the new co-owner of the Garrison Café, by default hub of the hamlet of Garrison, are true, but the plan she referred to took a few twists and turns along the way in coming to fruition.

The McMahons, who have lived here for 15 years, originally desired to start an online wine business. Licensing regulations required a storefront of some kind to go along with it. After scoping out nearby spots, they started talking to Pascal Graff, the café’s then-owner about partnering in a European-style “enoteca” model, in which they would take over the shop across the road, and their wines would complement his food. After back-and-forthing the “will you be our food component?” for months, they were ready to make the jump and told Graff, “You’re a part of our marketing plan.” 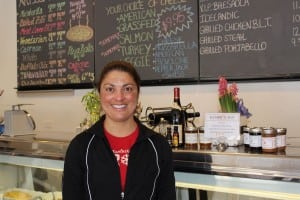 “You’re killing me,” Graff responded. “I think you really want this — and if you do, I’ll sell the café to you.” Despite having no background in the hospitality industry (Matt works with his family’s medical publishing business in New York City. Lydia, who met Matt when she went to work for his father’s firm — “I graduated from Sarah Lawrence and wound up working for this quirky family, and ended up marrying into it.” — has a background in advertising sales.), they decided that the time was right to dive in, and they did — quickly.

“The fact that Pascal had put so much work into it, resurrected it and made it a viable business gave us the confidence to do this,” Lydia says.

As of now, the café looks much as it did previously. For those worried that the wood-fired pizza oven would become history, it will not — in fact a Nutella pizza is a future food rumor Lydia has started herself. For those with a croissant passion, rest assured, the baked goods will remain. In fact, “Pascal left us his people,” says Lydia, so there is continuity to the already-popular foods offered. Patrons will still find breakfast specialties like French toast and eggs Benedict and, for lunch, a variety of paninis, including a grilled portobello and a Cubano chicken, along with an assortment of ready-made sandwiches, which can be both heated and customized. “Just ask,” says Lydia.

Someone requested a kale Caesar salad, now featured on the menu. Egg white omelettes? Easily done. If something runs out, “I live two minutes away,” says Lydia, “and I can, and do, run home to get it.” An amuse-bouche is offered each morning and new, homemade, homegrown items in stock include cupcakes by Garrison’s Andrea Rouxel, and gluten-free baked goods by Karen Thompson of the Desmond-Fish Library. There is also a new staff member, café manager Antonio Avellaneda, who formerly worked at the Highlands Country Club. 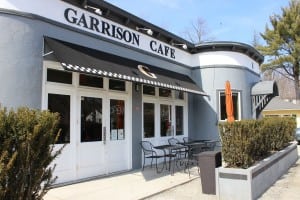 Eventually, the McMahons, who are currently obtaining a liquor license for wine and beer, hope to expand. She is eyeing the notion of serving “pop-up dinners” which she is calling the ‘Hudson Highlands Tasting Table,’ with guest chefs, a theme, and a set price with “no bill at the end of the night.” In keeping with their lives as a couple with young children (they have an 11-year-old and four-year-old twins and are very active in many family activities, Matt serving as a Pop Warner football coach and Lydia winding down a two-year term as the Garrison School PTA vice president), they are planning to add a play space behind the café, and have already added highchairs and a published kids’ menu.

“It will slowly take time to revamp things, but we’re already on our way, less than two weeks in,” Lydia says. They want to mix it up a bit, offering both gourmet burgers and ‘regular’ burgers. “If you know us as a family, that’s us: Budweiser and fine wine,” Lydia says with a broad smile.

With just a short time at the helm behind her, Lydia says she has already “learned a lot. My God — we go through a lot of food! The volume is unbelievable. We keep placing orders for more. We get the commuters, the hikers, everyone — and we keep hearing that the summer is just insane.” What Lydia is finding most of all is that “Everyone wants this place to succeed. We get a lot of advice, but all of it is positive — there’s such good energy.”

One thought on “Order Up: New Owners, New Ideas at Garrison Café”