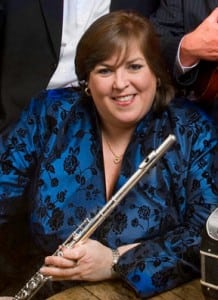 The Franciscan Sisters of the Atonement announced that their 11th Annual Benefit Concert will feature Joanie Madden and Her All Star Band. Madden, a Grammy Award-winning Irish whistle and flute player and the youngest member inducted into the Irish-American Musicians Hall of Fame, has performed on over 100 albums with musicians such as Pete Seeger and Sinead O’Connor. The Bronx native was also a featured soloist on the final Lord of the Rings soundtrack.

This lively benefit concert will take place at 3 p.m. on Sunday, April 27, at the Paramount Hudson Valley, 1008 Brown St, Peekskill.

General admission seats are $25. Proceeds from ticket sales will be used for the Sisters’ Ministries and for the care of their senior Sisters. Tickets are on sale at the Sisters’ Gift Shop at Graymoor, 41 Old Highland Turnpike, Garrison. Call 845-230-8337.