Some parents attended with children. A couple of rows were filled with staff in matching blue Haldane Faculty Association T-shirts. Community members came to get a better understanding, some with children who had attended Haldane and others who just care about art and the school. The standing-room-only crowd who packed the Haldane music room on Tuesday (May 6) shared a common purpose, though, to gather more information about the district budget that is up for a vote on May 20 and will be the first time the budget has been balanced with a reduction of teaching positions.

On one point, everyone agreed: New York legislators have put the district and other schools across New York into this position. Interim Superintendent John Chambers described it as a “perfect storm” including $350,000 in revenue the state has withheld, expenditures that are mandated like the Teacher’s Retirement System, and the state-imposed tax levy cap that holds Haldane to a 1.09 percent increase for the 2014-15 school year. If voters approved a higher amount, district property owners would lose their tax rebates from the state and the Board of Education has ruled that out as a possibility. 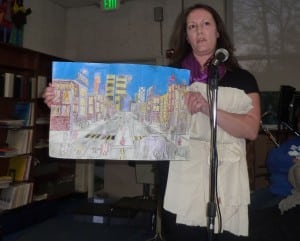 During a plea to the board to maintain the program, Haldane parent Cindy Chiera displays artwork her son made at school.

The meeting was solemn and emotional; the dozen people who spoke out expressed anger, sadness and personal arguments they hoped would sway the board. As was detailed at the April 22 board meeting when the budget was adopted, staff cuts were to be made and those reductions were revealed.

In addition to several other cost-saving measures that have been discussed over the past two months (more information on the district’s website), an art teaching position will be cut back from full-time to part-time which eliminates elective art classes, two full-time teaching assistants will be laid off, the assistant cross-country track coach position will be eliminated and sports teams will be cut for middle school students, including boys basketball, girls basketball, girls volleyball and cross-country.

High school Principal Brian Alm said, “We’ll still have studio art, the fundamental entry level that we’re mandated to offer. This is a shared position between the high school and middle school and the reduction will cut out drawing, painting and ceramic sculpture electives. In a school year, there are about 30 to 40 kids who take these classes.” The high school enrollment is 315 students this year.

When reached for comment Athletic Director Tom Cunningham filled in the blanks on the impact for sports teams.

“Modified sports are the preliminary stages for seventh- and eighth-grade students to play junior varsity or varsity sports in high school,” Cunningham said. “Coaches teach the philosophy of programs and kids get experience.” About 60 to 65 students join these teams and won’t have the option in 2014-2015.

In the background of budget talks has been the contract negotiation between the board and the Haldane Faculty Association, the union that represents teachers and teaching assistants. Since the contract hasn’t been settled, Chambers has focused on the outcome as the district’s way out of the difficulty.

The pressure this has placed on the HFA is unlike any that other staff unions have faced during contract negotiations this year.

“Though the calendar and our contracts require notice of such reductions now, improvements in the budget picture at any time before the next school year could allow restoration of these positions and the program cuts,” Chambers said. “Indeed, one such possibility may emerge from the contract negotiations ongoing with the HFA.” 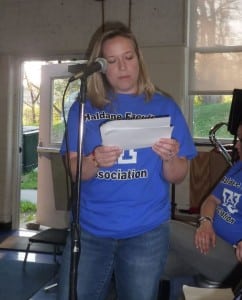 Leah Horn, middle school teacher and the president of the Haldane Faculty Association, reads a statement at the public hearing on the budget.

Leah Horn, HFA president and middle school teacher, said in a statement at the meeting: “We understand the board didn’t come to this decision easily. For the last three years, Haldane has seen numerous cuts to our programs and we have an unknown future. I implore you to stop using school programs to fund budget cuts. Cutting staff members should be the absolute last resort to achieving financial solvency. Let’s make a promise to find other alternatives to close the budget gap.”

Essentially, the HFA contract is being used as the one other place the district can make cuts and if only the staff will accept reductions in a compensation package, the district can make up their revenue shortfall there instead of proceeding with staff reductions. Horn said, “I feel strongly that we’re coming to a good agreement and will bring back a proposal to our members to preserve jobs and get fair compensation.”

Several students spoke about the impact that the art and sports programs have had on their time at Haldane. One parent, Cindy Chiera, brought artwork that her two sons had created in classes. She described her son as, “not even being able to draw a stick figure” before his art class and then displayed a detailed drawing of a cityscape as an example of a talent he had discovered through the class. Judy Farrell, who will lead the PTA’s voter turnout efforts for May 20, expressed concern about the cuts and urged the board to look elsewhere. She mentioned the BOCES contract as an example of one that should be evaluated.

Although the board listened and personally empathized with expressed sentiments, mentioning their own children who will be impacted by cutbacks, the decisions are final unless the situation changes. The hearing allowed community members to express concerns and issues, but was not actually a forum that would alter the course ahead.