President Barack Obama flew into the mist-shrouded Hudson Valley last Wednesday morning (May 28) to deliver a speech on military and foreign relations policy and to preside over the graduation of 1,064 cadets from the U.S. Military Academy at West Point.

The president’s helicopter landed at the region’s most storied institution just across the river from Garrison in time for the graduation ceremonies’ official start time of 10 a.m. The graduates had already entered Michie Stadium to the cheers of thousands of family and friends and were seated on the playing field. They crisply stood to attention when the commander in chief walked to the podium through a cordon of cadets.

Lt. Gen. Robert L. Caslen Jr., superintendent of the academy, made the introductory remarks before the president spoke. 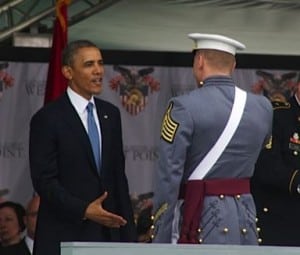 A graduate receives congratulations from the commander in chief.

The wide-ranging 40-minute address was intended as both a message to the wider world as well as a summary of the world situation the graduates will confront as they join the regular military. Climate change, refugee migration, and cyber attacks were among the threats cited along with rogue governments and terrorism.

Parents and family members applauded heartily when the president suggested that the class of 2014 might be the first whose members he did not have to send into combat to Iraq and Afghanistan. He said he would continue to tighten the criteria for giving such orders anywhere in the world declaring he would only do so, “when our core interests demand it; when our people are threatened; when our livelihood is at stake, or when the security of our allies is in danger.”

President Obama stressed that terrorism, perpetrated by small groups operating in many countries, remained the central threat to American security for the foreseeable future. “But a strategy that involves invading every country that harbors terrorist networks is naïve and unsustainable.” He said that not every problem has a military solution. He cautioned about the need for more fully thinking through the consequences of military engagement and leveling with the American people about the sacrifice required as among the prerequisites for going to war.

“I would betray my duty to you and to the country we love if I sent you into harm’s way simply because I saw a problem somewhere in the world that needed to be fixed or because I was worried about critics who think military intervention is the only way for America to avoid looking weak.”

He went on to describe in detail how he thought a combination of diplomatic coalition building initiatives, economic aid, increased training for other militaries as well as strategic U.S. military interventions would be needed to protect American interests and help maintain peace and prosperity around the world.

The most striking element of the speech came when the president announced a new plan to create a training program for the coalition of rebels fighting the Syrian regime. He said the Syrian situation had “no easy answers” but he believed the U.S. had to help the Syrian people stand up against a dictator “who bombs and starves his own people.” And he said more needed to be done to protect threats from refugees and extremists crossing the Syrian border into Jordan, Lebanon, Turkey and Iraq.

The president made clear that he believes — “with every fiber of my being” — in American “exceptionalism” and that America remains “the one indispensable nation.” No one else, he said, is going to assume the mantle of world leadership. Mentioning several different natural and man-made crises he said, “It is to America that the world looks for help.” Shortly after he added: “The question is not whether America will lead in the next century but rather how America will lead.”

As much as he looked forward in laying out a policy of engagement that reaffirmed U.S. leadership, President Obama also used the speech to review the military and diplomatic actions of his administration over the past five and a half years. He pointedly rejected criticism that under his watch the U.S. had retreated to a lesser role or that he had made the country appear weaker on the world stage. He cited several instances of American leadership diplomatically and militarily highlighting the pursuit and killing of Al Qaeda operatives including Osama bin Laden, the former leader of the organization.

“By most measures America has rarely been stronger relative to the rest of the world. Those who argue otherwise — who suggest that America is in decline or has seen its global leadership slip away — are either misreading history or engaged in partisan politics,” President Obama said.

The situation in Ukraine, according to the president, served as a ready example for the broader foreign policy approach he outlined. He said organizing quick multi-national condemnation of Russia’s intrusion into Ukrainian affairs backed up by stringent economic sanctions had so far proven effective in restraining Russian support for the so-called separatist movement in eastern Ukraine.

While he acknowledged the outlook remained unclear, the president heralded the holding of an election and Russian statements they will abide by the results of the election. President Obama said he had offered renewed economic support and other resources to the newly elected of Ukraine.

The president expressed national gratitude for the service of all those, including the 11 combat veterans graduating, who served in Iraq and Afghanistan. He also singled out 1st Lt. Gavin White, a 2011 graduate who lost a leg in Afghanistan, and who was present to exchange salutes with his sister Morgan, a 2014 academy graduate.

In a lighter moment, the president exercised his powers as commander in chief to “exonerate all cadets on restriction from all minor conduct offenses,” which received an enthusiastic response from the many members of the Corps of Cadets in attendance.

The president formally presented diplomas to 40 honor graduates who had distinguished themselves with a combination of academic, military and physical achievement. Once military officers took over the diploma presentation, the president stepped back but remained to shake every cadet’s hand.

The cadet (Matthew Anthony Mayeaux of Long Beach, Mississippi) ranked last in the class (“the goat”) received the traditional loudest cheer from his classmates. Approximately one in five cadets do not complete the rigorous four-year program.

At the conclusion of the event, the class, which adopted the motto “Forever One Team — 2014,” together took the commissioning oath as second lieutenants in the U.S. Army.

The young children in attendance, held back by a phalanx of underclass cadets, suddenly burst forward as the new graduates tossed their hats in the air. Tradition, so much a part of the day, allows for the collection of tossed hats, which may contain memorabilia, messages and money as well.

The field then filled with family and friends offering hugs, smiles, prayers and not a few tears.