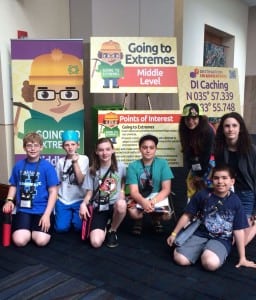 The team competed at the Knoxville Convention Center.

Haldane Middle School’s state champion Destination Imagination team traveled to the University of Tennessee in Knoxville May 21-24, to participate in the world’s largest creative problem-solving tournament: Destination Imagination Global Finals. Teams from all over the United States and the world competed. Participating nations included Poland, Turkey, China, and for the first time, Qatar. Each team solved one of seven central challenges and one instant challenge.

The Haldane team, “Stooges DI-ing for Sardines,” competed in the science challenge, “Going To Extremes.” Working since October, the team became experts on the extreme environment of the Cueva de Villa Luz in Mexico. They competed against 90 teams and finished in the top 19 percent at 17th place. Team managers Terese Olsen and Lisa Scicluna reported that the team achieved their best instant challenge score.

While in Tennessee, participants set a new Guinness World Record for the most people wearing Duct tape at the Global Finals Costume Ball in which DI-ers create costumes entirely out of Duct tape. At the Innovation Expo, NASA, the U.S. Space and Rocket Center, National Geographic and other companies and organizations offer Global Finals participants and spectators hands-on activities and exhibits.