Also talks of VFW and rails at news coverage

The Philipstown Town Board last Wednesday took the rare step of invoking eminent domain for easement access to a historic Indian Brook Road property and begin long-awaited replacement of an inadequate culvert-bridge over the brook, near the intersection with Route 9 in Garrison.

By a 5-0 vote June 25, the board authorized the town’s law firm to commence eminent domain procedures, including getting an appraisal to determine the amount to pay the owners, Ron and Barbara DeSilva, for easement rights to the strips of land at stake.

In other action, the board briefly recapped plans for selling the VFW building. Before adjournment, Supervisor Richard Shea and other Town Board members also lashed out at the Putnam County News and Recorder over a headline in the June 25 newspaper alleging board dithering on the Butterfield Hospital project, currently under review by the Village of Cold Spring, not the Town of Philipstown.

A legal term, eminent domain refers to the power of a government to seize private property for essential public purposes, with compensation to the owners.

The Indian Brook stream area just west of Route 9 suffered hurricane damage and the town wants to reconstruct the bridge. The town owns the road, a narrow dirt lane dating from the colonial era. In opting for eminent domain, Town Board members cited both emergency services needs and overall safety, plus requests from other Indian Brook Road residents that the town act.

Without upgrading, “it’s just primed for another disaster,” Supervisor Richard Shea said. “The town has made a good-faith effort to proceed with the project to replace the Indian Brook Road bridge” but seen the project “stalled on multiple occasions,” he said. Now, he said, after endless delays, it must move forward, but to do so, and to provide later upkeep, the town needs to go on the DeSilva property. Shea described eminent domain as “probably the heaviest-handed action a town government can take. We don’t go into it lightly.”

After protracted discussions between the town and the DeSilvas, Shea added, “there seems just to be a difference of opinion as to the extent of what we need to do,” with the town’s two consulting engineers and the private engineer hired by the DeSilvas at odds.

“It sounds like a dogfight between two engineers,” Councilor Nancy Montgomery commented. 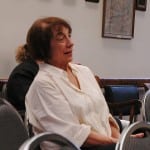 Barbara DeSilva presented her arguments at the Town Board meeting. Photo by L.S. Armstrong

From the audience, Barbara DeSilva noted the ongoing interaction between her engineer and the town’s engineers. “I thought we were coming to a resolution. I had no idea this [eminent domain] was going on,” she said. “The hold-up on this project was not me,” she added, as back-and-forth with the board ensued. “I would like to move forward because this affects me more than anybody else.”

She subsequently said that she thought the New York State park system’s historic preservation office or the Department of Environmental Conservation (DEC), or both, as well as the Federal Emergency Management Authority (FEMA) still had questions about the project.

Shea promised to check on any last-minute state or FEMA reservations. “We fully intend to meet all the requirements of FEMA, the state historic preservation office, DEC and the DeSilvas,” he said.

The exchange with DeSilva was cordial and more than once Shea told her that they can still reach an amicable agreement, if they act soon. “We only have a limited opportunity to do this” project seasonally, he said. “It’s time to move.” Nonetheless, “there’s still time to work on this” together.

After the meeting, when asked if Town Board eminent domain proceedings were common, Shea replied: “Not in my time [on the board]. Not in the last 13 years.”

Shea reported that an appraisal of the town-owned Veterans of Foreign Wars (VFW) building on Kemble Avenue is in the works. “The veterans have agreed we could dispose of it,” he said, repeating an announcement of a few weeks previous. “We feel its surplus property,” which could be sold, with the income used to fund improvements to the 1867 Town Hall complex. However, prior to any sale, “there’s still quite a few steps that have to be taken,” he explained.

The board took issue with a PCNR headline, Town & Village Hesitate on Butterfield, as Planning Board Begins Site Plan Review.

“I was not spoken to about that story. I think the headline is not accurate,” Shea said. He said he informed the PCNR “that I thought it was very unfair to print the headline like that, because it would give people the impression we were actively pulling back on Butterfield, which is not the case at all.” He stated that the town government was the first government to sign a letter expressing interest in a redeveloped Butterfield site.

“We were the first ones to sign a letter of intent. It’s something we’re still looking at,” Montgomery concurred. “I think it’s very unfortunate people spread lies about how we are holding something up.”

In both 2010 and 2011, the Cold Spring village and Philipstown governments expressed strong interest in acquiring space in a redeveloped Butterfield; the town sent letters, the Village Board passed resolutions.

“I think if there is going to be a headline in the paper it needs to be accurate,” Shea emphasized. “I just want everybody to know we are fully interested” in exploring with Putnam County, the village, and developer Paul Guillaro a government presence at Butterfield, especially a county-supported community senior citizen center.