In the Internet age, why leave the house to see live music? Bob Pinnola of the Jammers has a ready answer.

“We’ve got songs on our YouTube page, but to me, there’s still nothing like performing live,” Pinnola said. “We’re creating the songs for the audience in real time, and we feed off their energy, which just doesn’t happen in any other setting.”

The Jammers will perform at Whistling Willie’s in Cold Spring at 8:30 p.m. on Saturday, July 19. 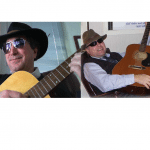 The Jammers play July 19 at Whistling Willie’s.
Photo courtesy of the artists

“People still want to get together, and music is still a big part of having a good time,” said Bob Cinque, also of the Jammers. So where did this “guitarists at law” thing come from?

According to Cinque, “We played together in a band called Dreamwork in college, and after he graduated law school, Bob started introducing himself as ‘Bob Pinnola, guitarist at law.’ I liked that so much that I used it in my musical.”

Cinque wrote and composed Pheenom, a rock musical that ran off-off-Broadway in the late 1980s, and Pinnola was the musical director of the production.

Cinque, who runs a law office in Brewster, has performed at many Hudson Valley venues over the years, both as a solo artist and with groups such as Fast, Cheap & Loud and El Cinque and the Desperados. Pinnola practices law in New York City and Long Island, and is the founder and guitarist for the Suburban Brothers Band, entertaining audiences on Long Island, Fire Island and throughout the New York metropolitan area for nearly two decades.