Selling products under the guise of “just picked” or “farm fresh” is all too frequently a patently false way of marketing products that bear neither of these qualities. 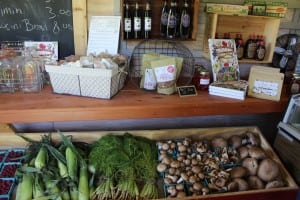 Some of what’s for sale — grown at Glynwood or nearby.

At the Glynwood Farm Store (GSF) however, these phrases are not a marketing ploy. Much of the vegetables and herbs for sale have literally just been pulled from the soil at the farm located off Route 301 in Cold Spring, and brought over in a tractor; all of the meat sold is livestock-raised on the farm. The rest of the expanded-this-year range of products sold is neighborly: all from within New York state and most from within a stone’s throw of Glynwood.

Glynwood first established the store a number of years ago as a means of selling their meat and eggs. Initially most sales were made to their Community Supported Agriculture (CSA) shareholders, a program which for years had a waitlist.

Homegrown in the Hudson Highlands

Expansion of the vegetable gardens led first to an increased number of available CSA shares and then, this year, to a supply with which to augment the meat and eggs in the store, which had already begun outreach beyond the CSA members. Now Glynwood’s homegrown produce fills the shelves, and a freezer is well stocked with different cuts of meat. These are joined by an evolving selection of products: syrups, honey, soaps, jams, pinto beans, cookbooks, all found and sourced through local connections and distributors, and produce like corn, raspberries and mushrooms grown at nearby farms with similar values. Making these regional connections is also part of Glynwood’s mission.

There is also a roster of prepared items — things like soups, kimchee, pesto, pickled radishes, granola, cookies and cakes — all made by Glynwood’s Executive Chef, Jodi Cummings, which changes weekly. And there is always a supply of those famously delicious Glynwood eggs. 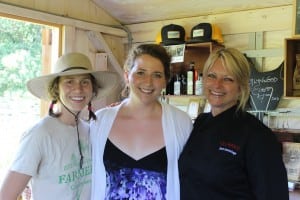 Beyond the provisions of the store itself is Glynwood’s desire to “Get people to Glynwood, to introduce them to our operations and our broader programmatic goals,” according to Ashley Holmes, Glynwood’s communications manager. “We envision it as a community center. We want people to learn about our work and the benefits of the food being produced here … the idea is to connect the dots between what is grown and raised to what’s on the plate.”

Together with Glynwood’s monthly “Farm Dinners” which feature meals made from Glynwood provisions, executed either by Cummings or by guest chefs working in partnership with her, and more festive events open to the public, the aim is to build more community interaction.

Cummings, who grew up in the Hudson Valley, went to the Culinary Institute of America, and has “always tried to find positions which reflect my sensibilities that you can taste the different in ‘just-picked.’ Working here at Glynwood is close to my own heart, growing up and seeing farming disappear and then come back. As a chef it’s critical that we pay attention to that,” Cummings says.

With less-familiar (along with the more standard) cuts of meat being sold, Cummings offers emailed explanations on how to use all the various parts. In addition, on Aug. 5, she will offer a “Tough Cuts” workshop, in direct response to the chorus of “I don’t know what to do with this” she has heard. She has previously taught workshops on other cooking techniques.

Glynwood’s Livestock Assistant Maddie Morley details what’s raised on the farm: “Cattle, sheep, pigs, egg-laying chickens, meat chickens and turkeys at Thanksgiving time. All of them are pasture-based and animal-welfare approved. We give certified organic feed to the chickens and pigs as a supplement to grass.”

Basil by the bunch

On a beautiful Friday afternoon last week, there was much activity at the bucolic store, something Store Manager Eugenia Copeland described — in between arranging truly “just picked” bunches of lettuce and basil — as the norm. “We get a lot of locals, but also people from as far away as Poughkeepsie and Peekskill. They’re very loyal — they don’t want to go anywhere else. Some of them are frequent customers — one woman comes in two or three times a week.” 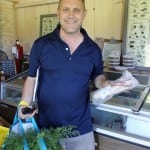 A satisfied customer, Craig Cutler, combines a visit to the store with his CSA farm share pick-up.

As if on cue, the woman referred to, Siobhan McGrath, of Beacon, came in just a while later, and explained that she shops at the store frequently simply because “It’s local, organic, and their eggs are awesome.” Another satisfied customer, Craig Cutler, who works at Saint Basil Academy, had a basketful of CSA produce on his arm as he examined a packet of bacon he removed from the freezer.

Glynwood’s official designation is “Certified Naturally Grown” (CNG). According to the CNG website, “To be granted the CNG certification, farmers don’t use any synthetic herbicides, pesticides, fertilizers, antibiotics, hormones, or genetically modified organisms. CNG livestock are raised mostly on pasture and with space for freedom of movement. Feed must be grown without synthetic inputs or genetically modified seeds.” As described on the CNG website, and echoed by Holmes, the CNG designation is tailor-made for smaller-scale farms selling in their local communities, such as Glynwood. “We use organic practices,” says Holmes, “but the cost of getting a certified organic designation is prohibitive for small to mid-sized farms.”

The store, which operates seasonally, from late May through the end of October (meat is available through the winter), is open in conjunction with the CSA pick-up hours, Tuesdays and Fridays from 3 to 6:30 p.m. and Saturdays, 9 a.m. to 12:30 p.m. There are also special opening hours for holidays. This year Glynwood introduced an online store, through which meat and eggs can be purchased and then picked up, either at Glynwood or at Little Joe’s Coffee & Books (formerly NoKa Joe’s Coffee Shop), in Katonah (See the website for more details.).

Glynwood’s meat and eggs are now being sold at the Cold Spring General Store on Main Street, and, new this year, their CSA shares can be picked up from the Garrison Café each Tuesday from 4 to 6 p.m.; eggs are on sale there as well. Outreach is currently being made to Beacon with hopes to offer Glynwood products for sale at a location there as well in the near future.

The next Farm Dinner will take place on Friday, Aug. 15, with an “Out In The Field” theme. Optional overnight farm stays are offered in conjunction with these dinners. See the Glynwood website for details and to make reservations.

To find the store, turn off Route 301 at the Glynwood Farm sign, and follow the two-mile long driveway, continuing through the stone pillars, to the parking area marked “Farm Store and CSA Parking.” Visit Glynwood.org for more information.