Regular theater-goers attending this season’s roster of Hudson Valley Shakespeare Festival (HVSF) plays — anticipating a radical departure from the style of the preceding 26 years in the wake of the changeover in artistic directors — will find this is not the case. 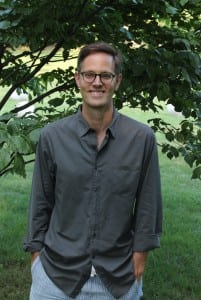 Davis McCallum
(Photo by A. Rooney)

Davis McCallum, whose first real day on the job was this past May 15, did not jump into the tent, waving a sword, creating dramatic intrigues. Rather, as only the second in that job since the company’s founding, McCallum is soaking in the season, living and breathing it with the live audience — the choice of plays, directors, cast and creative staff having been already designated prior to his arrival.

At a mid-season interview he was circumspect about his future plans for the company, noting that this year his “first role is to support the artists working here this season, forge relationships with all three directors and support their vision and those of the other artists.”

Focus beyond the players

McCallum noted that he has frequently been a visiting artist at theaters around the country during his career. A Princeton grad, his extensive resume includes a mix of regional Shakespeare and works by contemporary playwrights at leading off-Broadway and regional theater companies, from Playwrights Horizons and The Pearl to the Guthrie, Old Globe, Humana Festival and Williamstown.

He was also a Rhodes Scholar at Oxford — and this has given him the knowledge of “what makes an optimal experience for a guest artist.” Another goal, realized, was to meet the community, and watch them in action as patrons: “I couldn’t wait for the first preview to see where the focus was,” he said.

Before accepting the position (he was one of over 100 applicants), McCallum had the occasion to attend just one performance previously, but that experience was quintessential HVSF: racing in, a touch late for a Hamlet performance three summers ago, he was struck first, of course, by things scenic: “We took the path through the orchard and the view stopped us in our tracks. After we got our tickets I had a whole second wave of interest because of the quality of the production — it was a revelation.”

Drawn to directing after starting out as an actor, McCallum shifted because he found himself becoming “more interested in how we tell the story to an audience as opposed to ‘my relationship to my guy [character]’. Each play is a sequence of events and I wanted to have a hand in shaping the sequences of the building that the audience will pass through,” he explains.

Calling himself “very lucky to be the person who actually landed the job,” McCallum says devoting himself largely to Shakespeare, possibly at the expense of some of the contemporary work he has been doing, is not a negative in any way. He explained:

I was longing for an opportunity like this and when it came along I was intrigued and once I met with the people here, I was hooked … My first directorial experience was my most formative. It was in the Hudson Valley, at the Powerhouse Theater in Vassar. There’s an amazing tree on the Vassar campus, huge and held up by wire. I was told by the producer “Here are 14 actors and a tree. Tell the story of the play. There’ll be no stuff; if you must have chairs you can have them, but that’s it.” In that experience is the seed of something I’m pursuing under the tent. The tent is that tree; whoever’s under the canopy, you’re in the space together. That’s at the heart of why the festival’s been so successful.

So, next season when McCallum will have a hand in shaping style and content, from the vantage point of his just over two months in the job, is he ready to make any pronouncements? Not just yet.

“A lot of people have different ideas of what we mean when we say Shakespeare,” he says. “I was attracted to the job because of a real affinity of what [former HVSF artistic director and co-founder] Terry O’Brien was in pursuit of for 20-plus years and the one I’ve been in pursuit of as a freelancer. That said, I’m a different artist so naturally, I hope organically, some of what excites me about the theater — both as an artist and audience member — will be a part of what we do here. We’ll continue to engage, entertain and delight those who have been so loyal and also offer some new things and attract new audiences, too. It’s interesting to be running a theater that’s not a building. ‘There are no walls.’ Take what has been so magical under that tent and bring it to new audiences in the most powerful way.”

Asked what has surprised him most since assuming the job, McCallum reflects: “Intellectually I understood the atmosphere of celebration and the sense that the actors are not just playing to the audience but with and through the audience, but until you sit in the tent you can’t quite get your arms around it. It’s also been interesting how different the plays are night to night based on humidity, sunlight, et cetera. The actors who have been here a long time have figured it out: whatever happens, it’s essentially a gift — make it part of the show.”

The upcoming HVSF2 season of four play readings presented at and in cooperation with Garrison’s Depot Theatre, was wholly put together by McCallum. Previous years have spotlighted the actors, in different guises, cabaret and improv nights being a couple of those, but this year the play’s the thing, pointedly. “In many of the new plays I’ve done, Shakespeare is in their DNA — his ideas are replicated over and over again in plays which followed. Our mission can be achieved by doing plays not by him as long as they’re in some kind of relationship to him,” McCallum says. “I programmed this series from four different angles and they represent the kinds of things we might pursue in future seasons.” (See sidebar for details.)

At the conclusion of this season, McCallum will return to his Brooklyn home, joined there by his wife and his two young sons. He’ll do a reverse commute up the Hudson, continuing to be a presence in the HVSF office, planning next season while also directing elsewhere. Future years could potentially see a geographic shift, for, in a common refrain heard hereabouts, “We fell in love with this place over the summer.”