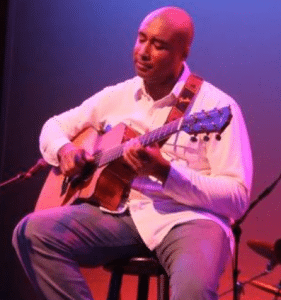 Still described in that four-word phrase, “Yankee centerfielder Bernie Williams,” the former baseball star has turned his focus to music since retiring. In his 16 years in pinstripes Williams was a four-time World Series champion and a five-time All-Star, with more postseason RBIs to his credit than any other player in major league history. No Yankees fan needs to be reminded that he stands near the top of the all-time best Yankee list in every major batting category, with his performance statistics often standing alongside such legends as Babe Ruth, Mickey Mantle, Lou Gehrig and Joe DiMaggio.

On Friday, Aug. 22, at 8 p.m., Williams and his “All-Star Band” will play a concert at the Paramount Hudson Valley, sure to draw a contingent of his ever-loyal fans.

Growing up in Puerto Rico, Williams discovered his love for baseball and music at roughly the same time, when at the age of 8 he fell in love with the sounds of a flamenco guitar his merchant-marine father brought home from Spain, and also felt the same exhilaration when he first picked up a baseball bat. He went on to attend a special performance arts school and then became one of the most noted young athletes on the island, both as a track and field standout and as a baseball prospect. When Williams signed a contract with the Yankees at age 17, he brought his love of music with him — to the Bronx, when called up to join the Yankees in 1991.

Throughout Williams’ years with the New York Yankees, his passion for music never waned, and the sound of a guitar would often be heard emanating from the clubhouse or during team flights — a guitar a constant presence in his locker or equipment bag. His first album, The Journey Within, featured fusions of jazz, rock and tropical rhythms and reached No. 3 on Billboard’s Contemporary Jazz chart. His second album, Moving Forward, featured a guest appearance by Bruce Springsteen and debuted as Billboard’s No. 2 Contemporary Jazz album. The album was nominated for a Latin Grammy Award for Best Instrumental Album in 2009.

Williams also co-authored a 2011 book, Rhythms of the Game: The Link Between Musical and Athletic Performance. The book examines the symbiotic relationship between musical artistry and athletic performance.

In addition to regular seating and pricing, there are premium, “meet and greet” tickets available for $100. The tickets, for seating in the first four rows, also include an opportunity to meet Williams after the show. Visit paramounthudsonvalley.com.