Visitation and services to be held Aug. 21 and 22 in Cold Spring for longtime resident and spiritual steward of village community

Margaret Rose Tellor Mills, a longtime resident of Cold Spring, died peacefully in her home at 48 Morris Ave., Cold Spring, on Saturday (Aug. 16), after a battle with cancer. Mrs. Mills, as she was affectionately known by almost everyone in the village and beyond, was predeceased by her husband of 62 years, Father John Gladstone Mills II, priest and rector of St. Mary’s Episcopal Church of the Highlands, in 2012. She is survived by her two sons, Dr. John Gladstone Mills III, doctor of laws, of Washington, D.C., and Dr. Charles Stuart Mills, doctor of medicine, and his wife, Rhonda Hochheiser Mills of Worcester, Massachusetts, and three grandchildren, Aliza, Talia and Benjamin. 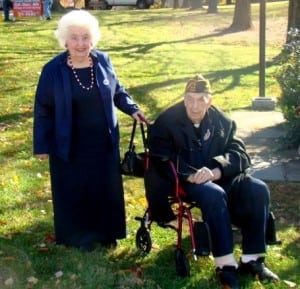 Mrs. Mills was raised in the Midwest, in Iron Mountain, Michigan, by her seven maternal aunts, after her mother died in childbirth when she was 3 years old. She lived most of her school years in Green Bay, Wisconsin, and Milwaukee, Wisconsin, where she lived with either her father’s sister, Rose Simanek, or her mother’s sister, Josephine DeLonges.

Both Father John and Mrs. Mills lived a life dedicated fully to public service and spiritual stewardship in the community of Cold Spring. They arrived in Cold Spring in the summer of 1961, one day after a terrible fire burned and nearly destroyed the church building of Saint Mary’s. She was an active partner with her husband and the entire community in rebuilding Saint Mary’s after the great fire and with invigorating the many activities of the church. 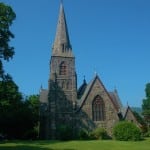 She was active in the Women of Saint Mary’s, the Altar Guild, the Cold Spring Historical Society, the Garden Club, innumerable church fundraisers and dinners. There was never a person who was in need in the community, for whom meals or help was not readily forthcoming from the Mills rectory. Pastoral counseling was not limited to Father John but was actively supported and augmented by Mrs. Mills. Even into their later years, their home on Morris Avenue was an open door for intellectual and spiritual nourishment. Her Sunday night gatherings, Bastille Day French celebrations and every seasonal holiday in between were renowned for the generous spirit of inclusion and warmth.

Her Midwestern charm included always remembering anyone’s birthday or special events with wrapped gifts and cards from her “gift drawers.” She believed in the power of prayer and the power of the written word and felt the imperative to maintain contact with cards and letters. She never failed to give thanks for any human kindness extended to her with handwritten acknowledgements. Countless charities had her “number” but the solicitations were never seen as a bother but rather as an opportunity to help.

She was always a true daughter of the Midwest in heart and in practice forever cheering anything that struck of the Wisconsin badger “red and white” or even more importantly, her beloved Green Bay Packers.

The family extends its thanks to all of her dear and supportive friends in Cold Spring without whom she and Father John would have been unable to remain in their own home throughout their lives. She will be missed by all who knew her. It had been her wish that contributions be made in her memory to the American Cancer Society.

Funeral arrangements are in the care of the Clinton Funeral Home, Cold Spring.