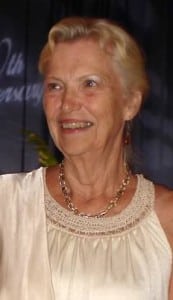 Caroline lived a full and adventurous life. She was professor of history and political science, first at Eastern Kentucky University then at Bellarmine College. She was on the board of directors of New Directions Housing Corp., serving as acting director for a short period. She was associate editor at The Louisville Courier-Journal, then moved to New York where she developed a peace education program that was accepted by the United Nations General Assembly.

She went on to be publisher of an international media guide and magazine. For 18 wonderful years, she was the proprietor of Salmagundi Books in Cold Spring, New York. She returned to Louisville in 2004. Never content to sit on the sidelines, she volunteered with The World Affairs Council, the St. William-St. Vincent de Paul Conference and Louisville Public Media. She was honored to receive a Bell Award in 2007 for her volunteer work. Caroline loved to travel and always kept up with international events. But the true loves of her life were her five children.

Donations in her honor may be made to the Louisville chapter of the Society of St. Vincent de Paul or Louisville Public Media.