Painted Betty is at it again. The local band fronted by female vocalists Deb Madsen and Sonia Ryzy-Ryski is newly reconfigured, heavier on the amplification, and ready to rock out at a club near you.

An upcoming Sept. 11 gig at the Towne Crier is most prominent in their fall schedule, which generally includes two to three monthly performances in the region. Painted Betty is also in the process of recording a new album, which they’ve already titled Midnight Buffet.

“We try not to take ourselves too seriously,” says Ryzy-Ryski. “We’re just fun, we keep it light, we’re not avant-garde at all, but — we want it to be good … We’re eclectic, and well-supported. Overall we do songs people can dance to, but it’s all a little twisted.” Madsen adds: “We came together for fun and were surprised how good the music could be. We tend to write whatever comes into our heads. Our songs are about life experiences, and actually they can be serious. We try not to be afraid.”

The band takes rehearsals seriously, setting aside Wednesdays on a committed schedule, which can be difficult with a mix of full-time and part-time musicians, each with non-traditional working hours and responsibilities. Dedication is key. Madsen is a nurse, and Ryzy-Ryski, a former fashion model, now has a successful hair and make-up business under the name of Celeste Von Damon.

She is also raising three sons, with whom she emphatically doesn’t share the music just yet (“It’s too inappropriate,” she says, — “the album art alone …”) just yet. Rothenberg, a philosophy professor and clarinetist, has a multi-dimensional career with interwoven strands in scientific research, largely related to music and nature, writing and teaching.

Both Madsen and Ryzy-Ryski sang in high school. Madsen, the huskier side of the trade-off vocalist duo, grew up in Somers and performed with a Ramones cover band called Some Kind of Freak. Ryzy-Ryski, a soprano, grew up in Shrub Oak, where she sang with a cover band which aptly summoned up the high school years with their name: Mass Confusion.

They both packed their singing away in storage after graduating. Meeting up as adults in Philipstown, they organically came together with the other original band members, who included brothers Tim and Andrew Hall, and began to be invited to perform at open mics.

It grew from there and Painted Betty was born and formalized. Its name was first derived from the Jerzy Kosinski book Painted Bird (which Ryzi-Ryski notes that she “hates, but I liked the name”), which she then “fed” into an online band name generator. The search brought forth Painted Betty, which everyone loved. “It’s a little weird that the painted bird story relates to the idea that if you paint a bird, other birds will notice it’s painted and peck it to death,” she details. Madsen added, “Well, we haven’t yet been pecked to death during one of our shows!” 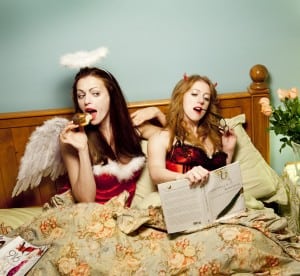 Both women feel comfortable with the two-vocalist dynamic of Painted Betty, Ryzy-Ryski calling it “nice to trade off on the vocals” and Madsen noting: “We can be saucy, but sometimes the atmosphere is, well, let’s just say there’s comfort in having another woman on stage at times — it’s like ‘I’m with her.’” Ryzy-Ryski also largely handles the business end of things, doing the books, trying to expand to new venues, making the push for their videos to be played more widely.

The vocalists are full of praise for the rest of the band. A lot of collaboration goes on. In terms of songwriting, Madsen says she usually comes up with a melody first, then gets the lyrics done, then brings it to Westin who “adds the life to it,” she says.

“We nabbed Mark and we were lucky,” adds Ryzy-Ryski. “He has a really busy solo career and he’s a prolific writer. He can swing from genre to genre and he’s a great lyricist. I like to collaborate on the lyrics; I find I need the ‘bridge’ and I ask for help.”

If Westin adds the life, Rothenberg contributes “the rich, buttery flavor” according to Ryzy-Ryski. Madsen calls Starr, who also played piano on the group’s first CD, Fifty Bucks and I’ll Show You, “fantastic.” As for Nicolas, Ryzy-Ryski says, “he had been in other local bands, like Monday Men and playing with Stephen Clair — he’s been really great — very dedicated.”

The change in lineup has led to an altered sound, both women concur, with Madsen noting: “All my songs sound completely different now with Mark. It’s like experimenting in the kitchen with food — it’s still good and now I’m going to try cooking it this way.” Ryzi-Ryski says, “We moved from a string bass to electric and from acoustic to electric guitar. We now have a huge band behind us that shreds. I don’t think people realize how hard we rock.”

Painted Betty will appear at the Town Crier at 7:30 p.m. on Sept. 11. Other upcoming dates include Brewster’s Clock Tower Grille on Sept. 5, Dylan’s Wine Cellar in Peekskill on Sept. 13, and The Wherehouse in Newburgh on Oct. 11. For more details and to listen to their music, visit paintedbetty.com or their Facebook page.