First 100 being installed on Haldane Walk of Fame

On another marvelous Hudson Valley August Sunday (Aug. 24) at noon, Dan Hughes was one of two people on the Lawrence Brigati Field, aka the Blue Devil Field of Dreams. A lone female athlete stretched before beginning her run on the track, now in its second season of use, while Hughes knelt in the sun laying brick in the Walk of Fame. 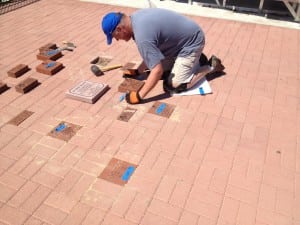 Hughes, the past president of the Blue Devil Booster Club, was co-chair of the PLAY Haldane project that helped to fund Haldane’s first turf field. The first 100 personalized bricks in the Walk of Fame are being installed in the area between the concession stand (now under construction) and bleachers.

Hughes estimates this inaugural batch will be laid in about two weeks, well in advance of Homecoming, Sept. 27. The first home game of the season is at 4:30 p.m. on Tuesday, Sept. 2; JV Boys Soccer takes on Hendrick Hudson followed by Varsity Boys Soccer on Thursday, Sept. 4, against Walter Panas.

Additional personalized bricks are being sold to raise funds to complete the concession stand/press box. The building’s first-floor shell is constructed and consists of two bathrooms, one that is handicapped accessible, a storage area for equipment, a sink and scrub room and a concession area, which when completed, will have rolling gate window closures.

This construction was funded by excess donations raised during the PLAY Haldane project, including the monies raised by the initial 100 bricks. The project had set a goal of $100,000 to build the turf field and track as well as to upgrade the locker rooms and the auditorium audio-visual system. Since over $130,000 was raised, construction on the concession building was started. Dave DiGregorio is credited for the construction of the concession building to date. Volunteers and donated materials are being sought to complete construction on the second floor, which will house the press box and coaches’ area. Roger W. Hoffmann, Architect, PLLC, donated both the architectural design and drawings of the concession stand.

Danielle Musso donated her expertise to design the layout of the Walk of Fame. Center bricks honor Lawrence Brigati and Mark Villanti. Brigati, for whom the field is named, was the Haldane varsity football coach for over 32 years and grandfather to the new Varsity Football Head Coach Ryan McConville. Brigati died in March 2013, and his family asked that in lieu of flowers, donations be made to PLAY Haldane.

The families of two other members of the community with strong ties to Haldane who also died in March of 2013, Kathyrine Thorpe and Sara “Sally” Peparo, requested the same and collectively these three families donated $10,000 to the project. A brick purchased by the Haldane Foundation honors former superintendent Mark Villanti, a staunch Blue Devil and PLAY Haldane supporter who retired in January 2014, after the first season of Blue Devil sports on the new field.