Lisa Scheffer paintings at Galaxie 13 intend to creep out

Lisa Scheffer’s father was an early adopter of “strange, odd stuff” and all things gothic. “Let’s put it this way: He doesn’t shop at Bed, Bath and Beyond,” Scheffer said. “For one of my birthdays he got me a model of Rodin’s The Thinker in skeleton form.” 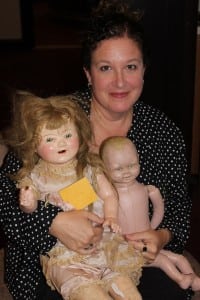 Lisa Scheffer with two of her scary dolls

Perhaps Scheffer’s attraction to “macabre, weird collections and things” is genetic. Scheffer has roamed flea markets, searching for what she likes, including taxidermy animals, “the creepier the better,” she notes.

Over the past few years, Scheffer’s main curiosity has been directed at dolls. Scary dolls. Which doesn’t necessarily mean they were originally designed to be scary, but over time they have taken on a new, eerie dimension, through peeling skin, an eye slightly askew, a missing limb, or just through the prism of Scheffer’s take on things.

Recently, Scheffer, an artist, has begun to paint the dolls, sometimes singly, sometimes with another of its kind. She has created a Night Gallery of doll portraits, with each doll’s features heightened, somehow in a less-than-comforting way, intentionally.

Now, in a Halloween-inspired showing, Galaxie 13, the vintage shop in Beacon which describes itself as home to “… an eclectic array of antiques, oddities, curiosities, art, jewelry, furniture and a bit of modern thrown in …” has turned art gallery for the month of October. Galaxie 13 will exhibit Scheffer’s works — several of the subjects having returned to the store where they were purchased — when they have a doll they think Scheffer might like, they let her know, and they’re usually right.

Falling in love with art and finding a sinister subject

Scheffer has always painted. Taught first by her father, whom she calls “very artistic, though not an artist for a living,” she learned from him and fell in love with art. Growing up in Hopewell Junction in the house her parents still live in today, she and her father painted together on easels in the basement. Digging through things in the house, Scheffer recently came upon her first painting, of daisies and birds, “in every color imaginable.” It wasn’t scary, but another find was — “a fox stole, with the little feet!” she exclaimed happily. 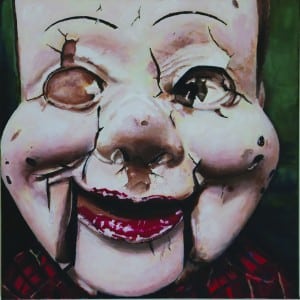 As a girl she drew cartoons, and wanted to become an artist, but she didn’t know what kind. Her parents didn’t think that was a good idea and wouldn’t let her go to art school. Instead, she attended Dutchess Community College for academic fundamentals, and then, older and more certain of what she wanted, she applied to and got accepted at the Fashion Institute of Technology (FIT), majoring in advertising design, minoring in illustration. She found herself drawn to graphic design more than advertising, however, and shifted accordingly.

In that pre-computerized era, that meant mechanicals, paste-up, etc. all done by hand, something Scheffer misses now to some extent. “It’s a shame because there’s no craftsmanship anymore,” she said. “It’s a lost history.” However, Scheffer has embraced the new as well, enjoying the many software programs in design, and when not painting scary dolls, can be found working in creative services for RKG Fundraising Services, a Philipstown marketing business.

A few years ago, on a trip to Austin, Texas, Scheffer came across a doll she was quite taken by. Bringing her home, Scheffer simply decided one day to paint her. She started acquiring more dolls, drawn to those with cracks, a little broken up, with unusual eyes. She estimates she has over 50 of them now, kept mainly in a painting studio in her house, obtaining them largely from flea markets and antique stores. Scheffer wasn’t initially sure about one in her collection. 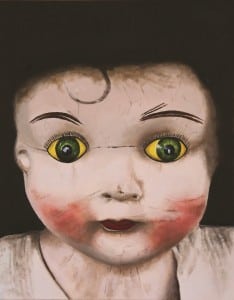 “It didn’t look too creepy to me,” she says, “and I was on the fence until the guy selling it pointed out that “come on, she’s got yellow eyes and things missing.” That doll, whom she calls “Eva,” now serves as the postcard image for the exhibit.

Scheffer says that dolls in the antique trade are now often broken down and sold for parts — there are specific brands that collectors want and often they just want a particular limb or other part. She finds that often sellers are pleased to sell to her, knowing the doll will stay intact. Most don’t have stories attached to them, so they arrive with some mystery.

Scheffer names each of them after someone she knows, and begins each painting process by photographing the doll, because “that way I don’t have to worry about changes in the light, from day to day once I’m painting.” She then tinkers with the photographic images in Photoshop, before finally painting. 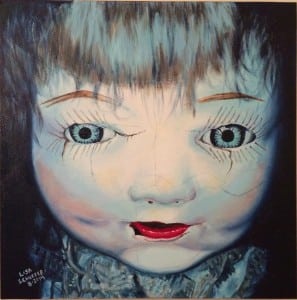 Right now, Scheffer enjoys just painting the dolls. Occasionally she will honor a special request, one being a life-size painting of her sister’s Irish Wolfhound done last Christmas. “It was a little strange,” (presumably in a good way) says Scheffer.

Scheffer calls herself inspired by an interview with Henri Matisse, done in 1941, which she found in a book called Lost Interviews. “He said true artists paint for themselves, what they want, their passion, and that’s when your best work comes out. With the dolls, I know which ones I want to paint, which one should come next, and I really enjoy the process.”

This exhibition came about simply through Scheffer’s visits to Galaxie 13. She explains:

I started going in, we clicked and talked. They knew I loved dolls and we started talking about what we loved overall, a lot of stuff from my childhood. I told them I was really into painting creepy dolls and they said they’d love to see my work. So I snapped a few pictures on my iPhone and got a great response — Phil (Evans) said he would love to show the work. I’m so excited to show there and I love that it’s not a gallery. I’d like to sell them for non-crazy prices that people can afford, after all you can never set a price for the love and passion.

2 thoughts on “Scary Dolls on the Loose”