As Scots flocked to the polls Sept. 18 to vote on becoming a separate nation, a few of their neighbors in Northumberland, the large English county bordering Scotland, gathered for an impromptu dinner party in an old cottage in a rural hamlet. A couple of Americans — my husband and I — joined the get-together, too.

We were renting the cottage, which belongs to a friend of mine, who mostly lives in the rectory of the Anglican parish where she serves as pastor, in a larger town several miles away. My priest friend suggested the dinner, to allow me to visit again with village residents I’d met previously (in my non-news media alter ego incarnation as a medieval historian and putative novelist). It was a terrific idea and the three of us shared the preparation tasks. 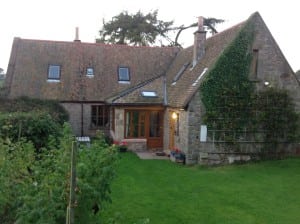 My contribution was the dessert — what I call Scottish Apple Pie, thanks to the oatmeal in its topping. The Scots are known for their love of oats, though Northumbrians and others in similar northern climes share the affinity. (While we got busy, we wondered how the Scottish election was going. Like everyone else, though, we had to wait until the next morning to learn that the Scots had resoundingly said “nay” to independence.)

I’ve been baking cookies, pies and cakes since I was about 8 years old and over the years started tweaking recipes and then devising my own — like Scottish Apple Pie. Like so many inventions, it was born of necessity one day when I was making a pie for a church bake sale or something urgent and realized I lacked enough flour for a top crust or even a crumb “streusel” topping. So I substituted oatmeal, the traditional, longer-cooking kind, not instant oatmeal or quick-cooking oats. Somehow, given the oatiness, brown sugar seemed more suitable than granulated white sugar in the topping, so that’s what I used. And I decided I like the results. So do family, friends, and patrons of St. Mary’s Episcopal Church bake sales. The pie also won an award a few years ago, in a contest at Boscobel during an autumn apple fest. (Perhaps one “plus” is the pastry. Maintaining that a pie’s crust should taste as good as the filling, I developed a basic dough that resembles a butter cookie.) 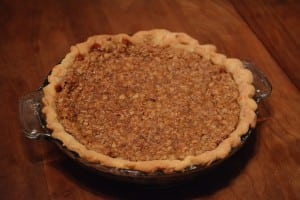 However, baking Scottish Apple Pie in the isolated Northumbrian countryside posed challenges. First, the rich butter I planned to use in both the pie shell and topping had to be replaced by a non-dairy substitute, when my friend told me that one of the guests could not tolerate milk and related products. Luckily, the cottage larder included an ample supply of margarine, the creamy kind in a tub. Because I’ve found that pie crust comes out best when made with cold, hard shortening, I hoped the tub margarine would work.

To my relief, it did. Second, I store my recipe creations on an external hard drive, which I had not packed with my laptop computer. Thus I had to go by memory. Third, I had to “translate” the oven temperature from 375 Fahrenheit to the Celsius equivalent; a chart my friend keeps on the inside door of a cabinet helped immensely. Similarly, I had to use metric measuring utensils, instead of my familiar one-cup, half-cup, and so on, when assembling the ingredients. (The Internet was no help in checking equivalencies, since the village, or much of it, lacks Wi-Fi. Actually, the cottage doesn’t have a landline phone or “telly,” either, adding to its serenity.) Finally, given the limitations of a cottage kitchen, I needed to use a counter-top convection oven instead of the stove oven. But the little oven was large enough for the pie and worked beautifully.

The evening was a delight — wonderful company and a meal of fresh vegetables from the garden, a tender and juicy roast, excellent local cheeses and assorted nibbles, fine wine, and the pie, which drew raves.

Typically, I bake two apple pies at a time, to put one in the freezer. This time, given the small oven, I just made one, but made enough dough and topping to save for a couple of days. Fresh apples remained in abundance, too (some from cottage-yard trees). Before we left the cottage to return to the United States, I baked a second pie and put it in the freezer, for the next dinner party at the cottage, or to help out at another church bake sale — this time in my friend’s Anglican parish, not Cold Spring.

1 cup raisins or dried cranberries or other berries (optional)

Flavoring: 2 teaspoons cinnamon, or substitute pie spice or a mixture of spices, such as ginger, nutmeg, or allspice, blended with the cinnamon. Or use 2 tablespoons of rum, Scotch, Calvados, or similar alcohol.

At least 1 cup cold water, cider, or similar liquid. (The amount of required liquid varies based on the juiciness of the apples and on whether alcohol is used as the flavoring.)

Make the pastry first: Mix flour and confectioner’s sugar. Cut butter into small pieces and blend into flour mixture until all the dry ingredients are absorbed and the result is a “meal” of small, even lumps the size of large peas. Add just enough ice water/milk combination to form a smooth dough that rounds into a ball. Divide the ball in half and roll out each half separately on a floured surface with a rolling pin until about 1/8 of an inch thick. Put into an ungreased pie plate, leaving an overhang of an inch or so. Fold the overhanging dough under, crimp, and make a fluted edge around the top. (Any dough trims from the edge can be baked as butter cookies.) Repeat with the second allotment of dough. Chill crusts while preparing the filling.

Filling: Mix cornstarch with white sugar and spice. Put one third to one half of the apples in a heavy saucepan with 1 cup raisins or dried berries and add enough liquid to cover the fruit. Mix in the cornstarch and sugar. Cook over medium heat until liquid is thick and clear and raisins get plump. Remove from heat and stir in the remaining apples. When cooled a bit, spoon the filling into the pie shells.

If possible, use “crust protectors” around the fluted edge to protect the crust from getting too brown. (These are thin foil sections, about ¾-inch wide and 5 inches long each, that can be found at kitchen supply stores.) If lacking crust protectors, use aluminum foil strips. Or periodically brush the fluted rim with cold water.

Bake the pies 20 to 25 minutes while making the topping.

Topping: Mix the flour, sugar and oatmeal. Cut in the butter. When the dry ingredients are all blended with the butter, drop the mixture over the open pies until the tops are covered.

Return the pies to the oven for another 20 minutes. Then check: If the topping is set and baked, the filling is beginning to bubble out, and the crust is a light tan, remove pies from the oven. If necessary, bake 5 to 10 more minutes, but do not over-do it.

Serve the pie warm, with ice cream or whipped cream as desired.

The pies freeze well after baking if wrapped in cling-wrap and placed in a large freezer bag.

One thought on “The Baker’s Bench: Scottish Apple Pie”