What’s in a name? Apparently a great deal, at least when it comes to the onerous task of naming a new group of community volunteers who will tend to the health and well-being of trees found on lands owned by the Village of Cold Spring. The Tuesday (Oct. 27) meeting of the Village Board stretched over three and a half hours, with the first hour dominated by an often unruly and disjointed discussion over whether to call the new entity a committee, a board or a commission.

At times, the board, minus Deputy Mayor Bruce Campbell who was absent due to a family matter, watched as the audience of about 25 residents conducted a freewheeling conversation largely on its own, exchanging questions, comments, barbs and opinions. In the end, more through attrition than consensus, trustees voted to name the new group the Tree Advisory Committee.

The new five-member committee will be appointed by the Village Board as part of the Public Tree Law, a draft ordinance that will be subject to a public hearing on Dec. 2. The raucous discussion regarding the committee name was part of a broader review of that new law, which was drafted by an 11-member committee chaired by Jennifer Zwarich. 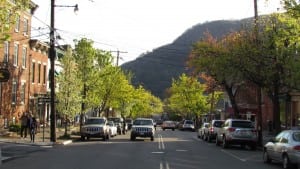 The Public Tree Law will apply only to village-owned trees such as those along Main Street. Trees on private property will not be affected.

That group also drafted a Tree Management Plan that details a strategy for conserving the more than 430 village-owned trees, a resource that Cornell Cooperative Extension has valued at $1.8 million. Zwarich’s group, which, for better or for worse, is also called the Tree Advisory Committee, will be disbanded once the new law is enacted. The new Tree Advisory Committee will then take up implementation of the Tree Management Plan. The new law deals only with village.

During the contentious discussion, the authority of the new Tree Advisory Committee’s authority, or at least perceptions of its authority, was an issue. Zwarich stressed a number of times that the proposed Public Tree Law clearly defines the yet-to-be-appointed committee’s role as strictly advisory, with decision-making powers resting with the Village Board. She argued unsuccessfully to name the group either a “tree commission or “tree advisory board” — in part, she said, to avoid confusion over having both the outgoing and incoming groups named a Tree Advisory Committee.

But Trustee Michael Bowman commented that using “board” or “commission” would also create confusion because the terms carry with them “implied authority.” Village Attorney Michael Liguori confirmed the committee’s advisory role. However, he said, “There’s a little more to this,” pointing out that some of the new committee’s work, such as operating a village tree nursery, would entail decision making, implying that “committee” was not as appropriate as either “board” or “commission.”

Resident Gordon Robertson expressed concern that the new committee represents “a second layer of government” and questioned the need for such a committee. He recalled the days when the whole community got together to do projects. “That’s how the Tots Park got built,” he said. “Then people started getting on committees…” Zwarich countered that the work that is required to steward the village trees needs to be better planned.

“Part of the problem is that the work is not organized,” she said. “Just look at the tree-scape … trees are dying,” she said. When resident Airinhos Serradas complained that his attempts to FOIL (Freedom of Information Law) Tree Advisory Committee documents were unsuccessful, a clearly frustrated Zwarich shot back that the committee had always adhered to the Open Meetings Law.

One area where there was widespread agreement is the desire to have a professional arborist serve on the new committee. While preference will be given to village residents, the Public Tree Law will permit a non-resident arborist to be appointed.

Mayor Ralph Falloon admitted that he erred recently when he directed highway department staff to move boulders along the edge of the Cedar Street cemetery in order to create additional parking. When the boulders were moved, a footstone in the cemetery was pushed out of place. “Unfortunately for me I had no authority to move the rocks,” Falloon said, adding: “My apologies. You have to do what is right — and make up for what is wrong.” The boulders have since been moved back to their original location.

Earlier in the week, Falloon and Trustee Michael Bowman met at the cemetery with members of the Putnam County Cemetery Committee. Catherine Wargas, who chairs that committee, made a number of recommendations including having the boulders moved further to the street’s edge and fencing the perimeter of the cemetery. One of the issues that contributed to the recent confusion is a lack of clarity as to the exact boundaries of the cemetery.

Adding further ambiguity is the fact that because it is no longer receiving burials, the cemetery is now the property of the Town of Philipstown. A resident who attended Tuesday’s meeting suggested that a $650 cemetery line item in the village budget, which has remained untouched for years, now be used to make improvements at the cemetery.

Falloon had explained previously that he had the boulders moved in order to help residents along the street who are inconvenienced by inadequate parking — especially during times when students are picked up or dropped off at Haldane. At Tuesday’s meeting Trustee Bowman said that Haldane should address its parking issues, suggesting that the school has enough property to do so, including the James Pond area. Falloon said that he will send a letter to Haldane outlining the problem and will also ask the parking committee to look into alternative solutions along Cedar Street.

Residents may soon enjoy a longer time period for completing construction projects that require a building permit. Trustees are considering a two-year time limit on permits, with the possibility of up to two one-year renewals if an extension is needed to complete the work. Currently, the zoning code calls for building permits to be issued for a six-month period followed by renewals of three-months’ duration.

Previously, Building Inspector Bill Bujarski had been issuing one-year building permits with one-year renewals, a practice he said he inherited from the previous inspector, but that did not conform to the Village Code. Trustees voted to reduce the cost of renewals from $100 to $50 while changes in the permit system are being reviewed. In part, the changes are being contemplated in order to align the village permit system with that of the Town of Philipstown, which is responsible for property tax assessment in Cold Spring.

Trustees are again revisiting the village sign policy. A section of the Village Code that deals with signage was struck down by a federal appeals court in 2005 as a result of a suit brought by resident Donald Lusk, who argued successfully that the law infringed upon his right to free speech. The offending section has never been rewritten, leaving the village unable to enforce part of its sign policy.

Trustees took up the issue several months ago, after concerns were raised regarding the proliferation of temporary signs at the corner of Chestnut and Main. At Tuesday’s meeting, Falloon asked trustees to submit their ideas on possible restrictions to the size of signs that will be permitted. While the First Amendment doesn’t permit the village to regulate sign content, it can regulate the size and location of signs placed on village property. Once size restrictions are agreed upon, Liguori will rewrite the local law, which applies only to signs placed on village property.

The Village Board approved a request by the Parking Committee to eliminate the lines that mark parking spaces on the north side of Main Street, a move that will increase parking capacity by up to 15 percent. Trustee Cathryn Fadde, who chairs the committee, reported that the experimental removal of the lines on the south side of the street has been a success. 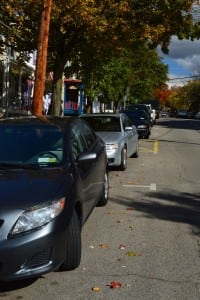 Parking lines on the north side of Main Street will be removed after an experiment on the south side of the street showed increased parking capacity.

The committee has also recommended that numerous signs on village streets that don’t conform to the Village Code be removed and also submitted a list of signs to be added to village streets. Trustees will consider both requests at a future meeting.

As he did last week, resident Michael Robinson expressed concern over the mass and scale of the proposed Butterfield development. The concept plan for the multi-use project was approved by the Village Board as part of the B4A zoning amendment for the 5.6-acre property in May of this year. Questions have been raised by members of the Planning Board regarding their ability to comment on the size of buildings during the site- plan review, which is now taking place.

Falloon said he has discussed the issue with some members of the Planning Board and will report his findings to the Village Board once the interviews are complete.

The new Zoning Update Committee will meet for the first time on Oct. 30 even though village trustees have not signed off on the agreement with New York State Energy Research and Development Authority (NYSERDA), which is providing the $75,000 grant to enable the committee to do its work. The project will bring the outdated village zoning code into conformity with the 2012 Comprehensive Plan.

Trustee Stephanie Hawkins reported that in recent conversations with NYSERDA, staff there indicated that because they are about to receive the next round of grant applications, they will not entertain further changes to the draft agreement. The grant was announced in December 2013.

Putnam County has agreed to undertake a drainage project at the intersection of Morris Avenue (Route 9D) and Craigside Drive as part of an intermunicipal agreement with the Village of Cold Spring. The village had received approval for a grant of $25,000 during Anthony Phillips’ time as mayor.

The county has now agreed to take on the $75,000 project. In exchange, Cold Spring will take care of snow plowing at the American Legion and the Putnam County Sheriff’s garage in Nelsonville. Falloon said that Phillips, who spearheaded the original grant application, was instrumental in finalizing the agreement with the county.