Not many amateur photographers, heeding the advice “you should take a class,” emerge less than a decade later with a published coffee-table book of their photographs. For Philipstown’s Christine Ashburn, the leapfrogging from novice to pro began about nine years ago, when friends, seeing her photographs, suggested just that. She signed up for a course at the Garrison Art Center — a darkroom class taught by Cali Gorevic. 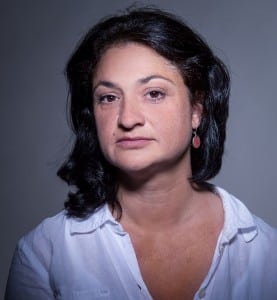 Encouraged by Gorevic’s assessment, “You can capture people,” Ashburn continued with multiple classes at New York City’s International Center of Photography, most notably with Harvey Stein, a well-known portraitist and street photographer. In her work there, Ashburn embarked on a long-term project, photographing people getting married at City Hall.

“I would approach people there, telling them I was a student, and asking permission to shoot their ceremony and giving them a free CD of the shots. Amazingly they allowed me,” she said.

Ashburn submitted several images to Garrison Art Center’s first PHOTOcentric contest, in 2009, and won third place. She kept honing her skills and eye through more classes, and finally, a year ago, made the big decision to officially call herself a professional photographer — something not surprising to many who have seen her work over the past few years, which includes a series documenting the final days of Guinan’s Pub and Country Store in 2007 and early 2008.

“My photography always stood out,” Ashburn said. “It had a strong sense of composition, which I just knew instinctively.”

Born in the Bronx, she moved from there when she was 3 years old and grew up all over the place, including New Jersey, Texas, and California. Ashburn recalled:

With my family growing up, I moved every year to various places in the U.S., including Colorado and the Aleutian Islands in Alaska. I came to appreciate the diversity in which people lived; how the environment impacts their sociology. I was always excited by observing the differences and have also always relished in the feeling of being a stranger in a strange land. This led me to study anthropology in college. I dreamed of exploring the remote tribes of Papua New Guinea but I instead choose to settle down and have three children. Instead of going to remote regions of the world, the camera provides a license to continue exploring, albeit in microcosm, the people and places that surround me while still being home for my kids every day after school. I was recently told by a farmer that there are a disproportionate amount of farmers who also studied anthropology and I would imagine this is the case for photographers, as well.

Ashburn’s specialty is what she calls “environmental portraiture” — portraits putting people in their surroundings. Calling herself “meticulous about composition and light (both natural and artificial), given my background in street photography and my specialty in portraiture,” she enjoys “both the photojournalistic and the formal-portrait approach to capturing events.”

Ashburn has no indoor studio. “I go to different places every day,” she explained. “My primary focus is people.” Her mix of subjects includes wedding photography — “I believe in love and enjoy weddings; I’ve been shooting them for about a year now. Long days, but I really enjoy it.”

Ashburn, whose work has been published in Edible Hudson Valley, also documents the community — she’s lived in Philipstown for 17 years now — covering communions and confirmations for Our Lady of Loretto, nursery-schoolers at St. Philip’s, bar mitzvahs, reunions, etc. She also does portrait work: head shots, family photos and more.

She continues to evolve in her craft, recently attending a four-day workshop in Santa Fe, New Mexico, on “five-minute portraiture” — how to get your shot quickly.

Ashburn said that her favorite subjects are farmers, because “they rock. If I wasn’t a photographer I’d be one.”

Thrilled to have had the opportunity to document the Hudson Highlands for the Land Trust’s 25th anniversary book, Ashburn spent a year on it, shooting about 15,000 photographs, from which 500 were selected for review by the photo editor, Alice Rose George, and 72 for publication. “When I got the proofs, I felt part of the history of the Hudson Highlands, and when I read the essays I felt completely honored,” she said.

3 thoughts on “‘The Camera Provides a License to Continue Exploring’”