The Butterfield development was not on the agenda; however developer Paul Guillaro and his attorney, Steven Barshov, attended the Nov. 10 (Monday) meeting of the Cold Spring Village Board and while the former said nothing, the latter had plenty to say.

Barshov began an impassioned presentation “to answer unanswered questions” raised by Trustee Stephanie Hawkins, who acts as liaison to the Planning Board. Hawkins has echoed concerns raised by four Planning Board members — that Anna Georgiou, special counsel, and consultant Chuck Voss had led them to believe they could discuss the “mass and scale” of the Butterfield project during site planning, but that when that process got underway they learned that such a discussion could not take place.

Barshov used a controversial Oct. 14th letter from Georgiou to the Village Board as the basis for his commentary. It was the first public airing of the letter’s contents. 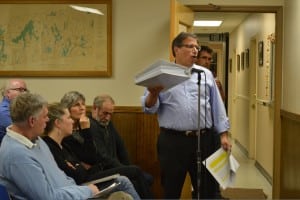 Attorney Steven Barshov refuted claims that Planning Board members were confused about the site plan process for Butterfield.

The letter disputes claims that mass and scale were not considered during the Planning Board’s SEQRA (New York State Environmental Quality Review Act) work on Butterfield. Barshov pointed out that the SEQRA “negative declaration,” indicating that the project will have no significant environmental impact on the village, has never been challenged and that the statute of limitations for challenging it has long since passed.

Reading from Georgiou’s letter he was emphatic, underlining that “potential community character impacts, potential visual impacts, and the mass and scale of the Butterfield redevelopment were reviewed throughout the SEQRA process…” He added that review included the then-proposed B4A Zoning and the concept plan proposed for Butterfield, an analysis that looked at “the worst case scenario” or maximum development allowed.

Barshov also pointed to a key memo that the Planning Board sent to the Village Board expressing its concerns about the then-pending B4A zoning and concept plan, along with its recommendations on suggested improvements. He again quoted Giorgiou’s letter which states that “the Planning Board acknowledged that its ability to modify … the concept plan during site-plan review was significantly constrained and restricted under the proposed B4A zoning amendments” and it asked that the Village Board give it greater ability to make modifications.

Barshov was very clear in his opinion regarding any unanswered questions raised by Hawkins and members of the Planning Board. “Is there a question that remains unanswered? No,” he said. “The Planning Board knew exactly what their authority was under the proposed B4A zoning and they weren’t happy about it. And they told you [the Village Board] … in no uncertain terms. And you adopted a law that did not give them the discretion they wanted … and that is where we stand today. “

In a reference to Hawkins, the lone trustee to vote against the B4A zoning, Barshov added: “You voted and the one … that didn’t go along with that … has to accept that decision — that’s the way democracy works.”

While Barshov stopped short of threatening legal action against the village he came very close. “My client has a right … to vest his rights under the applicable zoning by proceeding in a normal fashion to get his application heard and reviewed,” he said. “…There is liability when people attempt to turn around and stop the applicant from being able to do so. This is getting perilously close to that.”

Hawkins interrupted: “Are you here to threaten us … with legal action on behalf of your client?” Her question led to a brief but intense exchange between the two. 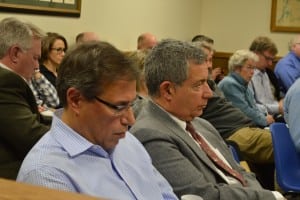 “Miss Hawkins, when I’m here to threaten you with legal action I will say the following words: ‘You are threatened with legal action,'” Barshov replied. “Did you hear those words come out of my mouth? No. I want to avoid legal action. I want to tell you what the law is so you can comply with it and we can go on with reviewing this application. This is all a side show for the purpose of obfuscating the review of this application and preventing it from going forward in a normal way.”

Hawkins repeated her concern that “Planning Board members from our community, volunteers who worked very hard on this, were … very surprised … to realize that they did not have the authority that they had been told that they would enjoy at the site-plan review.”

Barshov shot back. “When they sit down and say what they have to say at an open Planning Board meeting I’ll be happy to address it. Right now it’s ‘he said; she said; they said,’” he maintained. “I’ve given you the answer … you may not be satisfied with it, but it is the answer.”

“I’m not looking for an answer from you,” Hawkins replied.

“You asked questions that were unanswered — I’ve given you the answer,” Barshov concluded.

Calls for three to be ousted

Resident Michael Robinson weighed in, repeating claims that Planning Board members had been misled. “I do not see how you can proceed in this process with [Planning Board Chairman] Barney Molloy, Anna Georgiou and B&L [consulting firm Barton and Loguidice], given their … proven record of misguidance,” he said.

Speaking directly to the Village Board he added: “If you guys were CEOs and you had advisors that screwed up and led you down a road like this … you would fire them. And that’s what you should do with these three people.” He also responded to Barshov’s claims that the Butterfield application is not being handled in a timely manner.

“I’m sick to death of this obfuscation stuff … that we don’t want this project to happen,” Robinson said. “I have not spoken to one person … that does not want this thing to happen. I’m going to go even further. I want it to be big … as long as it is Cold Spring big … not Westchester big. “ 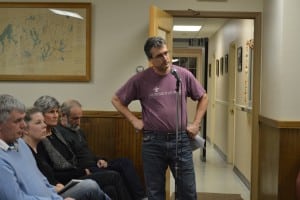 Michael Robinson called for Molloy, Georgiou and Voss to be fired.

When questioned by Trustee Michael Bowman, Robinson said he had not attended a meeting at the firehouse at which of the Planning Board presented its recommendations on the B4A law. “It was very clear to us what that document meant,” Bowman said. “[But] instead of discussing mass and scale we spent 45 minutes arguing about a coffee counter.”

Bowman also said he had watched a video of last week’s Planning Board meeting and that one board member had actually corrected the attorney for the developer regarding the limitations of the B4A zoning. “I don’t see where there’s confusion,” he said. When Robinson asked about the questions raised by Planning Board members, Bowman said that none of them has approached him with their concerns.

Greg Miller read a letter by Cold Spring resident John Plummer, who could not attend Monday’s meeting. Plummer also called for the removal of Molloy, Georgiou and Voss who, he said, “have made a colossal error in guidance that has left Cold Spring without authority over the size and density of the Butterfield development and disastrously exposed to legal action.” He urged the Village Board to “amend the B4A zoning to either redraw a smaller concept plan or … revise the language that describes the density.”

The Village Board took no action following comments from Barshov or residents regarding the Planning Board and the Butterfield project.

In a related issue, the law firm of Wormser, Kiely, Galef & Jacobs closed its White Plains office earlier this month. Georgiou has been an associate in that office. An article in StreetInsider.com, dated Oct. 14, confirmed that the Wormser-Kiely will maintain its New York City office and that Georgiou and three former partners in the firm are establishing a municipal law and land-use planning practice at the White Plains firm of McCarthy-Fingar.

When resident Kathleen Foley asked what impact that might have, Hawkins said she believes the village contract was being transferred to McCarthy-Fingar and that Georgiou will continue in her role as legal counsel to the Planning Board — but that the Village Board should discuss the matter.

While Butterfield dominated the public comment period, the board did deal with a number of other issues beforehand, including appointing Trustee Bruce Campbell as liaison to the newly formed Code Update Committee. They also approved the new committee’s proposed officers and meeting schedule.

Village Attorney Michael Liguori submitted his resignation, effective Dec. 5. Liguori said he has been retained by a “very significant client,” describing it as an opportunity “too good to pass up.” He also cited his need to spend more time with his young family.

Village Accountant Ellen Mageean reported that pension contributions for village employees, including the police department, were some $23,000 less than expected. The surplus will be discussed at the next workshop, with part of the windfall likely going to upgrade the village government computer systems.

Mayor Ralph Falloon reported that officials at the U.S. Military Academy at West Point are considering using Cold Spring as the terminus for its ferry service that shuttles cadets to and from Metro-North trains. It currently operates between West Point and Garrison. Falloon also said that organizers were very pleased with a pilot program for residents of the West Point community that brought four ferryboat excursions to Cold Spring earlier this year.

Trustee Cathryn Fadde said the Parking Committee will soon remove a number of street signs not covered by the Village Code. Mayor Falloon commented that there will be a process for residents to request certain signs, such as “Children at Play” on village streets.

Trustee Bowman reported that he has viewed concept drawings for a new fire station to replace the aging building at the corner of Main and Church Streets. The plans will be presented to the Village Board before year-end.