‘It was a … moment outside of whatever the conflicts are in life — a magical moment.’

What would happen, I wonder, if the Armies suddenly and simultaneously went on strike and said some other method must be found of settling the dispute?
—Winston Churchill, 1914

As much as we wonder “Could this happen again?” about mankind’s grimmest moments, one can, with more optimism, apply that question to those rarer synergies, when something in the human-to-human spirit transcends the barriers imposed upon it through wars and other societal divisions. Such a moment occurred precisely 100 years ago, in December 1914, the first year of World War I, in what has come to be called the “Christmas Truce.” 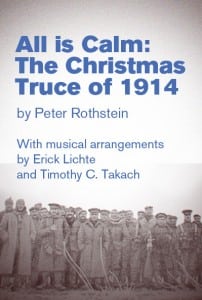 In the words of Peter Rothstein, whose musical theater piece about it, All Is Calm, will be performed in a Hudson Valley Shakespeare Festival (HVSF) production at St. Mary’s Church in Cold Spring on Dec. 12 and 13: “Thousands of men put down their guns and left their trenches to meet their enemies in No Man’s Land. They exchanged gifts of tobacco, rum and chocolates; even photographs of loved ones. They sang songs, played a game of soccer, and buried each other’s dead. Upon orders from above, they eventually returned to their trenches and re-instigated a war that would last four more years.”

Rothstein, the founding artistic director of Minneapolis’ Theater Latté Da, created the work in 2007 with musical arrangements by Erick Lichte and Timothy Takach, who were affiliated with Cantus, a professional all-male vocal chamber ensemble also based in Minneapolis. Rothstein was inspired while attending a Cantus Christmas concert where he was “struck by not only their remarkable sound, but also how their work was pushing the boundaries of chamber music in the ways Theater Latté Da was pushing the boundaries of musical theater.”

All Is Calm has proved very popular and in fact has not stopped touring since its inception; this production, unique in that it is mixing professional actors with local men’s choir members, is separate from the national tour, which is continuing into its eighth year.

Seizing upon the notion of radio as a guide, Rothstein and his colleagues fashioned their content as a form of “radio musical drama” using only the tools of radio: music, in the form of trench songs, sentimental and patriotic tunes of the day and Christmas carols from the participating countries. 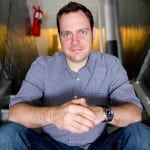 According to this production’s director, Moritz von Stuelpnagel, the text, which proceeds chronologically, is derived largely from correspondence of the period along with some first-hand journalism and interspersed occasionally with quotes from prominent ‘leaders’ of the day. “For the most part, they are ‘man on the ground’ journal entries, along with some poetry,” von Stuelpnagel said, noting that it “begins with the enlisted men going off to war — how the war was ‘sold’ to them versus what actually happened. Music was a part of their culture, a way for them to sustain themselves, and quite a bit is conveyed through the songs they were singing; the ‘war songs’ were particularly truthful.”

This is echoed by Garrison’s Michael McKee, one of 10 local male singers coming together as a newly formed a cappella group to perform all of the music together. “It’s a beautiful piece,” said McKee. “There are all of these wonderful letters from the soldiers, and the music is well-blended with the letters. It consists of songs popular at the time, which emerged from common experiences: saying upbeat goodbyes, sailing away from England, a metaphorical connection with home, and the somber return. We sing songs like ‘It’s A Long Way to Tipperary,’ ‘Pack Up Your Troubles in Your Old Kit Bag,’ and then it turns darker, with ‘Hanging on the Old Barbed Wire,’ ‘I Want to Go Home’ and ‘Keep the Home Fires Burning.’ These are interspersed with old German marching songs and Christmas carols from England, Germany and France — we sing ‘O Christmas Tree’ in French.”

McKee came to the project through Davis McCallum, HVSF’s recently appointed artistic director. McCallum heard McKee, a member of the St. Philip’s church choir, sing a solo there, and asked him to participate and for advice on rounding up other singers and a music director.

Garrison’s Paul Heckert, who holds a master’s degree from the New England Conservatory of Music and is minister of music at St. John’s Episcopal Church in Cornwall, was appointed as music director. McKee and his fellow singers, consisting of four tenors, three baritones and three basses, all from this area, will be fusing their work with three HSVF professional actors, Sean McNall, who is also serving as the festival’s new associate artistic director and director of education; Ryan Quinn, who has appeared at the festival frequently; and, new to the festival, Matt Bittner.

Currently divided into two separate rehearsal groups, with the chorus working together in Philipstown and von Stuelpnagel working with the actors in the city, they will come together in a series of joint rehearsals just prior to the performance dates.

The actors will be essaying many roles and, with those roles, nationalities: French, German, Irish, English and Scottish. “The actors are already hard at work learning the accents,” von Stuelpnagel said, adding that the narrative requires a certain kind of “virtuousity of performance.” 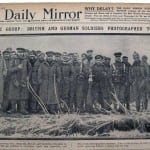 Von Stuelpnagel sees this production as “especially poignant, as it is taking place during the 100th anniversary of this major event, when both sides laid down their arms … It was a miraculous event, a large feat of humanity and a testimony to the spirit of Christmas and the holidays in general, not just Christmas itself — a moment outside of whatever the conflicts are in life — a magical moment.”

Von Stuelpnagel has “full confidence that these performances will be magical, too, for history fans and others. It’s a riveting story and then coupled with that music, in the beautiful St. Mary’s space — it’s going to be transporting.”

All Is Calm will be performed at 7 p.m. on Friday, Dec. 12, and at 2 and 7 p.m. on Saturday, Dec. 13. Tickets, which have been selling quickly, cost $40 and can be reserved through the HVSF website, hvshakespeare.org.