Empty podium will serve as tribute to Gordon Stewart

Any one of the approximately 600 people who attended last December’s performances of George Frideric Handel’s Messiah at Cold Spring’s St. Mary-in-the-Highlands Episcopal Church could have attested to the very special alchemy of those two productions, in which a contingent of New York’s finest Messiah-seasoned musicians were joined with a chorus partially drawn from local singers, and led by conductor Gordon Stewart in bringing the famous oratorio to an extended, and awe-struck, swath of the community. 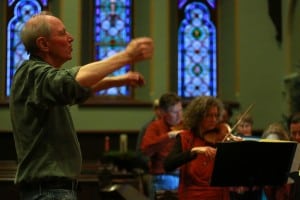 Gordon Stewart conducting a rehearsal in 2013

In response to multiple requests — from those who attended and from the musicians and singers who played and sang — Messiah, with most of the same personnel, will return to St. Mary’s for two more performances, at 2 and 5 p.m. on Dec. 21.

Stewart, who founded Philipstown.info and The Paper, died on Nov. 26. Hopeful of conducting again, yet aware that his illness might prevent this, Stewart arranged for the performances to be given regardless of his ability to be there, and specified that he wished for “an empty podium” to represent him, should he be absent. His request will be honored, and the performances are now dedicated to his memory.

A reception with refreshments will take place in St. Mary’s Parish Hall in between performances. Garrison’s Rachel Evans, who assembled the musicians, will again serve as concert master, leading 21 musicians, four soloist singers and a chorus of nearly two dozen through Handel’s baroque composition, long a staple of the December holiday season. As they did last year, proceeds from the concerts will go directly to the Philipstown Food Pantry and to St. Mary’s.

Last year, in speaking of the work, Stewart called every Messiah “a unique site-specific work. Handel himself prepared and conducted four separate productions with multiple performances of each. The performances in our own community will be carrying on traditions of love for the often soaring and sometimes searing solo and choral movements that have long endured in communities from the coal mining cities of England, to mass sing-alongs in vast halls, to rarefied reconstructions of one of Handel’s original performances. Purists might say ‘survived’ is more like it. But for all its historic authenticity, this unique 75-minute production also embraces the affection felt by so many millions over so many years for moments they know by heart.” 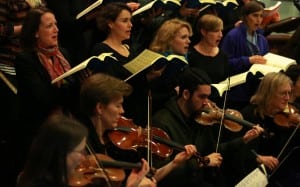 Messiah was acknowledged by many as a transcendent experience last year and the question inevitably raised is “Why take the risk of repeating it and not achieving the same result?” In a discussion shortly before his death, Stewart succinctly stated, “It starts with the musicians; they wanted to do it.”

Though initially resistant to bringing it back, as “last year had a special dimension to it — it was the first time that 600 people, nearly 10 percent of the adult population of Philipstown, came together at one time, for one purpose,” Stewart changed his mind. “Musicians who love this music want to play it and can play it, and people want to hear it yet cannot play it themselves, and that’s the reason for these concerts. Last year’s performances seemed to very much appeal to the highest level of professionals, largely because they could feel they were playing directly to people who wanted, and needed, to hear this.”

Once again, these performances will hew close to Handel’s original presentations in terms of the size of the company of players. Among the special features will be the use of replicas of 18th-century period instruments by the musicians. “The instruments give the music a plangent, softer sound, a fractional tone lower than we are used to,” Stewart explained last year.

Bassoonist Clay Zeller Thomson found his performance in Cold Spring last year to be “one of the most memorable concerts I’ve played in a long time.” In comments made immediately prior to Stewart’s death, Zeller Thomson said: “

There was this feeling that this Messiah might actually mean something. I know a lot of it had to do with Gordon. I often play under conductors who go through the motions and basically throw something together (especially a work so famous as Messiah) … but this was different. I was playing under a passionate musician who trusted the musicians he had gathered with everything. I felt valued. And while Gordon isn’t a professional conductor, it didn’t matter! It made it better, actually. He had a raw unbridled passion for every moment that he could not help but show to us. And that’s all a professional orchestra needs sometimes.

Stewart, reflecting on hearing the music anew just before his passing, said: “People who saw it last year will hear different things. I’m hearing it differently this time around … Handel was a theater composer and knew how to excite an audience. When he was going through difficult times, he had these inspirations, which meant a great deal to him. Trying to go inside his soul and find things for musicians of this caliber to be stimulated by is a rare opportunity to make this happen.” 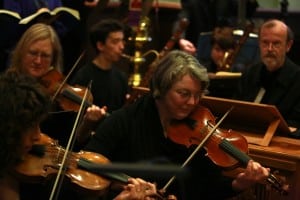 John Feeney, principal double bass of the Orchestra of St. Luke’s, commenting before Stewart’s death, said: “Gordon Stewart infuses Handel’s Messiah with his sense of community, humanity and civic responsibility. The universality of this music brings people together in a meaningful way that words can’t capture. The musicians are inspired by Gordon’s sense of purpose and the whole performance is a shared, creative experiment that is unique and important to all who are present — audience and performers alike.”

Stewart, two days before he died, described his own relationship to the music: “It comes together and lifts off — you can feel it. It all starts from inside, just as it did with the man who wrote it, and what you feel and understand inside determines how your heart beats. That prepares you in advance how to share with the players. All that happens before a note is heard.”

Tickets for Messiah can be purchased at brownpapertickets.com.

One thought on “Messiah Concert to Go On”