Hot on the heels of Beacon’s new butcher shop, Barb’s Butchery, profiled on these pages just last month (Nov. 21), comes word of a second store, also designed to keep carnivores happy, this one in Philipstown. Marbled Meat Shop (MMS) has just opened, immediately south of the Cold Spring Coffee Pantry, both part of the complex in Vera’s Philipstown Market. MMS was formerly On the Fly Cycling Studio, which relocated in November just a bit farther up Route 9. 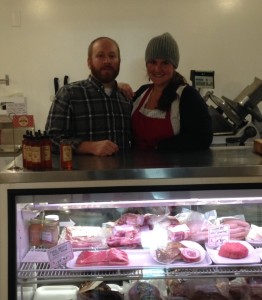 Chris Pascarella and Lisa Hall have opened MMS on Route 9

The coincidences of the two new meat-eries don’t end there — both have women as their catalysts, and both women are new to the trade, have come to it purposefully, with a desire to provide the public with meat from farms with particular growing practices and both turned to it following years as high school teachers — food for thought, perhaps.

Lisa Hall is at the helm of MMS, along with her husband, Chris Pascarella. They are newly arrived, having lived in Philipstown since just last May. In Brooklyn, where they lived formerly, Hall and Pascarella worked in their professions — she, teaching history at a public high school there, he, a graduate of the School of Visual Arts, a 3-D animator — and spent eight years as organizers of a meat share, a collective wherein orders were placed with a farm in Pine Plains, for, say, half a steer or a whole hog, and the butchered animal was delivered to them and split evenly among the members. The meat share also organized barbeques, recipe exchanges and other meat-related activities.

After giving birth to their son in June 2013, they both felt constrained by their one-bedroom apartment. More or less on a whim, Hall started looking beyond the city, having always had a yen to return to the Hudson Valley, where she had spent many years, including four attending SUNY New Paltz. Together they had visited Cold Spring and Beacon many times and determined that the area was perfect in terms of the “How far can we go and still be able to commute?” equation.

The counter at MMS

Hall found a house online and, in very quick succession — they saw the house on a Monday, made an offer two days later and closed on it two months after that — transplanted to Cold Spring, where, crazily enough, Pascarella’s commute is only 20 minutes longer than the multi-subway-line journey he took from the outer reaches of Brooklyn to his Manhattan office. Hall joked that it took “only an hour to convince Chris it was time.”

During their visits to Cold Spring, Hall and Pascarella often hung out at the Cold Spring Coffee Pantry, which is close to their new home. They tried out the new beers and got snacks from Vera’s. After they moved in, Vera gave them a hanging plant and a dozen doughnuts as housewarming gifts. Meanwhile, Chris, a home-brewing aficionado, had spotted an ad seeking an experienced home brewer. Checking it out, he discovered it was the Pantry. All seemed to be coalescing when the “We need a meat shop here too” cry was heard, and Hall and Pascarella, with their background in meat, decided that they would jump in and fill that need.

While Hall is in training, learning butchery skills, MMS is “not a full-service butchery yet, but it will be by spring,” Hall explained. What they are now offering is selected cuts from a whole animal, raised on a local, USDA-approved farm, grass-fed with grain supplements, with no pesticides, antibiotics or growth hormones used. Each animal, which has been processed right there at the farm, “has never traveled, never been distressed,” said Hall. The cuts are flash frozen, with all delivered immediately to MMS, and “the quality of the meat is not compromised by it being flash frozen,” according to Hall. 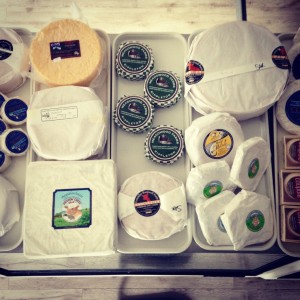 Some of the cheeses available

In addition, MMS is ordering specific cuts of 100 percent grass-fed meat, on request, from Finger Lakes Farms, a cooperative located in the Finger Lakes region. Not just pork and beef, the range includes specialized items such as rabbit and goose. Generally, orders are sent in on Monday afternoons, and deliveries are made a couple of days later, ready for pickup Wednesday through the weekend. Hall advised that currently it is best to email orders, saying, “We can get almost anything and can give prices before ordering.”

On their first weekend open, MMS did very well; only three steaks remained at closing Sunday.

In the spring, there will be much more fresh meat on offer, and special requests will be accommodated, down to very specific cuts including “a specific part of a specific muscle,” Hall said. There will also be a walk-in cooler outside the shop, for people to choose from.

On hand now, and growing as well, is a cheese case, filled with selections from Saxelby Cheesemongers of Red Hook, Brooklyn, which specializes in farmstead, American-made cheese. Along with the cheese are small-batch farm salumi products as well as condiments, including mustards, Mike’s hot honey, spice rubs and a hot sauce made in Ghent, New York. As with the meats, this line will expand over the next few months.

MMS is located on Route 9 in Cold Spring

Hall said it’s “been really fun talking with like-minded local ‘makers.’” She and Pascarella, in turn, hope to engage with the community over time, with classes and other activities. Calling upon her background as a teacher, Hall would “love to do some educational programs in the future. I already miss teaching and one of my favorite things that I did as a teacher was taking my kids on a field trip to a butcher in Red Hook, part of knowing where things come from. That’s important to me, and I hope to work with local schools and others here who feel the same way.”

One thought on “Marbled Meat Shop Launches in Cold Spring”