Few people know how to make an entrance like Santa Claus.

That was evident in Beacon last Saturday night, when the man in red arrived at the park on the corner of Main Street and Route 9D for the city’s fourth annual tree lighting.

Delayed by Second Saturday traffic, Mr. Claus rolled down Main Street in a pedicab pedaled by Jon Miles of the Peoples Bicycle shop. With the Grinch by his side, looking suspiciously like Beacon City Council Member Ali T. Muhammad under the mask, sculptor Ed Benavente playing the role of the reindeer on a golden bike of his own, and a full police escort, Santa arrived to cheering kids of all ages. 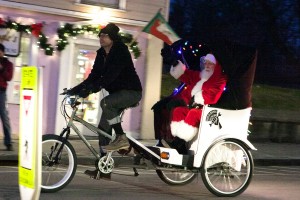 The mood had been set long before Santa arrived, with music and dancing provided by the Beacon Music Factory, the Center for Creative Education and local elementary school students. The WeePlay Community Project held an ornament-making workshop for children to make their own decorations for the tree. And the tree was, of course, no ordinary tree. As with the previous three years, the tree was actually a sculpture constructed by Benavente out of old bicycle parts.

“It gets a little bit bigger every year,” said Benavente about this handiwork. “My plan is always to build it in the middle of the summer when I can still feel my fingers, but somehow it always comes down to the week before.”

This was the first year that the lighting was held at the pocket park on the corner of Main Street and Route 9D. The lot at Cross Street and Main, the event’s previous location, was recently sold. While the new landlord offered to let the event continue at Cross Street, Dan Rigney, president of BeaconArts, said it was better to come up with a new permanent site for the event. The pocket park, home of the Beacon Welcome Center, has slowly been transforming into the sort of public square the city sorely lacks. 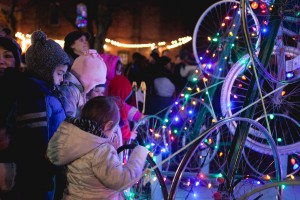 An up-close examination of the bicycle tree by Beacon kids

Rigney said that having the tree lighting there would help further develop the location. “It’s a site that’s controlled by the city, and the visibility of the park to those driving back and forth on Route 9D is fantastic,” he said. “It’s a public space that needs to be developed a little bit more, as it welcomes a lot of people to Beacon, and this is going to help set this park in people’s minds.”

The spirit of excitement continued to develop as Santa strolled to the porch in front of the Beacon Welcome Center and led the crowd in a countdown to lighting the tree. Santa’s flair for the dramatic was evidenced once again by the fact that the tree failed to light on the first two tries. But the third time was the charm, and the tree burst to life with multicolored lights, spinning wheels and a rotating disco ball at the top that cast stars across the faces of awed children at the foot of the tree.

Benavente said it’s no wonder the children find the tree so entrancing. “When you talk about Christmas, for a lot of kids a bike is the best gift you could ever get, because it’s your first taste of freedom,” he explained. “You’re self-propelled. So when Beacon was lacking its own tree ceremony, I thought, ‘Why not make it an art project, something symbolic of the town?’ Like Beacon, a bicycle is powered by people. And besides,” he added, gesturing grandly to the illuminated tree towering above the park, “who doesn’t like a bicycle?”