Disturbing trends, cause for optimism

An audience of approximately 50, mostly parents of teens, recently received the latest data on the use of drugs and alcohol by young people in the Haldane School District. The report, sponsored by the Putnam County Communities That Care Coalition, a group committed to preventing underage drinking and drug abuse, offered cause for varying degrees of optimism, concern and worry, depending on one’s perspective. 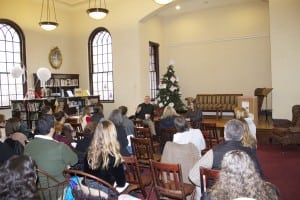 Held at the Butterfield Library on Friday morning, Dec. 19, the presentation, organized by the Haldane PTA, took attendees through a printed PowerPoint display of statistics measuring categories of drug and alcohol use across age groups from eighth to 12th grade. For most categories, comparisons were made going back to 2008 in two-year increments. The presentation was described as an executive summary of the larger study.

Alcohol consumption, including binge drinking, showed a continued if relatively small decline among teens since 2008. Sixty-seven percent of 12th graders indicated they had used alcohol in the past 30 days in 2014. There was also a marked decline in the last two years in students acknowledging having driven a car while intoxicated or having been in a car with an intoxicated driver.

“The longer you delay drinking, the less likely you are to see alcohol problems later in life,” said one of the presenters, Joseph DeMarzo, deputy commissioner of the Putnam County Department of Mental Health, Social Services and Youth Bureau.

DeMarzo said binge drinking (four to five drinks in an hour) was a particularly worrisome problem that resulted in part because of teens’ awareness that possession of alcohol is a criminal offense, while having consumed it is not, unless another infraction is committed. Forty percent of 12th graders admitted to binge drinking. However, he said the study offered reason to be optimistic given the overall decline across grades from 31 percent in 2008 to 17.6 percent in 2014.

Conversely, marijuana use has steadily increased, as measured by teens admitting use within the last 30 days when taking the confidential survey. Most striking to DeMarzo was an uptick in eighth-graders, from 2 percent to 6.8 percent, acknowledging usage within a 30-day period. He said it was a possible warning sign of things to come.

“Not everyone who smokes marijuana is an addict, but every addict has smoked marijuana,” said DeMarzo, who together with co-presenter Kirstin McConnell, executive director of the Putnam National Council on Alcoholism and Other Drug Dependencies, expressed concern about a more generally permissive national attitude toward marijuana, particularly in allowing its application for medical treatment.

They pointed to the survey’s measurement of the perception of risk and noted that with respect to marijuana it has dropped from 75 percent in 2008 to 46.5 percent in 2014.

“The kids know you’re not going to get arrested. It’s a $150 fine in Putnam,” said DeMarzo during a discussion of how teens assess the risk of various behaviors. He described New York City as the “Wild West” when it came to marijuana use.

DeMarzo, who acknowledged he was speaking beyond the parameters of the survey presentation, characterized marijuana as appropriate for about 3 percent of medical sufferers even though it is often cited for a wider scope of treatment.

DeMarzo also acknowledged there is debate in the treatment and clinical fields as to whether early exposure to alcohol, tobacco and marijuana established a “gateway” to harder drugs including heroin. He said his experience, which includes overseeing and partici   pating in county treatment programs, had convinced him that was the case.

The survey also asked about heroin use, and while the number is quite small relative to other uses, at 1 percent across grades eight through 12, DeMarzo nevertheless characterized it as “frightening,” citing heroin’s addictive and damaging effects. “It’s a lifelong addiction that kills in minutes.”

He stressed that the temptation of heroin begins with exposure to opiates found in the home medicine cabinet. He suggested parents inventory pain medicine and secure or discard it appropriately.

DeMarzo said that heroin use is more likely to be seen in ages 19 through 42, as people on opiates move to heroin given the increasing restrictions and expense of prescription drugs. He said heroin dealers were effective in marketing heroin, mixing it with other drugs and emphasizing its price advantage.

McConnell described the administration of the awkwardly titled 2014 Prevention Needs Survey, underscoring that it is designed to obtain reliable results. Through encouragement by teachers and a passive consent process (meaning a parent can opt a child out rather than a requirement to opt in), 318 of 363 Haldane students completed the survey with its 119 questions last spring. Students were assured that the survey was voluntary, anonymous and confidential.

McConnell said the survey tested for validity. A number of completed surveys were eliminated from consideration after a determination that respondents were in some way inconsistent or dishonest in their answers. For example, responses by students claiming use of a fictional drug were thrown out.

The survey is both funded and approved by the federal government and involves the use of evaluators from outside Putnam County, explained McConnell. Across the county, four of the five school districts were surveyed. Comparison of districts is not part of the study.

While the report was presented under the auspices of the school district’s PTA, and Haldane Superintendent Diana Bowers was in attendance, the presenters emphasized the parental and overall community role in determining cultural attitudes toward drug and alcohol use. DeMarzo stressed that while schools “are a big part of the community” with education and awareness the first step in addressing these issues, “they are not the community.”

Other institutions and organizations, religious, sports, civic, right down to the neighborhood deli and pizza parlor all play a part in influencing values and behavior. “Schools get the bad rap for what goes on in the community,” said DeMarzo. “Community is how we change culture.”

Ultimately it is the parental role that remains central to determining attitudes toward usage. The survey reported that while teens generally see parental disapproval of alcohol and tobacco (97 percent), “two out of 10 parents think marijuana use is OK,” said DeMarzo.

He also said the survey indicated only 20 percent of students were prepared to call their parents if they were involved in a difficult situation involving drugs or alcohol. “We need to have a community discussion about what that means,” DeMarzo said.

He said parents needed to appreciate the value of making it easier for kids to feel they can call at anytime for whatever reason and not experience lasting consequences. He also said parents should look for ways to better include and reward teens in family life, such as asking them where to go for vacation.

Afterward, Bowers said there would be another opportunity for parents to hear the results in an evening session and that she would look for other ways to continue the conversation.