The Hudson Highlands is fortunate to abound with birds, quite a few of that are hardy enough to stay put over the winter. Nature’s food for these birds can be tough for them to find, particularly during severe stretches of weather, and that’s when people can give and get: By feeding these birds via a bird feeder, they give the birds additional sustenance and a regular source of food, and they get wonderful views of the birds through their windows, plus opportunities to learn more about them through observation. 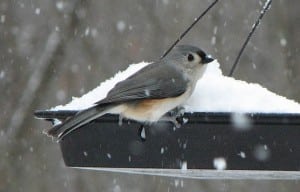 That’s just what started Scott Silver, the speaker at Putnam Highlands Audubon Society’s (PHAS) recent presentation on the topic, on the path to a lifelong interest in birds. Silver, a Garrison resident who is director and curator of animals at the Wildlife Conservation Society’s Queens Zoo as well as a PHAS board member, noted at the start of his talk that it all began for him with a bird feeder:

I was always interested in animals, but a friend of mine gave me a feeder as a teenager; I put it outside my kitchen. It starts out with a couple of birds coming to the feeder. You begin to realize they’re different. Some look the same, but a little different — this means males, females — some go for seeds, some suet, and they change over time. For example, I started out in February with winter birds … It all started with looking out the window. It’s easy to do and not an expensive hobby. Now I wake up at 4 a.m. to go someplace to look for them and I go on crazy vacations just to see them.

Silver went on to describe the initial equipment needed, which is quite straightforward: “You need a bird guide, binoculars, a place to set up a feeder, and seed; that’s it.”

PHAS’ Connie Mayer-Bakall, who also spoke at the event, said, “You find certain birds are the first ones to discover the feeders.” Silver agreed: “Chickadees are one of the most inquisitive and least timid.” 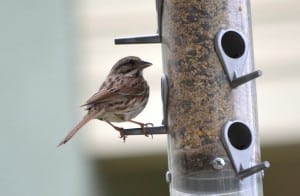 Mayer-Bakall starts feeding in October and continues through the breeding season. This year a bear came to her feeders and knocked them all over, but, undaunted, she began again. “Now I put them out in the a.m. and take them in at night. Hopefully the bears are in their dens now, but you have to watch out for squirrels, and raccoons.”

To avoid constant squirrel consumption of bird food, Mayer-Bakall has set up a pulley system with her feeders. Silver said, of the many feeder models that attempt, not always successfully, to deter squirrels from getting to the food: “You need to think of it as enrichment activities for squirrels.” To deter dogs, squirrels, raccoons and other creatures from eating birdseed, sprinkling cayenne pepper near the base of feeders was recommended.

In terms of feeders themselves, although there are many on the market, they need not be grandiose in order to be effective. In fact, Silver said, it’s easy to make one yourself, or do something as simple as taking a piece of strong wire or fishing line, tying it around a tree and pressing suet into a “cake” and inserting the suet cake into it. (The suet attracts different birds than seed does, and is particularly attractive to woodpeckers.) Or put the suet, protected by a suet cage, into a basket and hang the basket from a branch. 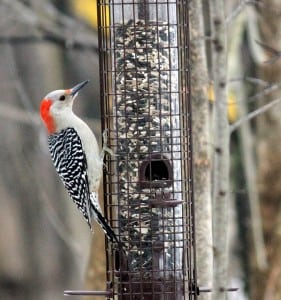 Alternatively, buy a small plastic feeder and plan on spending about $17 for a 20-pound bag of seed, which should last for about a month. Silver noted that birds feed differently: “Some like to grab onto a perch, while others are ground feeders.” These include crows, which Silver described as “fun. They arrive in the a.m. with a great hullabaloo. They always have a sentry watching out, and then they switch sentries.”

In terms of birds of prey swooping down where feeders are clustered, and feeding on those doing the feeding, Silver suggested, when possible, placing the feeders partly under cover, to help with avoiding detection. For ground feeders it’s the opposite — keep the feeding area away from bushes and hedges where cats and other mammals may lurk and pounce. 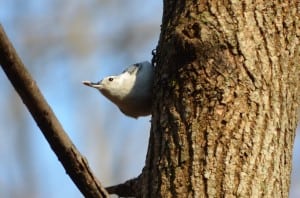 Having a birdfeeder and being able to enjoy the observation of birds alters the way one sees them, said Silver, who has found that with birds and all wildlife, “When you begin to recognize individuals, you become more committed to them. For example I had a song sparrow with a broken leg that I kept watching. I watched it for three years and really missed it the year that it didn’t return.”

In terms of what to stock the feeders with, dependent on the species, what’s most important, according to Mayer-Bakall, is that it be “not grain-filled — that’s what you’re looking for.” Common feeds include millet, sunflower seeds, sunflower hearts for those with domestic animals who don’t want the scattered shells underneath, and safflower seeds. Locally, places like Blue Seal and Adams stock many varieties. 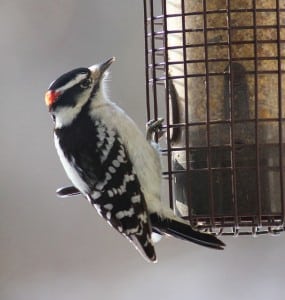 In considering where to place a feeder, Silver suggested somewhere you can easily get to, for frequent restocking and cleaning — bacteria grows easily in them, becoming a risk for birds. The top exteriors and feeding platforms should be wiped down every one to two weeks with a solution made up of a tiny bit of bleach combined in a bucket with lots of water. In addition, one or two times a year the underneath of the feeder should be wiped down as well. Many people affix feeders to moveable poles, which can also be set up with two different feeds — seeds in one and suet in the other — which then brings a great diversity of species.

Silver reminded everyone not to forget that natural plantings are great for feeding. Trumpet vines attract hummingbirds, for example, and you can watch the birds forage. Finally, he added, birds need water, and if you are not located near a stream or other water source, consider obtaining a heated water birdbath. Most models turn off if the water in the bath dries up. 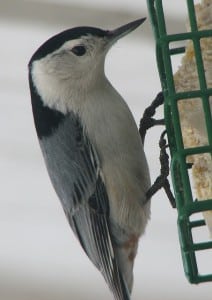 The PHAS will have their next biannual bird sale at the Taconic Outdoor Education Center on Jan. 10 from 1 to 3 p.m. The sale will be accompanied by a chili fest and a presentation on rattlesnakes by Ed McGowan, science director for the Palisades Interstate Park Commission. He is expected to have live snakes with him as part of his program.

Other PHAS activities include the Christmas Bird Count and spring bird hunt. For details on these and other PHAS programs, including one usually held in May designed as an introduction to bird watching for novices, visit putnamhighlandsaudubon.org and ask to be put on the email list. There is also a Facebook page.

One thought on “Feeding and Caring for Over-wintering Birds”