For the longest time they’ve been sitting there in my refrigerator like some Food Network cooking show challenge: preserved lemons.

I don’t even remember when they appeared. Yet as with other small, good things, when the time was right and the cosmic forces of hunger and boredom aligned, they seemed to be just the magic bullet to blast my way out of the cold, monochromatic turn a specific winter night seemed to be taking.

A handful of tender young arugula and some surprising pea shoots found at the Cold Spring Farmers’ Market formed the bed of a salad. Next came some mandoline-shaved fennel and red onion, and ultimately the boquerones (Spanish oil-cured white anchovies) I’d splurged on at the Beacon Pantry became the focus.

My standard vinaigrette would have been fine, but for some reason that bright jar of lemons and the suggestion of unexpected spice from the red pepper and cinnamon stick lurking therein sent me a-Googling.

Sure enough: Preserved Lemon Vinaigrette — a tablespoon or so of the minced rind and pith of these cured lemons (this is the useful part — the pulpy flesh is discarded), some minced shallot, a splash of the curing liquid and another of red wine vinegar, whisked with olive oil and (for me) just the barest drizzle of honey — a simple but surprisingly well-tailored sauce that was the perfect dressing for the ingredients on hand. The cured fish and licorice-accented fennel merged and were brightened by the lemon, and coupled with the crisp bitterness of the arugula and vernal sweetness of pea shoots, it meant my fellow diners and I were transported to some warmer, more luxuriant place.

Meanwhile, back in Cold Spring, a trusted friend and advisor has of late admonished me to try to be more mindful in this column of our particular terroir, and admittedly none of this is particularly Hudson-Valley seasonal: It’s perhaps a bit more loco than locavore. Or maybe this culinary conceit is strictly a justification and desperate attempt to stave off mid-winter cabin fever with some food-powered space-and-time travel. Seriously, I’m not just talking about preserved citrus fruits here — I’m also trying to preserve some semblance of sanity and civility until spring rolls around again. 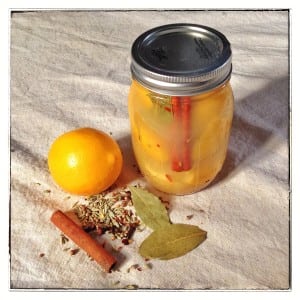 Preserved lemon, or lemon pickle (pickle, from the Dutch pekel, meaning brine) is a condiment known throughout the world in which these “country lemons” or leems, as they are known in Morocco, are cured in a salt and lemon juice brine at room temperature for as little as a two weeks before use.

The spices most often used — cinnamon, peppers, cloves, bay leaves — add exotic flavors, to be sure, but were primarily adopted for their anti-bacterial and preserving properties. This was first and foremost a simple, practical and affordable method for putting up a useful ingredient far beyond its season and far away from where it is usually grown.

That said there is also a certain seasonal and possibly local market logic to this madness as well: Further research revealed that the best preserved lemons are made from the thinner-skinned and relatively “sweeter” Meyer lemons, a cross between the common lemon and either the mandarin or common orange. These are primarily winter-harvested (January-February) and can be indoors/container grown, another reason why it’s not uncommon to receive a few as gifts around the holidays.

They are also a very flexible ingredient-cum-seasoning used not only in the aforementioned Moroccan tagines but also Asian and Indian cooking in dishes like ngam nguv (a Cambodian chicken soup with whole preserved lemons) or paired with olives, artichokes, chickpeas, ricotta, yogurt or rice in varying combinations. Preserved lemons have a particular affinity for seafood but also pair well with veal or lamb.

Modern chefs such as Alice Waters and Paula Wolfert (who may be the source of our contemporary fascination with preserved lemons) or cutting-edge culinary stars like Yotam Ottolenghi (and his partner Sami Tamimi) suggest preserved limes and other citrus fruits as options, and season theirs with the traditional spices mentioned above but have also expanded the palette to include rosemary and other herbs, or even vanilla.

Meanwhile, back in our farmers market, preserved lemon vinaigrettes and other dressings can brighten local winter and vegetables, especially the brassicas or leeks. A splash of the pickling brine is even suggested for your brunch-time bloody Mary.

So this week, rather than a “meal” recipe, I’m opting for an ingredient recipe, challenging you — us — to make our own batch of small good things and in a month or so to prepare something special with them.

Adapted from Couscous and Other Good Food From Morocco, by Paula Wolfert (Harper and Row, 1973); makes about 1 ½ cups

Sterilize the jar by steaming upside-down for 10 minutes. Sterilize the top by boiling in water to-cover for 5 minutes. Dry jar and lid in a low (200 degree) oven on a paper-towel-lined cookie sheet. When dry, place one tablespoon of salt in the bottom of the jar.

With a mortar and pestle, crush the spice seeds, peppercorns, pepper flakes and a tablespoon of the salt

Cut and discard about ½ inch of the stem ends of three lemons and quarter them lengthwise to about ½ inch of the other end without completely separating the quarters. Remove as many of the seeds as possible. In a shallow bowl, liberally salt the inside of the lemons.

Roughly reshape the lemons into “wholes” and place them — one at a time — into the Mason jar. Sprinkle a third of the spice mixture over each lemon before adding the next. Smash final lemon in with the pestle before sprinkling with the last of the spice mixture. Tuck in the cinnamon stick and bay leaves.

Juice the remaining lemons one at a time, straining the juice into the jar until the lemons are completely covered and the jar is topped off. Screw the lid on tightly and give the jar a good shake.

Store it in a warm place and give it a healthy shake once a day for 30 days to evenly distribute the spices and brine. When ripe, to use remove lemons as needed, rinse free of the brine and scrape free of the pulp before incorporating into your recipe. (I find that two quarters is about enough — one tablespoon minced — for a vinaigrette.)

If you’re careful about using clean utensils to remove the lemons and keep the remaining pieces covered with brine, there is no need to refrigerate the jar. Preserved lemons will reportedly keep for up to a year, and the pickling brine can be used two or three times.

* Note: Standard (i.e., non-Meyer) lemons can be used, but as they have thicker skins and pith, you may want to soften them somewhat by simmering them whole for 10 to 15 minutes and letting them cool before processing.