As difficult as it is to imagine now, in the icy depths of January, summer will be here soon enough. When it does, Putnam and Southern Dutchess county residents will take to local swimming holes, creeks, lakes, ponds and even the Hudson River itself to cool off. But while our region may be flush with waterways, it lacks the traditional outdoor municipal pool that for many people is a defining characteristic of summer suburban living.

Mark Price, Beacon’s recreation director, is hoping to change that.

This summer, after a few years of fits and starts, on June 27 the City of Beacon will finally reopen the public pool located at the old University Settlement Camp off of Route 9D. Originally built in the 1930s, the pool served as the backbone of the summer camp run by the University Settlement House in Manhattan for over 70 years.

The city took over the camp in 2008, and the pool was opened to the public. But finding the right schedule that allowed ample time for both the public and day camps to use the pool proved tricky, and the aesthetics of the site were somewhat problematic.

“The budget was lacking, so there wasn’t much to do there besides jump in the pool,” recalls Price. “We didn’t have that whole ‘Let’s linger here all day and have lunch’ vibe. The pool itself was crystal clear, well run, and we had a great staff. But it all comes down to that atmosphere.” The wet, unseasonably cool weather did them no favors in 2008; residents with good memories will recall that summer as the one where the local climate resembled the Scottish Highlands more than the Hudson Highlands.

This year, with the budget restored, locals can expect the pool to be open a minimum of six days a week. And it’s not just Beaconites who get to cool off; the pool is open to the public at large as well.

Pool passes are now on sale, but mainly as a way to gauge the public’s interest in the pool as opposed to raising funds. Family passes currently go for $80 and are set to increase to $100 on March 1. Price is hoping to sell at least 100 passes before the season begins. As of press time he’s up to 15 — pretty good when you consider that nobody thinks about buying a pool pass in January. Those interested in purchasing a season pass can download an order form and get more information at beaconny.gov. 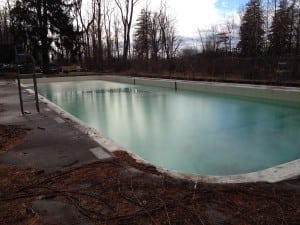 The Beacon Pool in winter awaits a spring thaw and cleanup. (Photo by Mark Price)

The pool itself is almost Olympic-sized: 140 feet by 50 feet and progresses in depth from 2 feet to 8 feet. The pool was drained, thoroughly cleaned and refilled in the fall without a hitch. “Operationally, the pool is still in great shape,” said Price. “The challenge for us is still to make it into someplace that people want to hang out. We’ve got a lot of work to do. It’s not exactly a turnkey country club.”

Initial plans call for a grove of picnic tables nearby and lounge chairs by the pool itself. Price doubts that the city will have the capacity for a municipal snack bar this season, so he’s hoping some of the local food trucks and eateries will be interested in coming by on the weekends. A surf rock pool party, put on by the Beacon Music Factory’s Hobo Concert Series, is being planned. Price said that if enough people utilize the pool this summer, it will allow the city to continue adding events and amenities the following year.

It’s a plan that has worked well for the settlement camp as a whole. When the city took over the camp, they determined that the only way to fully rehabilitate the site was with community partners. “We’ve been able to build relationships that have put some stewards in place without taking away from the fact that it’s a public park,” said Price. Clearwater took over one of the buildings on campus for their headquarters and renovated it. The Beacon Independent Film Festival established the camp as their main viewing site. Volunteers built Beacon Glades, an official 18-hole disc golf course, from scratch. And the theater building, which used to host three or four events a year, is completely booked for next season with weddings and other events.

“That’s not through advertising or billboards,” said Price. “It’s just folks being up there and saying, ‘Tell Jimmy that he should have his wedding here.’”

Intrepid hikers who are handy with a map probably already know about the unmarked trail that leads from the camp up onto Mount Beacon. Price is working to have this open secret of a trail marked and brought into the official New York–New Jersey Trail Conference system. “Instead of being stuck down at the main Mount Beacon trailhead parking lot with 600 other cars, there’s this whole other fantastic way up the mountain that’s way more accessible for kids and older folks than scrambling up the face of the mountain on the main route.”

All of these features led the community to accept and invest in the camp in a way that it hadn’t when the pool was last open seven years ago. Price is optimistic that the renewed appreciation of this unique park will help the Beacon Pool become an annual occurrence. But there’s one thing about the camp that won’t change.

“In the summer, when you’re standing in that open field, it’s hard to believe that you’re actually within city limits,” said Price. “There are some more creative reuses for the property in the works, but no matter what it’ll always be that big green park up against the mountain.”

2 thoughts on “Beacon Pool to Reopen to Public”