Local veterans made up the majority of the crowd at the Haldane School District Board of Education meeting on Feb. 3. The issue that brought about 15 men out on a cold night was a public hearing on the Alternative Veterans’ Tax Exemption, which would cut taxes for those who served and shift some of the tax burden for the district onto other taxpayers.

The hearing was an open forum for community members to share their opinions on the issue. Only veterans spoke at the microphone during the meeting and no one spoke against it. 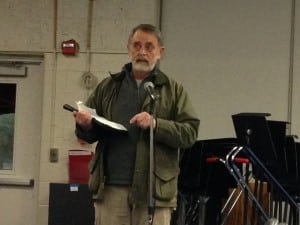 Vietnam veteran Dave Marion spoke in favor of the tax exemption and also did his own research into the impact on taxpayers.

Dan Dillon, Haldane graduate, Cold Spring resident and a Vietnam War veteran, said: “Personally I would like to see the board approve the exemption. I know it may be hard to do, but I wouldn’t look at it as a dollar figure. I would look at it as a thank you or recognition for the many veterans in our school district who proudly served our country, which allows us to have the community that we have today.” The audience clapped in response.

At their Jan. 23 meeting, all of the board members indicated they would support the exemption and wanted to hear feedback from constituents. The hearing was required by law before the board could act on a resolution putting the exemption in place, though.

At the conclusion of the hearing, Board President Joe Curto Jr. confirmed the other board members were still in favor of the exemption, then board member Evan Schwartz raised the issue of establishing a larger exemption for the veterans than the one proposed, identified in the presentation as the “Basic Maximum.”

As outlined by the state, there are multiple levels a district can grant veterans an exemption. The resolution the board was prepared to pass was at the lowest level. Schwartz argued that the board needed to revise its timeline in order to schedule a second public hearing on granting a higher exemption for veterans, which will shift more of the tax burden to nonveteran taxpayers and cut taxes more significantly for veterans.

Schwartz said: “I’d like to give the public a second chance to come back and comment if we should go above the basic (exemption). We haven’t heard anyone against the resolution at this hearing. I think we should pass the basic resolution as fast as possible and have a second public hearing. Honestly, I don’t think we should hide behind the timeline as far as not going to the maximum benefit.” 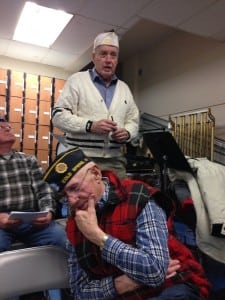 A veteran who asks the board a question about widowed spouses’ eligibility for the tax exemption.

Based on town records, there are currently about 200 exemptions for veterans that Philipstown recognizes. Using their information, Haldane Business Manager Anne Dinio estimated that shifting the tax burden from those veterans to nonveterans would cost Haldane District taxpayers approximately an additional $21 for an assessed value of $200,000 at the level the board was ready to approve.

Schwartz argued for an additional hearing to raise the tax cut to the maximum level. It would cost nonveteran taxpayers nearly $100 for a property with an assessed value of $200,000.

After public comment, the board will vote on whether to adopt a new resolution granting the veterans a larger exemption from taxes. The presentation is available on the school’s website, haldaneschool.org.

Based on Gov. Andrew Cuomo’s State of the State address and his Executive Proposal for the budget, Business Manager Anne Dinio was not optimistic that there would be an influx of new state aid for schools.

Dinio said: “The proposal includes an increase of 4.8 percent over 2014–15 levels that is contingent upon the legislature adopting the governor’s education reform proposal. The state budget would include an additional 1.7 percent increase in state aid to school districts, and that’s statewide; Haldane usually gets less than that. We won’t get final numbers until April 1, and the recommendation is that we budget at a 0 percent increase as far as our state aid goes.”

A lengthy presentation covered all of the personnel and costs that are included in the operations and maintenance portion of the budget. The bottom line is that the district needs a new bus and it will be costly. A discussion about aging out the transportation fleet revealed that it was a line item that was cut from the budget several years ago and not reintroduced.

The next meeting will cover a presentation about what is included in the budget for education and programs. The budget presentation is also available at haldaneschool.org.