Philipstown pets and their owners are about to lose a friend. Reigning Dogs and Cats Too will close its doors on April 1, although its owners hope someone will step up and take over the popular Main Street, Cold Spring pet supply business. “I’m really being forced to let the store go for health reasons,” co-owner Mary Jane Nagel told The Paper recently. She owns the business along with her partner Susan Elliot-Nagel.

Nagel said they came to Cold Spring in 2000 because a good business opportunity presented itself in March of that year. At the time they were negotiating a lease that would have resulted in them operating a pet supply business in lower Manhattan opposite the World Trade Center. But fate intervened. “Back in Ireland” was up for sale at 49 Main St. in Cold Spring and they purchased it — operating that business until 2013. “But what I really wanted was to run a pet store,” she said. Less than five years later she realized her dream. 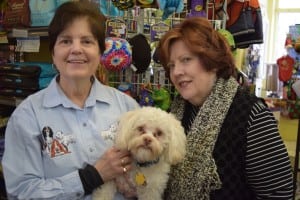 Mary Jane Nagel, left, and her partner Susan Elliot-Nagel with Buster, owners of Reigning Dogs and Cats Too, which will close April 1

Elliot-Nagel said that when they close the doors in April what she will miss most will be “the loyalty and support the community has given us” over the years. Her partner has a slightly different view. “I’m going to miss the dogs,” Nagel said.

Asked if she will miss the cats as well she laughed and said, “The cats don’t come in the store — just their owners.” She said that dog owners have told her that when they walk past the store at night, their dogs often tug on the leash and try to enter the shop even though it’s closed — no doubt due to the treats they know are always on hand inside.

For Nagel, one of the big highlights of their years in Cold Spring came when Animal Planet filmed a pilot episode for the series “Underdog to Wonderdog” inside Reigning Dogs and Cats Too and at a few other Cold Spring locations. She also spoke with pride about their first-place finish in the window display competition held as part of the bicycle-oriented “Pedal Into Spring” event held in the village in 2013.

The pet supply market has changed over the years according to Nagel. “More and more, pet owners have become very knowledgeable about pet food, its ingredients and where it is sourced,” she said. She also feels that many owners now favor shopping local rather than at big box stores, which were initially very popular. Despite being a smaller operation, Nagel said that Reigning Dogs and Cats Too’s prices are lower than some of the big box outlets.

Nagel hopes the business won’t simply close. “We’ve become a general store for local pet owners and we really hope someone will take it over.” She feels strongly that the store is more than just a business — that it provides a community service. “We do things like post lost dogs and cats on our Facebook page and we spread the word among pet owners regarding product recalls,” something she said is a fairly frequent occurrence. “The village needs a store like this,” she said.

Twenty-seven-year-old Greg Pagones is bringing a fresh perspective to Cold Spring’s Depot Restaurant. He became a partner in the business in December. “We’ve started tweaking the menu; anything we didn’t make in house was taken off.”

Frozen foods are now a thing of the past, he said. “The fish and chips are a good example. We used to use frozen fish; now we get fresh cod and batter it ourselves.” The fried chicken dinner also used frozen poultry in the past — but no more. “We now serve a half-chicken dinner. Fresh chicken is brined for three or four days — and it makes all the difference in the world,” Pagones said. 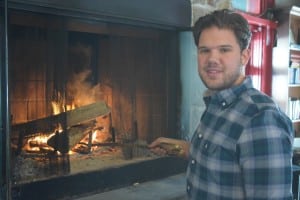 New co-owner Greg Pagones is already making his mark at the Depot Restaurant.

The bar is also evolving. “We’re working in a lot of local beers, such as from the Sloop Brewing Company in Wappingers,” Pagones commented. “We’re looking north, using beers you won’t find in the city.” Another new local beverage is Dutch’s Moonshine, which is distilled in Pine Plains. “The distillery was just reopened last year. It’s the same site that was used for bootlegging in the 1920s.”

The Depot’s décor will slowly begin to take on a new look as well. The booths will be redone soon and a new bar top will be installed.

Pagones said that more than anything, he wants customers to feel comfortable at the Depot. “I want to offer great customer service and great food. I want customers to feel like they’re visiting a friend’s house,” he said. “My philosophy is to take care of people … and if we do that, changes in décor and everything else will fall into place.”

The Depot’s new co-owner said he got his start in the business working in restaurants in high school and college. He has also run his own restaurant, Barbecue Red, in Wappinger Falls, an experience he refers to as his “master’s degree” in restaurant operations.

Pagones also helped open new restaurants including the Ice House, and it was there that he met the Depot’s longtime owner Tom Rolston, who is part owner of the Poughkeepsie riverfront pub. “Tom is still involved in the background (at the Depot) and we make big decisions together,” Pagones said, “but I make all the day-to-day decisions.”

This is the 30th year of operation for the Depot, which Rolston established in the historic train station in 1985.