Three candidates vying for two trustee slots on the Cold Spring Village Board traded views on priorities, revenue, policing and more Monday night (March 2) at a forum that prompted no heated disagreements but revealed individual attitudes and sometimes, concurrence by two out of three contenders — although not necessarily the same two.

Philipstown.info sponsored the event, which featured candidates Marie Early, Bob Ferris and Fran Murphy, and occurred in the Haldane School music room, with a separate round for the two mayoral candidates. The election takes place March 18.

Each trustee contender began by outlining reasons for seeking office.

Ferris, a Putnam County Sheriff’s Department investigator with 34 years’ tenure, said, “I’m running for trustee because I see what is not going on in the village … We need to get some things done. I want to bring my experience and expertise” to the table, to “listen to the people,” and to deal with both quality-of-life concerns and major problems. Ferris is on the village government’s Parking Committee and is running on the VOTE Party ticket with mayoral candidate Barney Molloy. 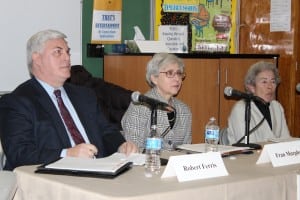 Ferris, Murphy and Early (Photo by A. Rooney)

Murphy, originally from Boston, spent 40 years in business and related fields, including serving as a high-level administrator at Baruch College, and was known, she said, “for getting the job done.” After retiring, she began volunteering in the Village Hall. “I’m running because I wanted to be involved in the village,” she said. “Being involved means it’s time to stop complaining about what’s going on and to start doing something. We do have a lot of issues in the village. One of the things we need to do is plan for the future … so we’re not just patching up problems as they come [along].” She is campaigning as an independent, with no running mate.

Early spent years as an executive at IBM and Morgan Stanley. Her family runs the local hardware store, where she puts in hours, and she has volunteered on the village’s Special Board for a Comprehensive Plan; Historic District Review Board; Zoning Board of Appeals, which she chairs; and Code Update Committee. “I care very deeply about the village,” she said. “With my skills, professional experience and history of dedication to the village, I feel I can make an even greater contribution as a trustee.” With mayoral hopeful Dave Merandy, she forms the People’s Party ticket.

Asked about priorities, Early replied, “I think one of the biggest problems is the myriad of capital improvements,” at some $10 million. “That’s a daunting task,” and the first necessity is prioritizing them and finding funding, she said. For the latter she proposed consulting with other municipalities on their funding and treatment of similar projects. Other revenue-related tools include establishing a grants committee, tapping the talents of residents and possible consolidation or “sharing services with neighboring communities” to cut expenses, she said.

Early advised taking up the most urgent needs first. “Fire safety — I might put that high on the list, along with the dams” in the water-supply system. “I don’t think we want the dams collapsing.” Early also noted that water flow is insufficient “to fight a fire in this building,” where hundreds of children attend school.

Ferris thought the “highest priority is to have the proper team in place” because otherwise “nothing is going to get done.” As an example of too-slow progress, he cited the Main Street improvement project, with designated funding earmarked, pending since 2006. Cold Spring deserves a Village Board prepared “to do the job and get the job done,” he said. As another goal, he mentioned informing citizens of the unfolding process of cleaning up toxic coal tar at the Cold Spring Boat Club. “That’s a large project,” he said. “There’s a lot of miscommunication” when “there’s contamination down there.”

The audience at the forum (Photo by A. Rooney)

As a priority, Murphy called for correcting a failure to adequately plan for capital projects. “We would not be in this situation if we knew what was coming down the pike,” she said. The village must survey the state of equipment and departments and “then figure out where the money is coming from.” She also recommended avoiding a 1-2-3-4-5 task-setting mode in favor of tackling certain major projects simultaneously, with each Village Board member taking responsibility for one or more. “It doesn’t have to be that we do them one at a time,” she said. And, she emphasized, “We can’t have sacred cows anymore. We need to be able to look at everything, prioritize everything.”

“To increase revenue in a village is kind of difficult without taxing people. And I surely don’t want to be taxing,” Ferris said. One possible income-generator is selective metered parking, he said. “I’m for meters in the right areas.” Thus, he explained, “we want to get commuters to park where they belong. But meters everywhere in the village is not the answer.” Visitor vehicles also contribute to clogged streets, and he claimed Carmel could do more to deal with tourism’s downside. “We should be getting more money from the county for tourism,” he said. “We take a hit from tourism.”

Early declared, “I would not be for raising village taxes.” Also, “I’m not in favor of meters, but I would not condemn them quite yet,” she said. “I believe the parking problem that has been expressed is a weekend, Main Street parking problem,” not one found daily or beyond a narrow stretch of Main Street. To aid in revenue overall, along with her previously stated other ideas, she proposed efforts to convince county, state and federal government representatives “to partner with us to look for opportunities for raising money to fund capital projects.”

Murphy supported use of parking meters “to an extent” but warned that putting meters on Main Street could lead to problems on side streets where, she predicted, “residents will have no parking at all.” She likewise suggested raising fees for large tourism boats docking at the waterfront. “We also need to look at sharing some resources,” she said. “There’s got to be a way we could consolidate some of our services.”

Ferris was wary of abolishing the Cold Spring Police Department. “I believe we need a police department here,” he said, although “that’s not my decision.” He said the village needs to know what residents want, what the police cost, what income they produce, and how other communities handle policing, and that “we need to bring the police department up to the 21st century.”

Murphy said, “I believe we need a police department” but that the village also should look at shared services with the Sheriff’s Department. She also called for more communication about police operations. “We don’t know” what’s happening, she said. “People have a right to know what the police do.”

Early said the village should investigate whether the Sheriff’s Department or the Cold Spring police force offers the best option. “Yes, we need police services. Who provides them, I think, is a good question” to investigate, she said.

On another issue, unanimity reigned. Questioned whether they would consider allowing more public and revenue-producing use of the Cold Spring Boat Club site, while still accommodating the club (which now occupies village land rent-free, exclusively), all three candidates answered, in sequence: “Yes.” “Yes.” “Yes.”