Differences of degrees rather than huge divides separated Cold Spring mayoral candidates Dave Merandy and Barney Molloy Monday night (March 2) at a forum where they concurred on the need to consider local government consolidation, opening the Cold Spring Boat Club and Village Garage sites to public use, and inter-municipal cooperation to construct a new firehouse.

Molloy, running as the VOTE Party with Bob Ferris, a candidate for trustee, and Merandy, who forms the People’s Party ticket with trustee candidate Marie Early, both bring substantial government-related experience to their campaigns. Merandy, who operates a construction firm, is a member of the Philipstown Town Board and formerly was president of the Haldane School Board.

Molloy chairs the Cold Spring Planning Board and is on the village Code Update Committee, works for the Westchester County Board of Legislators, and previously held positions with private businesses and nonprofits. Merandy cited his school board success in completing complicated and pricey improvements; Molloy highlighted his role in getting the long-controversial Butterfield redevelopment project to the point of public hearing, nearly culminating a multi-year Planning Board effort.

Both men backed the consolidation of government functions at a time when New York State is pressuring municipalities to cut and streamline. However, they chose different initial targets. Molloy picked the village police, while Merandy favored the building department. With a population under 10,000, Philipstown has three justice courts, two highway departments, two village governments, one town government, four fire departments and two school districts. 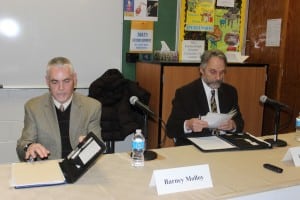 He described the Cold Spring Police Department as “low-hanging fruit” ripe for consolidation, “as difficult as it may be” to imagine. Of the overall village budget of $3.8 million, some $1.5 million comes from taxes, and of that $1.5 million “almost half a million is dedicated to police services,” Molloy said. “That right there is the first place we could look for some type of consolidation, some type of sharing of services.” He observed that “we have the sheriff’s department, we have the state police” and “we’re going to have to look at what police services cost” Cold Spring.

Merandy proposed that “everything should be looked at,” with a review of “every department there is, to see whether or not it’s feasible to do it, or whether or not it makes sense financially” to consolidate. To begin, he said, “one area … is the building inspector [offices].” He recalled that last year the Town Board offered to merge the town’s department with the village counterparts. (The idea foundered when opposition surfaced in Cold Spring.)

Merandy doubted that replacing the village’s part-time police officers with the Putnam County Sheriff’s Department would save money. “If we have to hire full-time sheriff’s” deputies, plus supply their cars, “I think the cost would shoot us over $400,000 in seconds,” he said.

The village government owns two key properties — the Boat Club and Village Garage parcels — along the Hudson and is negotiating with the state over control of a third, Dockside Park.

At the Village Garage, perched on a bluff, equipment has “a beautiful view of the riverfront,” Molloy observed. It “really is an underutilized property. That is an opportunity, and when we look at consolidation of services, sharing services with neighboring municipalities, it is something we should consider. That is a valuable piece of real estate that could be generating revenue for the village as well as providing amenities,” and garage functions “should be moved off the site,” he said.

Merandy similarly said that “one of the most beautiful pieces of property” in the village houses the Village Garage. “I’d definitely be open to moving that,” he said. The challenge, he added, is determining how to do so and join with others. “It’s easy to say we’d like to take over that property and move but we have limited space in the village and I’m not sure where that would go,” Merandy said.

According to Molloy, at Dockside, even if the village were to manage it day to day, “there’s really not a lot we can do with that property,” given the state ownership. “It is dedicated parkland,” and the village could not install a permanent income-producing building there, he said, and whatever else it attempted would probably not offset the costs. Moreover, “we have unrestricted access to the site now and it’s on the [state] park department’s dime. I’d be very cautious.”

Dockside offers incredible views “and it’s something I’d like to preserve” Merandy said. He urged further discussions with the state to see if Cold Spring could acquire the site. “If we could own the property, I believe we could generate money from it,” perhaps from booths leased to vendors around the edge, leaving the views and open space intact, Merandy said.

Both candidates indicated public sharing of the Boat Club site is in order and that the club might provide the village with ways — their approaches differed — to raise revenue.

Merandy pointed out that some residents own kayaks or other small boats and need a facility, too. “I’d hope something could be worked out with the Boat Club” for greater access, he said. “It’s village property.” He also wondered about Boat Club membership. “I’m not sure how many are village residents. It’s something I’d like to know. I think there should be some type of a fee generated — nothing exorbitant — [charged] to out-of-towners that are either in Philipstown or from out of state or wherever,” he said. “I believe a small fee should go to the village.”

Molloy defended the Boat Club as “an integral part of this community” for 60 years. “But the DEC has to do the cleanup,” he said. “I think the village has dropped the ball” about helping the Boat Club minimize the coming disruption. “We need a partnership with the Boat Club,” Molloy said. “We have to find ways to help the Boat Club to help us to succeed, but at the same time allow all residents and our taxpayers to enjoy access and enjoyment of our waterfront.”

Merandy praised the CSFC as “a company that’s really conscious of cost. They really run a tight ship,” he said. Nonetheless, he found their recently presented data lacking. “There is a need for a new building,” he declared. “We have to come up with a number people are comfortable in spending. There is no way the village is going to give an OK of a project that size” when several other crucial and expensive infrastructure projects also loom.

“I think we don’t have enough info,” he continued. When advocates “start throwing numbers around” with few details, “it doesn’t bode well for a project like that.” He suggested the village government “partner with them” and “a committee of some sort” be established, although “it didn’t seem like the fire company was willing to work with the village or other community members when someone asked that” at a public meeting.

Moreover, Merandy said, the project should include something “that works for the village also — meeting space or whatever — and that makes it more palatable as a village as a whole.” He also said that a new firehouse need not be in Cold Spring. “I’m willing to look at any possibility.” Despite his criticism of the CSFC’s financial data, “I do applaud them for getting as far as they did,” he said.

Molloy said “the issue of the firehouse presents a failure of the village government.” In getting architectural plans drawn up pro bono, the firefighters “have gone as far as they can go,” he said. He noted that the existing firehouse on Main Street stands over old auto garage pits. “God knows what you’re going to find percolating under that building” and then the DEC would intervene in another eradication, he said.

Thus, “I almost think we have to look at an alternative site,” consider a fire district, and work with other governments, he added. “I think the answer lies outside the village. Whether people are willing or able to address it at this point, that’s another matter. It’s going to take a collaborative effort,” as well as determining costs and funding sources, “and that might dictate where we build and what we build and who we partner with.”

Economic concerns included the boon — or bane — of tourism.

Merandy argued that “if we want more and more tourists to come here, there has to be a benefit to the community.” In that regard, the county refusal to share sales tax revenue “is really the problem,” he said. Putnam does not return to its municipalities any of the sales tax they collect. “Whatever we’re moving ahead with that’s going to generate money, we have to see what the impact is on the residents of the village,” Merandy said. But if Putnam County shared sales tax, “we could promote businesses. It would actually make more sense because we’d be getting something out of it.”

Molloy said the proposed Fjord Trail will bring more visitors, plus “a whole host of economic development opportunities. But it also brings a lot of problems that we’re going to need to address.” He recommended development of additional economic drivers, beyond tourism and Main Street, such as home-based businesses compatible with the historic village and its residents. “We have to change our zoning code to energize that type of activity,” he said. Other possibilities include shared work space and live-work quarters, Molloy added.

Both candidates said the mayor plays a unique part in village governance, acting as the chief administrative officer and ensuring accountability, although remaining one of five members of the Village Board of Trustees.

The trustees constitute “the legislative body of the village,” Molloy said. “They set policy, determine the budgets, oversee the executive. The day-to-day responsibility for administering and running the village rests with the mayor. Under the law, the mayor is responsible … That is the distinction.”

Merandy said the mayor sets the agenda and “has to have control of the board, has to work with the board, has to build a trust with the board.” If elected, while collaborating with the trustees he also promised to seek citizen input, as the school board did in holding public votes on major spending decisions. “Going forward with anything in the village I would also recommend that to my board, that would be my stance, that everything go to the people for their support,” Merandy said.