Matteawan Gallery presents Ellen Siebers: Soft Nails, an exhibition of small-scale oil paintings opening with a reception 6 to 9 p.m. on Saturday, March 14, and on view until April 5. The exhibition coincides with the 2-year anniversary of Matteawan Gallery, which opened in March 2013. 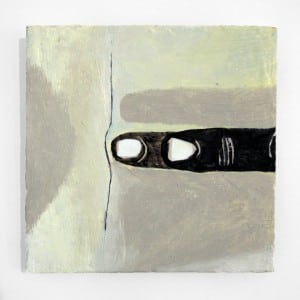 Siebers’ paintings combine abstraction and representation in unusual ways. Her current series is inspired in part by the German abstract painter Blinky Palermo, as well as by the Shakers religious sect, known for their simple lifestyle and austerely elegant furniture and architecture.

For her paintings she uses ¾-inch plywood panels with beveled edges and makes a traditional gesso out of powdered marble as a ground for oil paint. Her panels vary in size from 6 to 22 inches, but they are always square. For Siebers the square panel presents an ambiguous space that is as much a window as it is an object.

Originally from the Midwest, Siebers recently moved to the Hudson Valley from Brooklyn. In 2014 her work was included in a solo exhibition at Bushwick Open Studios, curated by Peter Shear, and in group exhibitions at Smart Clothes Gallery and the Prince Street Lofts/Verge Art Fair, also in New York. Siebers received an MFA in painting from the University of Iowa and a B.A. from the University of Wisconsin Madison. She is currently an adjunct professor of art history at the College of Mount Saint Vincent in the Bronx.