In a free-wheeling exchange that did not solve major state problems but allowed a spirited exchange of views, New York State Assemblywoman Sandy Galef and constituents last Saturday (March 7) discussed state budget and tax matters – especially school taxes, other education issues, political corruption in Albany, gun control, and a sprinkling of other topics.

The forum drew about 35 attendees to the Desmond-Fish Library in Garrison. It occurred as the State Legislature – the lower house, or Assembly, in which Galef serves; and the upper chamber, the Senate – sought to finalize their respective 2015 budget versions by a Thursday (March 12) deadline. Various complications, including the arrest of the long-standing speaker of the Assembly on fraud charges, made the legislature “a little bit in disarray for a while,” Galef said.

She described the budget-setting itself as “traumatic… We’ve been through very difficult times,” with deep cuts, in the recent past, she said. Now, as the situation improves, “each year we’re able to add more” back to budget lines previously reduced, but the pressures continue. Gov. Andrew Cuomo has kept the state government under the 2 percent tax-increase cap and “we’ve really ratcheted down” overall, she explained.

“The education part of the budget seems to be the most controversial,” with contention over charter schools, teacher evaluations, funding questions, and more, Galef noted. School taxes were on the minds of several attendees, including Robert Dee, who chairs the Philipstown Zoning Board of Appeals, and Town Board Member Mike Leonard, who both live in Continental Village, in the Lakeland Central School District. 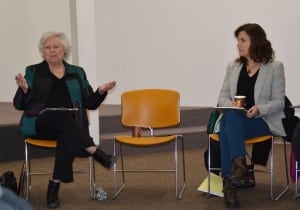 Dee and Leonard said that Lakeland school taxes recently went up 7 percent, continuing a long, upward spiral. “In Continental Village we’ve been getting the business for years,” Dee told Galef. He attributed much of the problem to property assessment methods, saying that modest Continental Village houses are lumped together regionally with Garrison mansions and the results artificially inflate Continental Village values. “The way it’s being done is unfair. I’m asking somebody to change it,” Dee said.

“Using property taxes to fund schools is the most regressive way” to fund education, asserted another participant, who said he moved from Cold Spring because of high taxes.

Galef observed that Lakeland covers all or part of six jurisdictions and straddles Putnam and Westchester Counties, adding to the complexities. “The only way to really get fairness is to have everybody re-assess” or get re-valuated, she said. “And re-assessment is really hard” because property owners either fear their taxes will go up or their values will go down. “You have to have the public really behind you,” for a town government to attempt it, she said. “If we all re-assessed every four to five years,” the public would become accustomed to it, she added.

“This is such a state-wide issue, it seems,” Philipstown Town Board Member Nancy Montgomery observed, wondering if the state might provide assistance for a re-assessment.

Putnam County Legislator Barbara Scuccimarra pointed to Philipstown as the only town in Putnam that has not recently conducted or taken steps to launch a re-valuation. “It’s an unpopular move for a Town Board or any government to do, but I think we owe it to our constituents to do it,” she said.

Like county government leaders, Scuccimarra is a Republican while Galef is a Democrat, as is the entire Philipstown Town Board, and Scuccimarra followed her comment about re-assessments with a call often heard in Carmel, the county seat, for relief from mandates – programs imposed by state or federal governments on lower jurisdictions.

Galef responded that if Albany covered more mandated costs, the burden merely would shift from local property taxes to state income taxes. She pointed to another phenomenon affecting local taxpayers: “People in Philipstown don’t get the advantage of the sales tax.” Unlike most New York counties, Putnam does not return to a municipality any of the sales tax collected there.

Scuccimarra said sharing sales tax, too, would only mean moving money from one tax pocket to another.

Leonard proposed that the county at least share the sales tax “overages” — the amount of sales tax income that exceeds what the county expected. “Let’s start off with the excess-sales-tax discussion” between the county and town, he said.

Some attendees objected to state support for Common Core educational demands, which Galef declined to condemn. “The Common Core goals are good,” she said. “That’s what I’m hearing. The way it was rolled out was not good.” She said she understands the need for national continuity across states, so that a fifth-grader moving from one to another can be assured of the same basic curriculum. “You want to have some kind of a standard,” Galef said.

To help fight the political corruption for which the state capitol has become infamous, Galef has again sponsored several bills, such as one to prohibit state legislators from obtaining funds to pass along to business entities in which they hold legal or official positions. She likewise advocates public financing of campaigns.

“I think we’re seeing more and more why certain things happen,” including the latest scandals, she said, blaming the mess on free-flowing campaign money and related cronyism. “I’ve seen it for a long time.” With public financing of campaigns, the climate would improve as more citizens could afford to run for office and a re-invigorated electorate turn out in greater numbers to vote, she predicted. “I think we should give it a try [statewide]. It’s good in the long run.”

A day before Galef’s forum, a vice president of the New York State Rifle and Pistol Association, a branch of the National Rifle Association, alerted gun owners that they “are encouraged to attend and express their support for 2A [Second Amendment] rights and displeasure with the SAFE Act,” New York’s 2013 gun-control law.

At least two gun-rights proponents came to the Desmond-Fish event. One, Cold Spring resident Lillian Moser, suggested a misperception exists that all Galef’s constituents back the SAFE Act. She told Galef of three Assembly bills that “we really think you should get our opinions on, what we believe, because there are people in your community that are opposed to the SAFE Act.”

The first bill would “permit the private sale or disposal of firearms, rifles and shotguns to a holder of a New York State pistol license and to certain relatives”; the second would repeal some ammunition-sale requirements; and the third would repeal a prohibition on “possession of certain large-capacity ammunition-feeding devices.”